Annie Baker: A Playwright You Need To Follow Now

With over 150 productions of her work throughout the United States and over a dozen countries internationally, Annie Baker is storming the stage near and far. In an era when female playwrights are under-represented on the stage, Annie Baker is one of the most distinguished voices in her field, with her impressive up-close dissection of everyday people.

Annie Baker once said she didn’t know you could become a professional playwright until she became one. Born and raised in Amherst, Massachusetts, Baker attended New York University’s Tisch School Department of Dramatic Writing, but not with the intention of being a playwright. During this time she only ever wrote one play, and never had it produced. She went on to earn her MFA at Brooklyn College and began to seriously write for the stage in her mid-twenties. The now thirty-four year old Pulitzer Prize winning playwright has written half a dozen plays, and shows no signs of slowing down.

She catapulted into the New York City theater scene with her debut one-act play, ‘Body Awareness‘, in 2008. Staged by the Atlantic Theater Company, it was nominated for a Drama Desk Award and Outer Critics Circle Award. ‘Body Awareness’ was followed up with her second well-received production, ‘Circle Mirror Transformation‘, with its world premiere at the Playwrights Horizon’s in 2009. ‘Circle Mirror Transformation’, following the interactions of a drama class at a local community center in Vermont, won Baker the Obie Award for Best New American Play, Performance, Ensemble and Directing. She followed up her award-winning success with the play ‘The Aliens‘. Premiering in 2010 at the Off-Broadway Rattlestick Playwrights Theater, The Aliens became a finalist for the prestigious Susan Smith Blackburn Prize and won the Obie’s Best New American Play in 2010.

It was becoming clear to the theater world and critics that Baker was an emerging playwright whose authorial voice was taking a very specific shape. Her plays deal with very simple plots, or as Baker would say, sometimes no plot at all. She has an appealing blend of the everyday moments mixed with the profound, that comes from observation. Everything from the conversations and thoughts of the characters to the clothes they are wearing contains an essence of authenticity – this could have or did happen to someone, and the audience is watching it unfold before them. 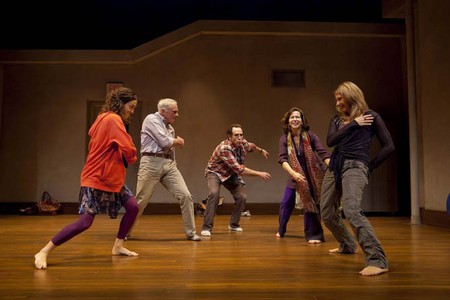 Some critics have called her style of writing ‘natural’ or ‘realistic’, but Baker believes neither of these labels are accurate or even necessary. In interviews, she describes her style of dialogue as being just real life, as though it was something that could be overhead in the local diner. The line between reality and fantasy are constantly blurred. However, as much as Baker is interested in the profoundness of everyday conversations between normal people, she is as equally as interested in silence. From a full minute of just watching a hula hoop spin in complete silence in ‘Circle Mirror Transformation’ to three hours of awkward pauses, long stares, and lifelike quietness, Baker is not afraid to say nothing. In her plays, it is often in the silence where most of the action is happening.

As her career progressed and she wrote the critically acclaimed 2012 adaption of Chekov’s Uncle Vanya in 2012, Baker became known for the interesting places she put her characters. She never sets a play in the same location twice. Nor does she want her audience to sit down and be immersed in a place they have seen on stage before— kitchens, living rooms, bedrooms, restaurants or offices. Her locations often evoke a sense of despair and loneliness. The locations her plays are set in have included the rowed seats of a movie theater, a windowless dance studio, and bleak back porch in a coffee shop in Vermont.

Most recently Annie Baker won the 2014 Pulitzer Prize in Drama for her play, ‘The Flick’. Premiering at the Playwrights Horizons in March 2013, ‘The Flick’ is a three hour journey into the lives of three young misfits working at a single screen movie theater in central Massachusetts. 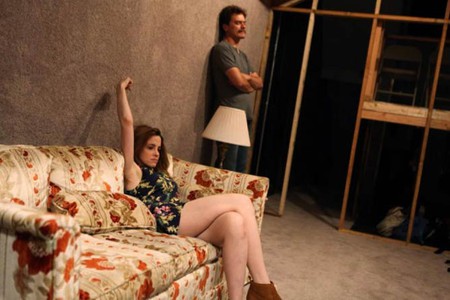 Not only is Baker an accomplished playwright, she is also a teacher at New York University in Tisch School’s Dramatic Writing Department. She managed to teach at the same time as being a 2014 Guggenheim Fellow, a New Dramatists Fellow, and a member of the Sundance Institute Theater Lab. She resides in Brooklyn and says that she often takes off two years between writing plays, which means 2015 should be seeing a new play by this talented and awe-inspiring playwright.

Courtney Antonioli is a playwright, producer and storyteller on stage. Find out more at www.courtneyantonioli.com.