An Illustrated History of ‘The Miseducation of Lauryn Hill’ 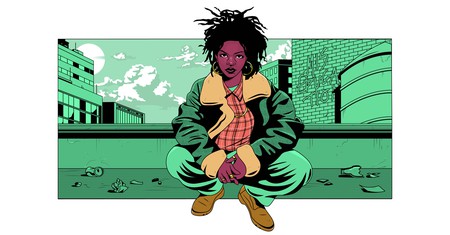 The Miseducation of Lauryn Hill was groundbreaking when it was released 20 years ago and continues to be highly influential. The album challenged the male-dominated world of hip-hop, establishing the Fugees frontwoman as a pioneer in the music industry.

Lauryn Hill was already a big star when she released her first – and only – solo studio album.

The singer fronted Grammy Award-winning hip-hop group the Fugees until they split in 1997. The band originally formed in the late 1980s in South Orange, New Jersey, when Hill started making music with high-school friend Pras Michél. His cousin Wyclef Jean joined the group later and they scored a record deal in 1993.

The Fugees recorded two albums. Blunted on Reality (1994) was their first, but it was their second LP, The Score (1996), which proved to be their breakout. Featuring hit singles ‘Killing Me Softly,’ ‘Fu-Gee-La’ and ‘Ready or Not,’ the record went multi-platinum and is considered one of the greatest hip-hop albums of all time.

A year after the Fugees disbanded, Hill released her iconic solo album, a masterful blend of hip-hop, soul, R&B and reggae.

With it, the singer shook up the male-dominated world of hip-hop, one that was obsessed with violence and could barely contain its contempt for women.

Her songs were a blazing feminist statement; a rousing affirmation of love, religion and black womanhood that beautifully detailed female experiences in a way that was rarely heard in the genre.

The album called out promiscuous men in ‘Doo Wop (That Thing),’ touched on motherhood with a tribute to her newborn son in ‘To Zion,’ and dissed her ex-Fugees bandmate and former lover Wyclef Jean on ‘Lost Ones.’

Her lyrics were highly personal, but her music was also framed within a wider context of black struggle – the album’s title was inspired by Carter G Woodson’s 1933 book The Mis-Education of the Negro, a critique of how black children were taught in American schools.

The album was an instant hit and shot to number one in the US Billboard chart, breaking the record for first-week sales by a female artist at the time.

The singer went on to smash more records, including becoming the first woman to be nominated in 10 categories in a single year at the 1999 Grammy Awards.

That year she became the first woman to win five times in one night as she took home the awards for Album of the Year, Best R&B Album, Best R&B Song, Best Female R&B Vocal Performance and Best New Artist.

The Miseducation of Lauryn Hill is now regarded as one of the best albums ever made. In 2015, it was included in the US’ National Recording Registry – a list of recordings that “are culturally, historically or aesthetically important” – by the Library of Congress.

The album propelled the singer to superstardom but overwhelmed by the pressures of fame, she retreated from the public eye and has kept a low profile ever since.

Despite this, her legacy – as one of the first female rappers to give a voice to black womanhood in hip-hop – continues to live on.