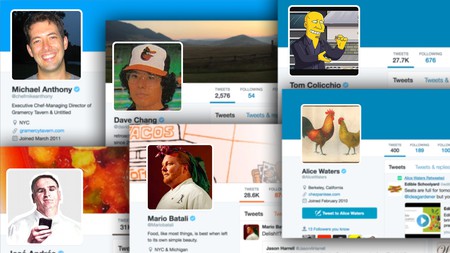 Chefs, as we’ve all been told ad nauseum for the past few years, are the new rock stars. They have increasingly enormous visibility, on TV and various social media; the best-known among them are de facto celebrities.

And as befits anyone with influence in current times, some chefs are using their reach to enlighten their followers to make sure they’re aware of what’s happening in the world right now—and how it affects all of us. Twitter is now more important than ever, as the preferred medium of certain people with suddenly increased global influence. So it follows that more people are using it to amplify their voices. The chefs below are leading conversations. Their restaurants are great; their collective world awareness is even better. And their views are relevant. Food is political: Precious few things influence our communities, our health, our societal values more than dining does. These chefs are bringing important issues to our attention, and we salute them for it. If you’re not yet following all of them, get on it!

Because this Spanish-born, Washington, D.C.-based chef is America’s finest tapas wizard. Andrés operates more than a dozen restaurants throughout the country, including three in D.C.: Jaleo, Bazaar, and Minibar, which holds two Michelin stars. Not among them: A restaurant in Donald Trump’s new D.C. hotel, which Andrés backed out of after Trump publicly made disparaging statements about Mexican immigrants. Trump sued; Andrés countersued. He’s willing to go head-to-head with a very powerful figure over what’s right and decent.

Because Anthony is not only the executive chef of this editor’s all-time favorite restaurant in New York City (which would be Gramercy Tavern) and the equally wonderful Untitled, he’s also a truly lovely human being. A master of retweets, he’s shouting loud to support justice and the Women’s March just as much as he supports his fellow chefs.

Because his restaurants, especially Babbo and Del Posto remain some of NYC’s best, and he suffers no fools in the world or in his twitter feed. Recent posts to his 1.7 million followers include “I think we are at a point where even the little hatred needs to be admonished lest it becomes an acceptable war cry for a large group” and “I’ll be me, you be you and we will tolerate no racism, xenophobia, homophobia, hatred or violence together. Cool? That’s as good as I can be.” It’s as good as any of us can be, really.

Because Chang has always been a culinary rebel, beloved by the food world’s cool kids, and is never afraid to speak his mind. He’s putting his money where his mouth is, too: A recent (re)tweet told of the new fried chicken at his restaurant Momofuku Nishi, mentioning a portion of sales proceeds benefit the Southern Poverty Law Center. As if we needed an even better reason to gorge ourselves on fried chicken…

the new fried chicken at nishi by @pokpokpdx and the nishi team. portion of proceeds to @splcenter. info: https://t.co/lO26njEoIF pic.twitter.com/cwEG7Vbdpi

Because he just expanded his empire with the brand-new Fowler & Wells, a sensational downtown Manhattan restaurant providing excellent comfort food at a time many of us are needing exactly that, and because this original celebrity chef is outspoken about his views and heavy on the retweets. Close to a million people are listening to him on Twitter. Be one of them.

Because in addition to Chez Panisse she also created the Edible Schoolyard program, and other childhood nutrition and sustainable food programs. Long known for her social activism, Waters sure isn’t going to stop now…