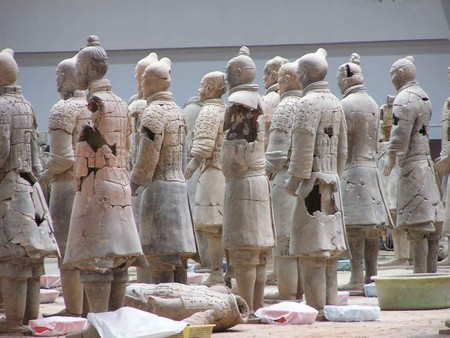 In a serious case of next-level breaking the ‘don’t touch the artwork’ rule, an American museum-goer has actually stolen the thumb off one of China’s iconic Qin dynasty terracotta warriors.

The priceless statues are a highlight of the Chinese art historical canon, having been buried alongside the country’s first-ever emperor over 2,000 years ago. However, that did not stop 24-year-old American Michael Rohana from trying to steal a piece of the action.

During a December 21st ugly sweater party at Philadelphia’s Franklin Institute, Rohana snuck into the closed-off exhibition space where the statues were on display. He then used his phone flashlight to check out the army, took a selfie with the cavalryman in question and then proceeded to break off the thumb of its left hand and go home to Delaware with it.

FBI says a US man stole the thumb of a 2,200-year-old Chinese terracotta warrior statue being displayed at the Franklin Institute pic.twitter.com/ZwzRrSq8V2

When the artwork was later discovered broken, F.B.I special agent Jacob B. Archer was put on the case and it didn’t take him long to track down the thumb-breaker. He visited his house shortly thereafter and asked if Rohana might have anything to hand over. Rohana immediately admitted he had the thumb and presented it to the officer.

Despite the swift solving of the crime, China was rightfully angered by news of the defacement. An official from the Shaanxi Cultural Heritage Promotion Center called on the US to ‘severely punish the person who committed this destruction and theft of mankind’s cultural heritage.’

So far, Rohana has been charged by a Philadelphia court with theft of an artwork from a museum, concealment of the artwork and interstate transportation of stolen property. The statue in question was one of 10 terracotta figures on display at the institute.