Alexa Meade's Art Photos When two paintings fall in love | Courtesy of the artist
While she was busy planning her future in politics on Capitol Hill, this young D.C. native discovered a technique while painting on one of her friends for a college art project that would forever change the course of her life. By painting directly onto her subjects (whether that be a person or a piece of toast) and mimicking light and shadow, Meade is able to trick the eye into thinking it’s looking at a 2D painting when it is, in fact, looking at an undoctored photograph of a real 3D object or person. We talked to Meade about her creative process, past projects, her psychedelic home known as The Funhouse House and just how long it really takes for her models to wipe off all the paint after a shoot.

What made you decide to take that huge leap from a career in politics to pursuing art instead?

At that point, I had really carved out a path for myself in politics. I had interned on Capitol Hill for congressmen and senators for four summers, and I did press for the Obama campaign. I had thought it was my dream to run for political office…and then I came up with the idea of putting paint down on shadows, and I realized that I had found something really interesting. I didn’t quite understand what it was, and it just seemed like such a beautiful mystery and puzzle to learn what was going on and to experiment with it. It required me to essentially teach myself how to paint through the process of finding a solution. I just totally dove and fell right into it, so it was very much by accident.

You discovered your technique while experimenting on your friend by painting directly on him. What was that moment of realization like?

I thought that my camera was broken! It just didn’t make sense, like maybe the contrast was weird on the screen. I had my friend take a picture with his cell phone camera, and it also did that, and then I repeated the experiment. So it took a lot of wrapping my brain around all sorts of things to figure out how to make it happen, especially the second and third time I did it. What is the relationship like between you and your canvas – a living person?

It’s interesting because artists are sometimes known for being temperamental and moody, and I can be that person, but if I’m painting on another person and I come into the studio with that energy, that’s going to rub off on them, and then the painting will just turn out looking really sad. My subject becomes a reflection of my mood, which I guess is typical when an artist paints something on canvas. They bring their attitude and their mood to it, and the painting might come out looking somber. But when the person I’m painting comes out [to the shoot] feeling somber, no matter how I paint, the finished product will look somber.

I would imagine that would add a big level of unpredictability for you as the artist.

Huge! There’s definitely a level of unpredictability. It’s very much our two energies coming together, and we become greater than the sum of our parts. I’m feeling one way, and the model is feeling another way, so wherever chemistry happens in between is what the output is.

What do you like the most about working with live models?

When I’m doing things in the studio that don’t involve the painting on people part (like painting props), when I feel tired, I just go home. But when a model is there, I have no choice but to finish, and it becomes an adventure and a challenge that I must see all the way through. There’s something almost liberating about that. It doesn’t feel restrictive at all; I know what I have to do, and I just have to go for it. There are no excuses. 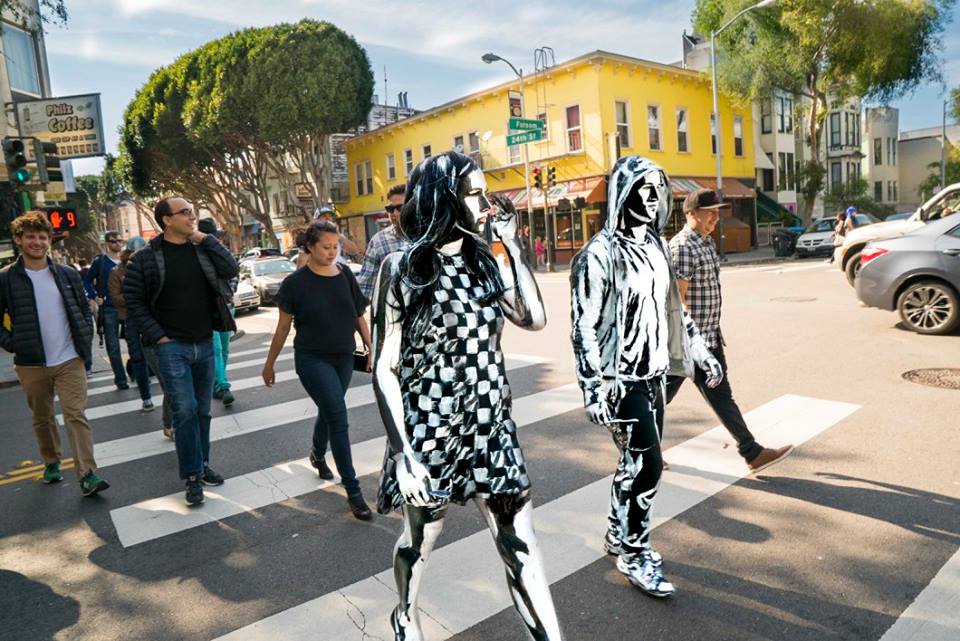 What’s your favorite part of your creative process?

There are a lot of parts that are really fun. I don’t usually take pictures of my models so much while I’m working. I like to paint them 95 percent of the way, then I’ll take a step back and take a cell phone picture and see what it looks like. That moment when I snap that first picture and I see the magic of it all coming together, that’s really exciting. The reason I take a picture at that part is because it won’t really look like anything for the first 95 percent, but then it’s the last finishing touches I do that really transform it. All of a sudden it just pops into being something totally unseen. I love showing the model the picture at that moment. Activate // Process Photo by David Branson | Courtesy of the artist

I want to talk a little bit about your collaboration with Sheila Vand on Milk: What will you make of me?, where Sheila had to lie in a pool of milk covered in paint while you photographed her. I’m assuming you had to go through a lot of milk for that?

We did. We tried to figure out a way where the first painting we did would use all white paint, so that when the paint washed off in the milk, it wouldn’t change the color. After that, we did one where we would only use orange colors which would make the milk turn orange, and then after that I would paint dark red on her, so that we could reuse milk multiple times for several different painting sessions. We also mixed in some hot water with the milk for the photoshoots because the milk had to be refrigerated so it wouldn’t go bad overnight. We didn’t want Sheila lying in rancid milk! Refrigerating the milk meant Sheila would be in a pool that was 54 degrees Fahrenheit, which would be way too cold for a human being to be in. Normally, when you’re in a cold pool, you’re able to tread water and agitate your muscles. Sheila had to lie incredibly motionless, not because she couldn’t move the paint, but because the swirls were happening around her so beautifully and any sort of disruption could just completely erase it.

Where does your fascination with image projection, mirrors, light and shadow and the combination of all of these elements come from?

I remember really noticing that stuff for the first time when I was studying abroad in Denmark my junior year of college. When I was there, it was getting closer to summer time and the angle of light at that time would be so low and the shadows would be so dramatic, and it messed with my brain because I had never experienced daylight in that way. I became really into shadows and interesting things that light can do, and shortly after that, I got really interested in convex mirrors and warped reflections. I’m not quite sure where my interest in prisms came from, but I’ve been obsessed with them for the past couple of years.

How would you describe The Funhouse House to a stranger?

It’s kind of hard to describe because it’s an art project, but it’s not part of my art portfolio. It’s more of just how I live when my boyfriend and I come together and the things that happen. We’re not making this stuff for a museum or making stuff for people to buy; we’re just making it because we have to make it. Chris Hughes [my boyfriend] is totally my muse with it. Everything we do in there, we do together. It’s totally our love child together. Every bit of the house has some sort of visual audity, illusion or thing that plays with your perceptions in some way. A lot of things are multipurpose, like the kitchen breakfast nook that turns into a dance club or the bathroom closet that [doubles as] a Nelson Mandela Memorial, which was designed by me and my friend Aza Raskin.

What made you want to share The Funhouse House on the internet despite it being the house that you live in and a personal project?

It’s my testing ground where I’m working on new optical illusions and playing with things like lights, shadow, and space, and I’ve come across a lot of really interesting phenomena. There’s five million ideas for little projects, and I’ll probably take one or two of them to somewhere larger. It just seems kind of selfish to create all this stuff and to [tell people] they’re not allowed to have intrigue. I wish that we could let anyone in, but we have our personal items and medication in the cabinet and whatever else.

How long does it take the models to get the paint off after a shoot?

It’s actually not really that bad because usually I paint on clothes, and instead of hair, I’ll typically paint on a wig so the only thing that they really need to wash the paint off of is their face and hands. The paint comes off easily; it just slimes off.

Meade is currently juggling a myriad of new projects, including a collaboration with magician David Blaine due out soon and a project based in toy design with one of Tickle me Elmo creators Rob Dubren. Want to know more about Alexa Meade or go on a virtual tour through The Funhouse House? Check out http://www.alexameade.com and http://funhouse.house/#househouse. Or for more info, follow her on Facebook or watch her 2013 TED Talk Your body is my canvas.