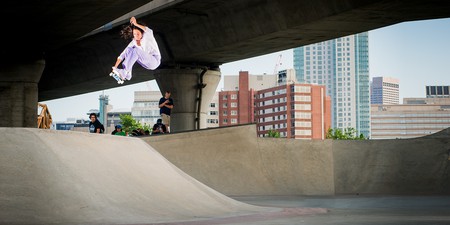 Like most children, Nora Vasconcellos made a wishlist each Christmas. One year, her list for Santa consisted of 10 items.

“This is the biggest present I got,” an excited Nora says in a home video as she unwraps a rectangular box with green bow. Seconds later, in a feat of triumph and success, the young Vasconcellos raises both hands and exclaims, “Skateboard!”

She wastes little time pulling the skateboard out of the box and testing it around the house.

“For me, skateboarding is just pure youth,” Vasconcellos said. “It’s just an excuse to continue playing as I turn into an adult.”

Vasconcellos always wanted to be a skateboarder, though she was unsure anyone would care. Turns out, a lot of people do. Vasconcellos, 25, became the first female professional rider to join the adidas Skateboarding global team earlier this year. The brand released a 20-minute digital short entitled Nora on Dec. 21, highlighting her journey from skating-obsessed child to pro rider.

Born and raised in Pembroke, Mass., Vasconcellos and her brother, Davis, spent much of their youth outdoors jumping, climbing, riding, and falling on skateboards, rollerblades, and BMX bikes. When they were inside, they would watch Rocket Power together. Skateboarding resonated with Nora the most; a sport she was willing to bleed for.

Vasconcellos continued her journey, most of the time alone, taking her bumps and bruises along the way. Skateboarding is still primarily a boys’ club, but Vasconcellos is one of the riders helping to break that trend.

“A lot of guys are intimated by a girl being at a skatepark, just as much as I’m intimidated by them being there,” she said.

But that hasn’t deterred her. Vasconcellos stands out at the skatepark—a combination of her long hair flapping in the wind as she glides on her board, her matching lavender pants and sneakers, and, of course, her skillset.

It’s the reason why other female and girl skateboarders look up to her and reach out to her on social media, asking questions about her outfits, tricks, and equipment.

Vasconcellos isn’t a kid anymore, but that doesn’t mean she can’t act like one. She still rides with the same fervor and excitement she did when she first stepped on her new skateboard that Christmas morning.

“What makes Nora, Nora? To be honest, I would just say her smile and her personality,” said Paul Shier, adidas Skateboarding team manager. “It’s her joy riding a skateboard. You can be the best skater in the world and have a sour dial; no one will give a shit about you. Nora is good at skating, has an amazing personality, laughs when she’s skating.

“You can see she’s enjoying herself. To me, that’s what makes her special.”