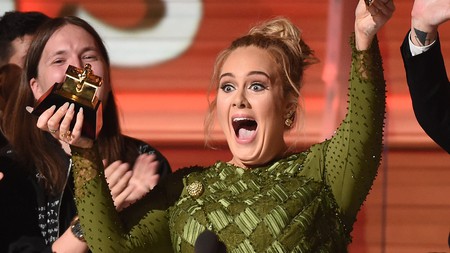 The 59th Annual Grammy Awards arrived on Sunday evening, bringing a predicted pair of sweeps by Adele and the late David Bowie, as well as a blizzard of star-powered performances, some magnificent, some forgettable, and some that weren’t afraid to get political.

“I know it’s live TV, I’m sorry, I need to start again. I fucked up. I can’t do it again like last year. I’m sorry for swearing and I’m sorry for starting again… I can’t mess this up for him.”

No one could have expected Adele, one of the most revered vocalists of the past two decades, would have to stop her tribute performance of George Michael’s 1996 hit song “Fastlove,” but after last year’s piano technical issues, a visibly upset Adele wasn’t going to let history repeat itself. Thankfully, the second start went off without a hitch, and Adele received the approval of the audience and the praise of celebrities online.

#GRAMMYs: @Adele starts her George Michael tribute over, says "I can't mess this up for him." https://t.co/g0DflCvEzK pic.twitter.com/ByvdZO7722

Despite cusses and nearly tears, the rest of the evening went as perfectly as possible for Adele, who took home a trophy in each of the five categories she was nominated—including winning Song of the Year, Record of the Year, and Album of the Year, just as she did in 2012.

Yet Adele’s success meant that Beyoncé once again failed to secure the year’s best album award, just as her self-titled album lost to Beck’s Morning Phase in 2014. When taking the stage for the Grammys’ top prize, Adele dedicated her speech to Beyoncé and the impact of Lemonade.

“I can’t possibly accept this award, and I’m very humbled and very grateful and gracious, but my life is Beyoncé, and the album to me, the Lemonade album, Beyoncé, was so monumental, and so well thought out,” Adele said, with both her and Beyoncé tearing up. All of us artists fucking adore you. You are our light. And the way that you make me and my friends feel, the way you make my black friends feel is empowering, and you make them stand up for themselves. And I love you. I always have. And I always will.”

Then, taking a page from Mean Girls, Adele broke the Grammy in two (as seen above) and reportedly gave half of her award to Beyoncé. Then, during her stop in the press room, Adele asked the eternal question: “What the fuck does she have to do to win album of the year?”

“We all experience pain and loss, and often we become inaudible,” Beyoncé said while accepting Lemonade‘s singular win. “My intention for the film and album was to create a body of work that would give a voice to our pain, our struggles, our darkness, and our history.

“To confront issues that make us uncomfortable. It’s important to me to show images to my children that reflect their beauty, so they can grow up in a world where they look in the mirror—first to their own families as well as the news, the Super Bowl, the Olympics, the White House, and the Grammys—and see themselves. And have no doubt that they are beautiful, intelligent, and capable. This is something I want for every child of every race. And I feel it’s vital that we learn from the past and recognize our tendencies to repeat our mistakes.”

David Bowie was another big winner, earning four Grammy awards, including Best Rock Performance, Best Rock Song, and Best Alternative Music Album. Amazingly, Bowie only had three Grammy victories prior to this posthumous honor, including both a Lifetime Achievement Award and Hall of Fame Award, as well as 1985’s Best Music Video.

While seemingly every artist to exist performed at this year’s Grammys ceremony, the night’s two best performances went to Beyoncé and A Tribe Called Quest (along with Anderson .Paak, Consequence, and Busta Rhymes).

Performing “Love Draught” and “Sandcastles” off Lemonade, the now-pregnant-with-twins Beyoncé traded in her fierce dance sequences for a variety of references to prominent female religious figures, including the African goddess Mami Wata, the Greco-Roman goddess Venus, the Yoruban goddess Oshun, the Hindu goddess Kali, and the Virgin Mary. Put simply, it was gorgeous from start to finish.

Beyonce's full performance RT to save a life #GRAMMYs pic.twitter.com/0xtYLEC6xD

While the majority of performers slipped in slight jabs at President Donald Trump, his administration, and the general political climate of the world, never letting issues take the spotlight, A Tribe Called Quest figuratively (and essentially literally) busted that wall down.

“I just want to thank President Agent Orange for perpetuating all of the evil that you’ve been perpetuating throughout the United States. I want to thank President Agent Orange for your unsuccessful attempt at the Muslim ban. When we come together—we the people!” Busta Rhymes exclaimed before the rest of the performers burst through the backdrop, Q-Tip holding the hand of a young woman wearing a hijab and several other kids of various races, gender, and religious identities joining the hip-hop icons on stage.

.@BustaRhymes: "I want to thank President Agent Orange for your unsuccessful attempt at the Muslim ban. #GRAMMYs pic.twitter.com/Te7f4bZrGh

Performing “We The People” off their new album We Got It from Here… Thank You 4 Your Service, the hook’s lyrics provide little surprise that their performance was the night’s loudest in resistance:

Check out some of the night’s award-winners below.

Record of the Year:

Album of the Year:

Song of the Year:

Head over to The Grammys’ website to see the rest of the winners.