A Whirlwind Tour of Coppola’s Wineries 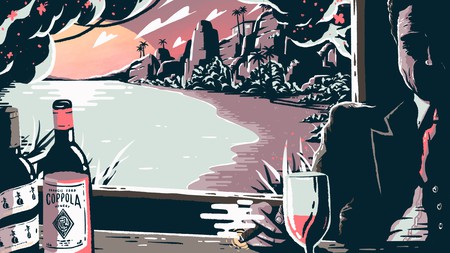 When it comes to locations, Francis Ford Coppola has mastered the art of choosing stunning backdrops for his movies that tell a story within a story. The same logic applies to all three of his wineries; each one conveys a narrative that draws from his life and films, allowing visitors to experience a grand adventure while drinking first-rate wine. So, sit back and enjoy this whirlwind trip around the Family Coppola’s fabulous wine wonderlands.

This larger-than-life wine resort doesn’t just focus on wine | © Luke Brookes / Culture Trip
Francis Ford Coppola Winery, Coppola’s first foray into Sonoma County winemaking, looks straight out of a movie set – and it’s no wonder. His long-time friend and Academy Award-winning production designer Dean Tavoularis designed the compound. Drawing inspiration from the famed Tivoli Gardens in Copenhagen, this larger-than-life wine resort offers a unique experience that groups and families can enjoy. But don’t worry, there’s plenty of drinking to indulge in during a visit. Besides the opportunity to taste Coppola’s vast selection of limited edition wines in the tasting room, there’s a full-service restaurant using local ingredients, a memorabilia-filled movie gallery where you can gaze upon the director’s Oscars and a park area with game tables and bocce courts.

Based in the wine country town of Geyserville, Virginia Dare Winery combines American folklore with the origins of American winemaking. According to legend, Virginia Dare was raised among the Croatoan Indians but was later killed because of a love triangle. It’s said her blood spilled on the soil creating “the mother vine” – a 400-year-old scuppernong grapevine believed to be the oldest cultivated vine in the world. Fast-forward centuries later, and the tale of Virginia Dare inspired the Garrett brothers to create North Carolina’s first commercial winery in 1835. It created top-selling wines before and after Prohibition but soon faded into wine history. Drawing on his childhood memories of this famed wine company – with its catchy radio jingle and beautiful woman on the bottle – Coppola wanted to reintroduce the lost brand and the uniqueness of Sonoma County wine to a future generation of wine drinkers. Now, the spellbinding tale and history are retold through this magnificent winery, which produces several inspired collections: The Legends, The Virginia Dare Showcase Wines and The Roanoke Collection, which includes a 1587 chardonnay (the same year Virginia Dare was born). There’s also an in-house restaurant, Wero, which serves cuisine inspired by the culinary traditions of North America’s early inhabitants, allowing this lore to live again.

Nicknamed “Science” as a kid, Coppola unites his love and curiosity for science, technology and engineering at the Domaine de Broglie. Drawing inspiration from the French Nobel Prize-winning physicist Louis de Broglie and his noble family, the winery is located in Oregon’s renowned Dundee Hills and overlooks the Willamette Valley, where one of the first Pommard clones was planted to produce world-class pinot noir. Inside, the relaxed space includes a curated collection of artifacts honoring the familym ‘Maison de Broglie,’ and a themed tasting room – with a selection of Pinot Noir, of course – which features memorabilia from Is Paris Burning?, the 1966 French-American film that Coppola co-wrote with Gore Vidal about the 1944 Paris liberation.

To discover more about The Family Coppola visit thefamilycoppola.com/en/wine.