A Prison for Cats and Dogs has Opened in the USA, But It's Not What You Think 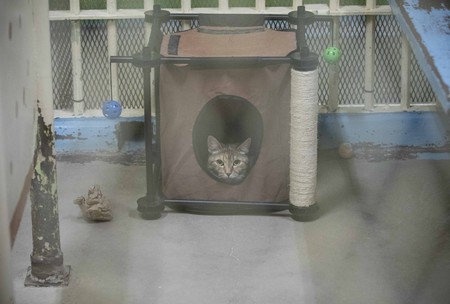 A prison which once housed dangerous murders, rapists, and drug dealers now has a new type of inmate – adorable rescued cats and dogs.

The ‘prison for cats and dogs’ is home to nearly 100 of the animals who have been sent there after being rescued from the streets, abusive owners and other cruel environments. Criminals serving jail terms were booted out of the prison and moved to another one, to make way for the animals, who have their own cell – just like the previous occupants.

The pets living at Maricopa Animal Safe Haven (MASH) in downtown Phoenix, Arizona, USA, are cared for by non-violent female criminals serving sentences at a nearby facility. One of the dogs at the prison-turned-shelter – a shepherd-cross called Wiley – works once a week at another prison, helping with animal obedience lessons for convicts.

Tragically, many of the dogs at the unit, like five-year-old Wiley, were the victims of horrific sexual abuses at the hands of their owners.

The MASH facility was once the maximum security ‘4th Avenue Jail’ and is the brainchild of former Maricopa County Sheriff Joe Arpaio, nicknamed ‘America’s meanest lawman,’ for his infamously tough methods. 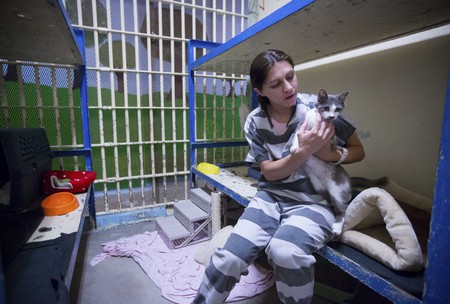 As well as cats and dogs, the prison houses other household pets – and once even had a zebra. Sheriff Arpaio, 84, said: ‘People used to say I was the meanest lawman in American. But whatever they said about me, they could support what I did for the animals. People may not like me but they would come up to me and say, “I hate you, but I love what you do for the animals”.’

‘Someone was going around killing cats and drinking their blood. No one was really doing much about it. We formed the unit and solved the cat killings but then realised there was a bigger problem. At that time there wasn’t even a law against bestiality in Arizona, we needed a major crackdown.’

‘The animals were the victims, I needed an air-conditioned place to put them in and the jail was all we had. We kicked out all the inmates and put animals in every cell.’

Female inmates from a nearby prison are carefully selected to care for the animals. Valerie Stockton, a senior civilian staff member at MASH who previously worked at a big cat sanctuary, said: ‘We don’t have anyone here with convictions for violence.

‘Most of the inmates here are here for non-violent crimes involving drugs or sometimes prostitution.You see the change in them, when they first get here they have their head down. You have to remember that many of them share a similar background to the animals – a history of abuse, of not being cared for.

‘When they are given a chance to care for an animal, to show some compassion you see something change psychologically in them.’ 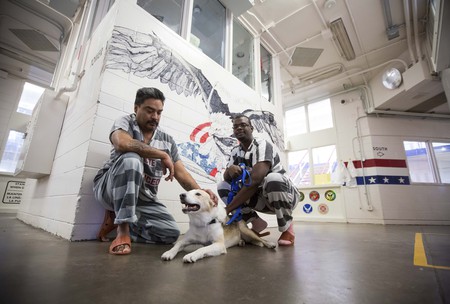 Sergeant Isabel Garcia, of the sheriff’s department, added: ‘Animals don’t judge them. They don’t see prison stripes, they see someone who brings them food and who cares for them.

‘We tell the girls here, “these are your mistakes, and these are some of the tools we can give you to correct it so that when you are released you can be become a better citizen rather than seeing this place as a revolving door”.’

The animals at the shelter are shown to potential new owners before they are re-homed, and some pets have been there for as long as seven years. 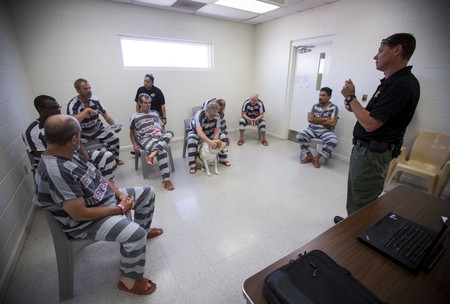 Each week Wiley visits Towers Prison and helps teach former military personnel who are now serving jail terms. He helps Officer William Sibel teach them how to control animals and get them to become obedient. 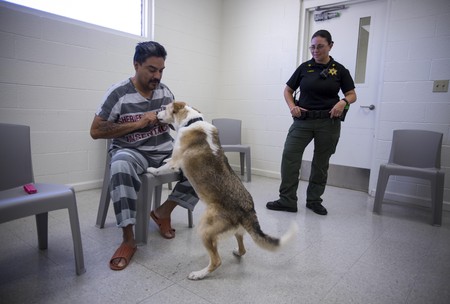 Sgt Garcia said of Wiley: ‘Wiley is a bestiality case. He’s been with us for a year.

‘He’s a lot better than when he came in but we still have to be careful when handling him. If you touch his lower body, he becomes aggressive.’ 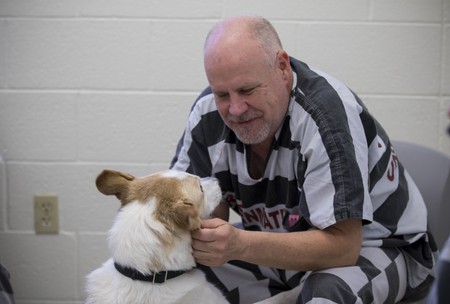