A Coffee Tour Of The Pacific Northwest 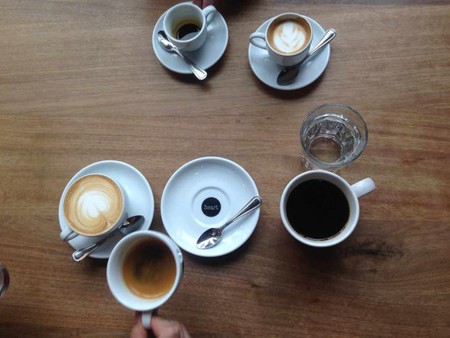 In the early 20th century D.T. Suzuki wrote that while drinking his morning tea, he was ‘swallowing the whole universe with it.’ David Byrne responded in 2012 with, ‘That’s a lot for a cup of tea.’ Thanks, David. The Zen maxim might seem hyperbolic to Mr. Byrne, and rightly so if we allow Mr. Suzuki his Philocamellianism, but not if we make a simple and deft word swap and exchange Mr. Suzuki’s beloved tea for the true elixir of ‘eternity itself transcending time and space’: coffee. There is a universe of possible coffee trips in the blossoming contemporary coffee scene.

Portland might be the heart of America’s erupting coffee scene. Birthplace of the exquisite Coava Roasters (discussed next) and home of the behemoth that is Stumptown (whose tangy Colombia Los Picos I presently sip) along with a dazzlingly infinite coffee underbelly of throwdowns and home roasters, Portland is to many a caffeine epicenter.

In this paradise of coffee, however, one place stands out: Heart. I know I’ve docked at sympathetic lands when I enter any coffee shop that proudly displays their crisp white bags of Heart beans. It has become a sign of knowing; ‘Look, we have Heart,’ the shops whisper. Their white bags with cute colored dots are a mainstay of serious coffee shops in America.

The downtown shop, one of two, pulls no punches with its severe, surreal Bauhaus exterior that resembles a sinister Duchamp-Villon. It’s interior is pretty and naturally well-lit, with big wood tables and white walls. They have a water spigot, and coffee shops with water spigots are rarer than they should be. Dante writes of ‘the love impell’d’ at the end of his Paradiso, the love ‘that moves the sun in heav’n and all the stars.’ This might be a suggested inscription of this otherworldly place. I ordered an espresso, a cappuccino, a macchiato and two cups, all of which were divine. 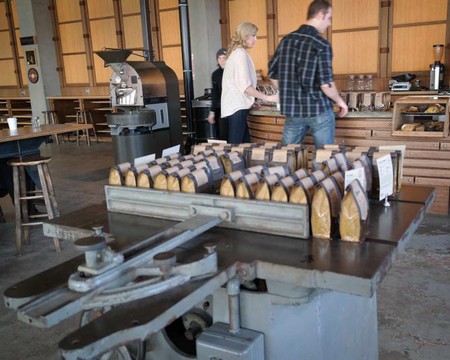 Having recovered from the spiritual experience of Heart, I blindingly made my way to Coava’s delightfully sylvan tasting bar in central Portland. The tall ceilings and immaculately crafted woodwork provide an ideal coffee-sipping venue, and the staff is chipper and very friendly. I came with a couple of friends and we had an extremely pleasant time admiring wooden pots and plates lovingly crafted by Bamboo Revolution while we sipped the panacea to our weariness: again, you guessed it, coffee. This time a great V60 Ethiopian Maeza.

The space is a delightful marriage of crafts. Artisan on artisan. Like an Artisinal Island of Lesbos, and I’m okay with that. Others have suggested it might be an Island of Circe, and to that I say there are worse places to be stranded. 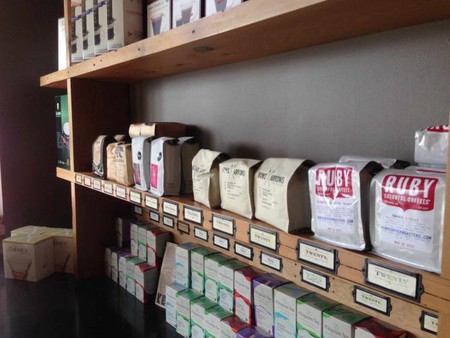 Milstead & Co is located nearly underneath a bridge near the waterfront in Seattle‘s neat Fremont neighborhood. The shop is adorable and boasts a gorgeous and enormous outdoor patio, tons of interior seating, and outlets galore. All pour-overs are accomplished by Aeropress, which probably does not satisfy a strict definition of pour over. My Four Barrel Ethiopian was sweet and bright, with hints of Orange zest and honeyblossom.

I was fortunate enough to meet here with the darling poet Amaranth Borsuk, Assistant Professor at University of Washington’s Creative Writing and Poetics program, and we discussed potential futures, erasure poems and algorithmically-generated madness. Maybe it was the coffee talking or maybe it was just the cabin-fever induced by days upon days of rain and rain and rain; in any case, an escape from the Horror of Whiteness that Seattle’s sky eventually becomes to the sensitive eye is always welcome. Milstead & Co. offers a lovely venue for such a diversion. 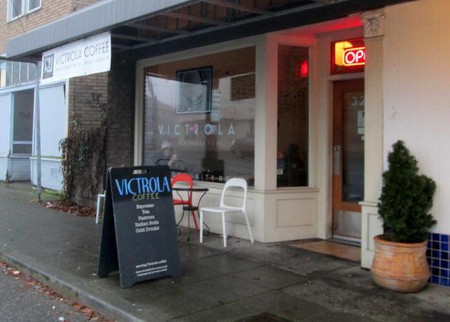 I arrived to Victrola late one evening just before closing time. Wide glass windows, a good space with a big central wooden communal table that is a halved tree stump and a window-seated bar all create a calm and comfortable atmosphere for that necessary 8pm shot. The barista was happy to help, even though when we entered the shop he was cleaning the equipment and wiping the counters with a gait that suggested his forthcoming freedom. Located near the heart of Downtown Seattle and not far from Pike’s Market, Victrola is a Seattle stalwart and worth a visit. 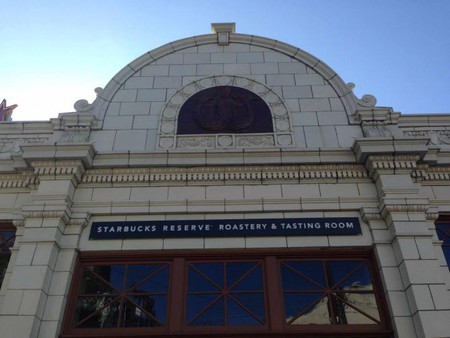 A strange and eerie place like a trip to Tutankhamen. Also gorgeous, and hauntingly so. This is a palace for coffee: the Taj Mahal to Coffea, a bunker to the present Reich of Espresso, the Hanging Gardens of Third Wave. This is not exactly a good thing – as problematic as architectural expressions of power can be.

There is a roaster that sends fresh beans to the brew bar through vacuum tubes. This is cool. It is also indicative of the misguided way that Starbucks approaches coffee. Form over function, if you will. Freshly roasted coffee is understood to not taste good. Most roasters suggest 2-3 days for beans to settle before being brewed. But one beautiful thing about Starbucks is that they play by their own rules, rules that seem to have nothing to do with taste or reality whatsoever.

I meet with Howard Shultz, founder and owner of Starbucks, by accident. I am introduced by a lovely hospitality manager and Mr. Shultz and I exchange niceties. When I query him which of his coffees I should drink he curtly directs my gaze to the lower level where the ‘slow bar’ is located. ‘They will tell you,’ he says. I thank the man kindly and stumble away in wonder. I walk down the hand wrought steps, the finely manicured hand rails, the pounded bronze everything that glints around me like silos in the moonlight. There is a library with books like Moby Dick and a glass-encased table where business men sit and discuss things.

I’m enamored and afraid. The hospitality manager comps $30 worth of mediocre siphon brew. No one knows ratios, temperatures, tasting notes, grind size or any detailed explanation of brew methods, but I am assured that the coffee is delicious and that the automated systems of the slow bar (which executes coffee by the pressing of a few buttons) is delightful. It is not.

Service is impeccable, warm, and friendly. There are several fireplaces and a lot of equipment to buy if you’re looking to drop $1,000 on coffee equipment. They have the correct information, but there is some kind of cosmic dissonance between Starbucks and reality, a dissonance well outside the scope of this article. It is Bible-length.

The space’s detail and craft is astonishing. It could be the photographic example of our contemporary ‘artisinal’ food and drink scene, and they know it. It is fabricated to be so. Baudrillard would have a field day with this one. This is not Disneyland or Willy Wonka’s factory; it is Slugworth’s. Let’s just say it isn’t about the candy here. Get in, look around, be amazed, be afraid, but remember: mortals are not allowed in the presence of God. Stare too long and you will be blinded. Leave accordingly. 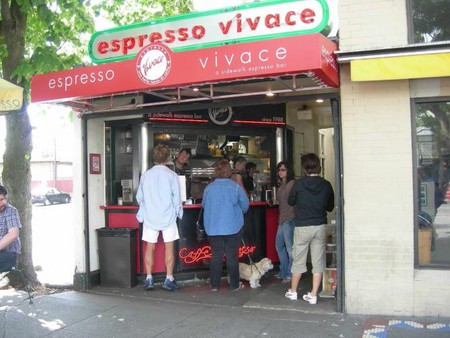 Vivace has a couple locations in Seattle and I swooped by the mere sidewalk cafe iteration on my way in from the rain. Sidewalk cafes are as old as coffee itself, and it’s nice to see them being embraced by the upper crust of the coffee community. Blue Bottle, for example, has created a serious sidewalk cafe in Venice, CA: glass, light wood, white stone and blue lights. But Espresso Vivace aspires to nothing so opulent and self-indulgent; it is classic Seattle coffee. It isn’t touched by the sweeping glamor of the Starbucks-esque Titans of Third Wave. It isn’t flaunting design know-how or special plates. It is a service bar, meant simply to fill you with warmth and send you on your way. It is simply nice and refreshing to pop in for an espresso and pop out of a place that has no frills and no pretense.

The two baristas were friendly and jocular and they made my macchiato with deference and aplomb. Certain coffee spaces are destinations themselves: Starbucks Reserve, Coava, Sightglass, while others simply serve their function. Espresso Vivace does coffee for coffee. Drink and be on your way, cloaked in the warmness of coffee while you cower under another spectacularly whited-out Seattle afternoon. At least you are full of caffeine.