A New Perspective: 6 World Cities From Above

Travelling is all about exploring a place in depth. However, greater surprises may come from observing the city from up high. We endeavour to give you a different perspective with our take on the best world cities as seen from beautiful, high viewpoints, offering unrivalled vistas and the opportunity to take in the magnificent size and buzzing atmosphere of the world’s most cosmopolitan venues.

No one would deny that the Empire State Building and Top of the Rock are the go-to places for a bird’s-eye view of the Big Apple, even though the queuing alone can cost you a couple of hours.

The iconic Empire State Building, being the third tallest building in the city, offers a magnificent view of the streets below as well as the New York Bay.

From above, Central Park looks like a giant green rectangle amidst a sea of beige blocks. Also in sight are the classic pieces of architecture, such as the silver-crowned Chrysler Building, triangular Flatiron Building and numerous copper-green rooftops.

Top of the Rock, with a similar height and location, offers visitors similar views with a relatively cheaper admission fee. It is also far less crowded and, most importantly, ensures tourists leave with the iconic Empire Building in their photos. 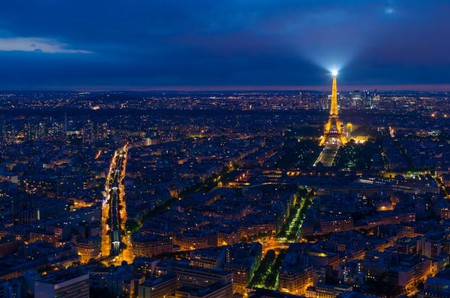 Paris never lacks places in which to enjoy the city from above -the Eiffel Tower, Arc de Triomphe, Notre-Dame Cathedral, Tour Montparnasse, Centre Pompidou, Basilica of the Sacred Heart of Paris (commonly known as Sacré-Cœur), etc. You can literally observe the city from any angle you prefer.

Depending on your location, the views can differ greatly. Arc de Triomphe has a close-up view of the Champs Elysees, while the Eiffel Tower and Notre Dame allow visitors to survey the renowned river, La Seine.

The much loved Eiffel Tower can be spotted from most attractions due to its distinctive height. At night, it will be lit up in gold, sending out two light beams that sweep across the city. Every hour until 1 a.m., the Tower will also sparkle.

In the daytime, Hong Kong may look like a city packed with countless high-rising buildings. At night, however, ‘The Pearl of the Orient’ never fails to impress tourists from all over the world. The iridescent skyscrapers in Hong Kong Island, like Central Plaza, Bank of China Tower and HSBC Main Building, paint a spectacular night view. The latest addition, the International Commerce Centre (ICC), illuminates the Kowloon side with its light animation.

Every night at 8pm, more than 40 buildings along the harbour will participate in a light and sound show, A Symphony of Lights. Organised by the Hong Kong Tourism Board, it is the world’s largest permanent light and sound show according to the Guinness World Records.

Traditionally, observatories are located in Hong Kong Island, with the Victoria Peak being the most popular choice among tourists. Diners would go to View 62 (formerly R66), a rotating restaurant at Hopewell Centre that overlooks the harbour and other tall buildings below.

After ICC was built, Sky100, its 360-degree indoor observation deck on the 100th floor, became tourists’ new favourite destination for its full view of the Kowloon Peninsula, Victoria Harbour and Hong Kong Island. 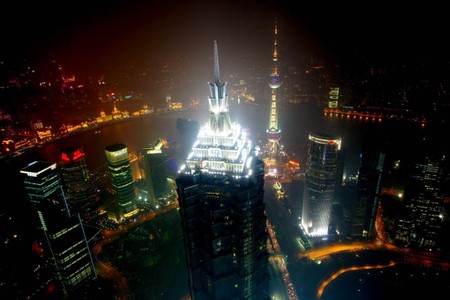 The beauty of Shanghai can be appreciated from either The Oriental Pearl Radio & TV Tower or Shanghai World Financial Center, both situated near the Huangpu River. Their locations allow tourists to see the modern Pudong area beneath as well as the historic Puxi area across the river.

The Bund at Puxi houses a rich collection of 52 structure, each having a unique history and architectural style. One can easily recognise the glowing green rooftop of the art deco Sasson House, the neoclassical HSBC Building, and the Big Ben-like Customs House from above.

At night, most buildings at the Bund are lit up in golden yellow, while those in Pudong gleam in vivid colours. Along with the reflections on the river, the Haungpu River transforms into a technicolour scene of yesterday and today. 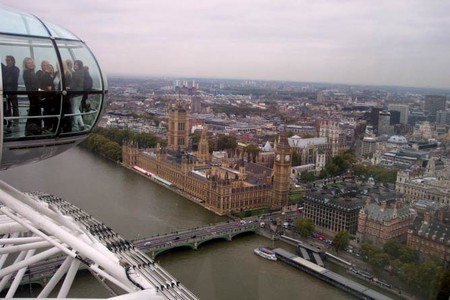 London has numerous observatories, with the London Eye being one of the best. Standing right next to the River Thames, the giant Ferris wheel gives riders an aerial view of the grand Houses of Parliament and Big Ben. Landmarks like Buckingham Palace and St. Paul’s Cathedral are also clearly visible. The capsules are made of glass, so riders can see the entirety of London on a clear day.

Other recommendations include St. Paul’s Cathedral and the Monument, which are popular historic attractions in themselves. By climbing up the hundreds of steps – besides testing your health conditions – tourists can experience how the people in the past overlooked the city.

For fear of collapsing during earthquakes, buildings in Tokyo are relatively short, which makes it harder to view the city from above – there are a limited number of observatories.

Besides the popular Tokyo Skytree and Tokyo Tower, tourists can also mount the Metropolitan Government Building and Bunkyo Civic Center for a panoramic view of the city. Until 2006, the former was the tallest building in the city and is still frequently featured in Japanese science fictions as a symbol of authority.

Admission to the observation decks is free-of-charge and visitors can see the Tokyo Skytree, Tokyo Tower and Tokyo Gate Bridge from the building. If the weather is good enough, they can also catch a sight of Mount Fuji glowing at sunset from afar.