The Mythical Terrain and Famous Film Locations of Monument Valley 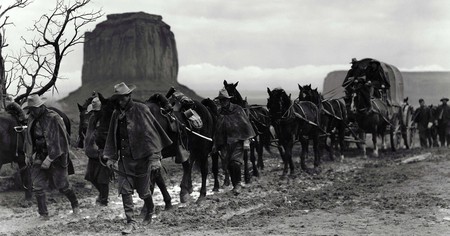 Monument Valley, which straddles the states of Utah and Arizona, became the pre-eminent icon of the American West thanks to trader Harry Goulding and film director John Ford.

Few filmmakers are more strongly affiliated with a specific place than John Ford is with Monument Valley. The legendary Irish-American director turned the valley’s little-known landscape of towering red sandstone buttes and mesas into an amphitheater for the human struggle against implacable nature. Ford and his star John Wayne each claimed they discovered the area, which spans the border of northeast Arizona and southeast Utah. In fact, Monument Valley’s place in Hollywood history was secured by Harry Goulding, a Colorado-born sheep rancher-turned-trader to the valley’s Navajo population. 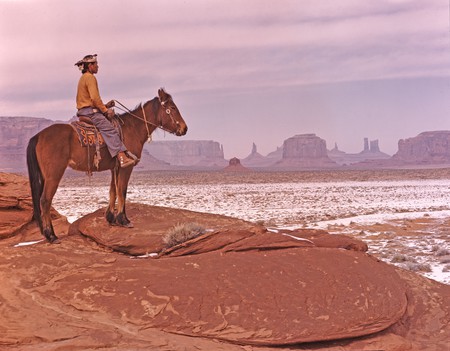 A touch of winter in Monument Valley, Arizona. The colorful Navajo American on his shaggy pony is part of the spectacular desertscape that erupts in great red rock formations, his tribal home for hundreds of years. (photographer's caption) | © Northern Arizona University, Cline Library [Josef Muench Collection]

Goulding first visited the valley with a friend in 1921. In Samuel Moon’s oral biography Tall Sheep (1992), he recalls looking over a clifftop: “And here, out on the valley floor were these big long sunset shadows from those monuments pointing at us. Well, we both just stopped right there and set on our horses, it seemed like 15 minutes or more, and never said a word.”

In 1923, Goulding and his wife Leone (nicknamed ‘Mike’) claimed 640 acres of land at the base of Big Rock Door Mesa. Initially living out of tents, they began running sheep stock and trading food, wagons and tools for the Navajos’ blankets, wool and hides. Between 1927 and 1928, two trappers helped them build the Monument Valley Trading Post, which later became a lodge. In 1937, the Gouldings bought the land they had claimed for $320.

The valley’s sparse economy was ravaged during the Depression, especially after John Collier, commissioner of Indian affairs in President Franklin D Roosevelt’s government, ordered a drastic livestock reduction programme on the overgrazed Navajo range. The programme, writes Thomas J Harvey, author of Rainbow Bridge to Monument Valley: Making the Modern Old West (2011), “undermined the Navajo subsistence economy, helping to transform it from one of dependence on crops and livestock to wage labour and welfare”. Goulding saw an opportunity to boost tourism and simultaneously help the Navajo: the story goes that he headed to Los Angeles to attract Hollywood – and Hollywood jobs – to the valley. 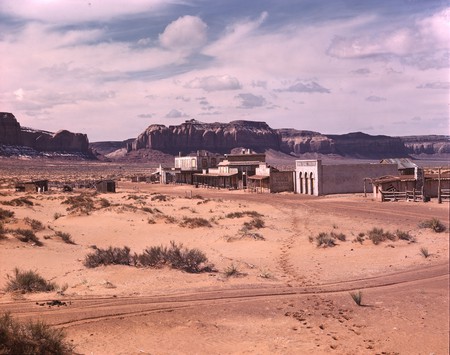 Movie set in Monument Valley. At the stateline of Arizona and Utah, this set represents the old mining town of Tombstone and was erected for the filming of My Darling Clementine by Twentieth Century Fox. The great red sandstone formations, for which the valley is well known, formed a natural backdrop. (Photographer's caption) | © Northern Arizona University, Cline Library [Josef Muench Collection]

Ronnie Baird has been general manager of the former trading post, now the Goulding’s Lodge motel, for 32 years. He befriended Mike Goulding in the late 1980s, when she lived as a widow in Monument Valley. She told Baird the story of how her husband drove them to Hollywood in 1938 having heard “on the grapevine” that a movie company was looking for a location in which to shoot “this Indian picture”. They reportedly travelled with their $80 savings and photographs of the valley, some taken by professional photographer Josef Muench.

According to both Mike and Harry, a receptionist at the United Artists studio told Goulding that he couldn’t have an appointment because he knew no one there. Unfazed, Goulding got his bedroll and declared that he intended to stay in the reception area until someone would talk to him. An angry studio employee – John Ford’s location manager – came to order Goulding from the premises, but when he saw the photos, he took the trader upstairs to meet Ford, who decided on the spot to shoot Stagecoach (1939) in the valley. 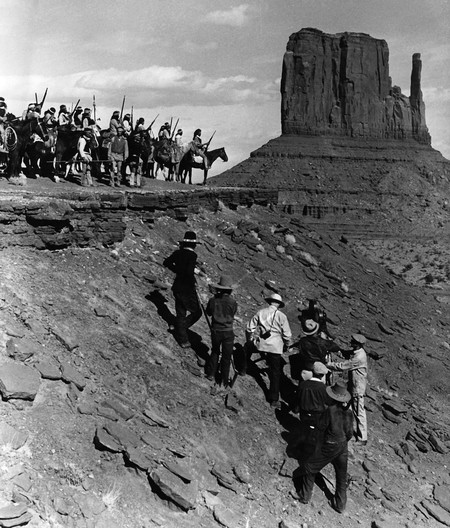 Harvey is somewhat unconvinced by this amazing tale, writing: “Stagecoach production documents show that Goulding approached the movie industry through the Wetherills of Kayenta, Arizona”. Trader John Wetherill had taken western writer Zane Grey to Monument Valley in 1913, and director George B Seitz had already filmed Grey’s novel The Vanishing American there in 1925, so the area wasn’t unknown to Hollywood at the time the Gouldings made their trip.

But Goulding’s intervention and Ford’s arrival would have a more lasting impact on the valley and its people. “When Ford came to Monument Valley, he saw the state of the area,” Baird says. “There was no economy here. People lived off the sheep they raised and the gardens they grew, but there was no money. Ford insisted that the studio pay the local people he hired as extras and set builders the same union wages they would have made if they were in Hollywood.” 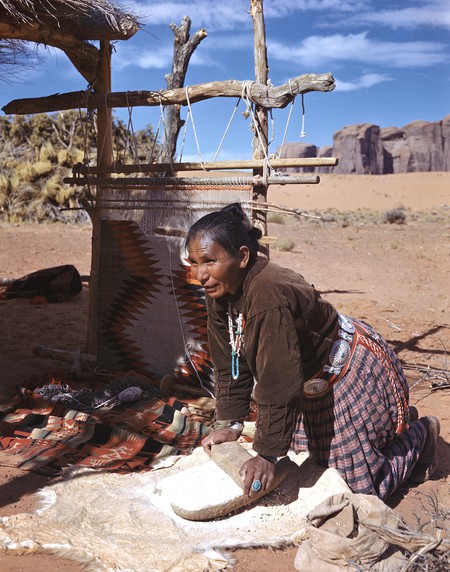 He played fast and loose with geographical facts, relocating the town of Tombstone – in reality 500 miles to the south, on the Mexico border – to the valley for his retelling of lawman Wyatt Earp’s story in My Darling Clementine. She Wore a Yellow Ribbon is set in the Northern Great Plains; The Searchers opens with the title: “Texas, 1868”. Cheyenne Autumn traces the Northern Cheyenne’s exodus from their Oklahoma reservation to their ancestral land on the Plains. Whenever Ford needed Apaches, Arapahos, Cheyennes, Kiowas or Comanches, he cast the valley’s Navajos. 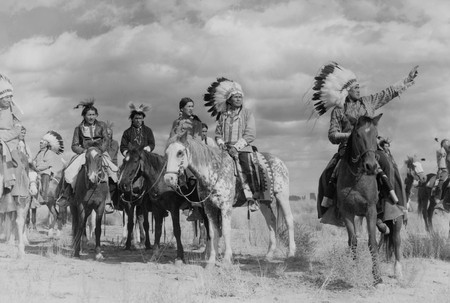 Over time, Ford’s lyrical vision of the valley became the dominant image of the American West. It is where, in Stagecoach, the coach and its cavalry escort are rendered minuscule by the titanic East Mitten and Merrick buttes. When She Wore a Yellow Ribbon’s ageing Captain Brittles (John Wayne) visits his wife’s grave, those same buttes loom up behind him in the rosy sunset; Tyree (Ben Johnson), Brittles’ trusty sergeant, half-circles one of the buttes and escapes a Cheyenne war party by leaping his horse across a ravine.

At the start of The Searchers, Ford’s masterpiece, the homesteader Martha Edwards (Dorothy Jordan) watches her brother-in-law Ethan’s (Wayne) lonely return from the American Civil War, hauntingly framed between Gray Whiskers and Mitchell buttes. Ford so indelibly depicted the valley that the shelf of rock from which Ethan lowers his fellow searcher Martin Pawley (Jeffrey Hunter) – as they attempt to rescue Ethan’s niece Debbie Edwards (Natalie Wood) from Comanches – was named John Ford Point. 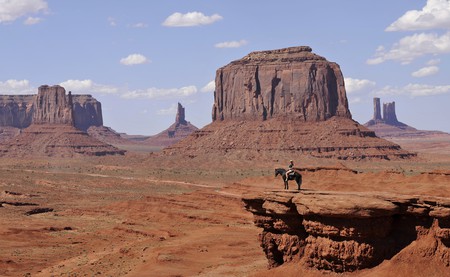 Pippa Scott was 19 when Ford cast her in The Searchers as Lucy, Debbie’s ill-fated sister. “We flew into Monument Valley so you could see the unstinting beauty of the whole place,” she recalls. She stayed at Goulding’s Lodge during the summer 1955 shoot. “All the ladies were sequestered there and we could look out over the valley. The company and crew had tents down there and they’d have lots of fun every night with fires and gambling going on.

“During the day, we would see in the distance the Navajo people herding their sheep or just walking across the valley in the most wonderful velvets.

I thought, ‘God, that must be so hot for them,’ but they said that it shielded them from the sun. And they loved ‘Pappy’ Ford and wanted to do whatever they could for him.”

Ford’s depiction of the valley owes much to the cinematographer Winton C Hoch. It was Hoch who captured the forked lightning that rends the sky above a cavalry troop walking across the valley floor in She Wore a Yellow Ribbon, Ford’s first color western. 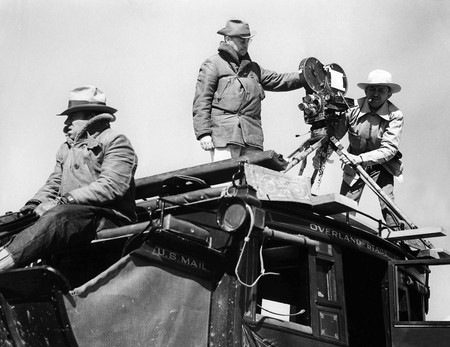 Hoch also photographed The Searchers, which makes expansive use of the valley’s menacing topography and the vast azure firmament that crowns it. “The huge skies above Monument Valley suggest a kind of eternity,” says Peter Cowie, author of John Ford and the American West (2004), “a kind of opening to… not heaven, perhaps, but to something we don’t quite understand, which we know doesn’t end.”

Cowie notes how the valley’s immensity creates a sense of foreshortened space – “You look up the road at a building and you think it’s about 400 yards away whereas it’s about two miles” – and marvels at the rich hues of the rocks. “There’s the extraordinary colour of this iron bauxite, this sort of pinkish-red,” he writes. “I think that Ford, once he could use colour, really loved the vermilion and amber shades, and he was lucky to have in Winton Hoch a great cameraman who could bring that out. You can see through Ford’s use of colours how he was influenced by the western paintings of Frederic Remington and Charles M Russell.”

Ford would have scorned anyone who suggested he showed an awareness of Monument Valley’s metaphysical properties, but “he certainly saw that it had a spiritual value,” says Glenn Frankel, author of The Searchers: The Making of an American Legend (2013). “Take The Searchers, in which Ford is constantly toggling between these little ranch houses – rather dark inside, where people are living their lives and where all their anxieties and fears are expressed – and this vast, obliterating landscape. 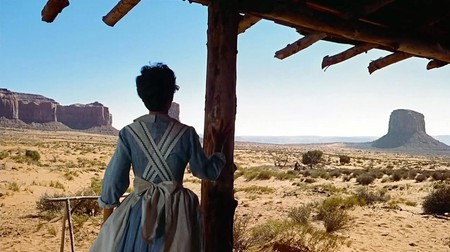 “Martha Edwards opens the door at the start of the film and what do we see? We see this enormous vista where this lone rider is so small. Ford’s genius, in part, is being able to take us into both worlds and give us the ultimate visual-emotional experience; one without the other would not be as effective. Ford shows us that we live the whole wonderful drama of our lives, yet at the same time we’re part of this vast universe in which our lives are very tiny and very temporary.”

The valley became a Navajo tribal park in 1958. “The biggest change I’ve seen,” says Baird, “is that the Navajo nation allows families to live in Monument Valley, and adds more homes for the locals to live in. And the amount of tourism we’re seeing is much higher than 32 years ago.” More than 400,000 tourists visit the valley annually, sustaining – Baird estimates – about 800 jobs, many of them at Goulding’s Lodge and the Navajo-run View Hotel, which opened in 2008.

“Individual Navajo entrepreneurs have jewelry shops, tour companies and horseback rides,” Baird says. “Visitors on a tight budget will drive the 17-mile loop of the valley on their own, but most people like to go on a guided tour. All the guides at Goulding’s are Navajos, so tourists not only get the wonderful views and the spirituality of Monument Valley, they also get insight into the Navajos’ culture.”

The majestic East and West Mitten buttes – named for their resemblance to the garment – and Merrick Butte are the most popular sights in the valley, along with the fragile-looking Totem Pole obelisk, Baird says. “Those rocks – they don’t change much.” 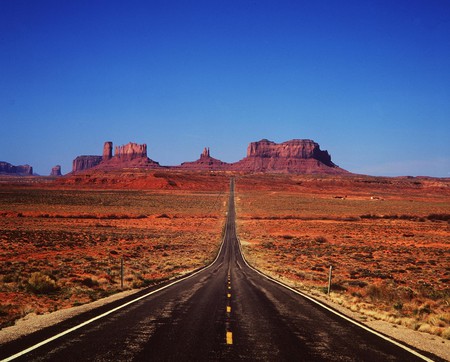