A Brief History Of The Roosevelt Dam 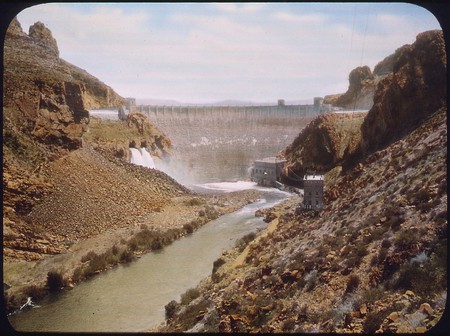 The Theodore Roosevelt Dam, once the world’s tallest masonry dam, was constructed northeast of Phoenix, Arizona to prevent flooding and control the raging waters of the Salt River, provide water for irrigation, and generate hydroelectric power. Often called the ‘Salt River Project,’ the Roosevelt Dam helped to turn the desert of Arizona into fertile land that could be used for farming, and aid in the settlement of the then-barren west.

The Roosevelt Dam was built between 1906 and 1911 in a narrow gorge below the Salt River and Tonto Creek, once referred to as ‘The Crossing’ by Arizona pioneers. It was one of five major projects under the Newlands Reclamation Act (1902) – a federal program that would commission, design, and construct large-scale irrigation projects in arid lands that needed water. Roosevelt, who helped to get the act approved, believed that water in western rivers was being wasted if not used for settling and farming. Inspired by Greek and Roman styles of building, the Roosevelt Dam was built using large, irregular-shaped blocks placed in a cyclopean-fashion and cost a whopping $10 million to complete; at 280 feet tall, the dam was the largest masonry dam in the world. The dam also formed the largest artificial reservoir in the world, Theodore Roosevelt Lake, which contained 526,875 acre-feet of water. On March 18, 1911, President Theodore Roosevelt dedicated the dam in his honor. 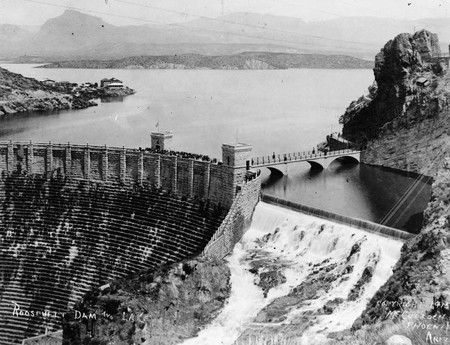 From 1989-1996, the dam overwent a $430 million concrete renovation, expanding by 450,000 cubic feet to its current height of 357 feet, and increasing the storage capacity of the lake to 1,000,000 acre-feet of water; however, due to drought, the new water capacity wasn’t reached until February 2009. The renovation also included 6.7 million pounds of steel reinforcement, renovations to the power plant, ‘Lake Tap’ tunneling contracts, and the new Theodore Roosevelt Bridge, built upstream to take traffic off the top of the dam. The bridge, costing $21.3 million, received recognition by the American Consulting Engineers Council as one of the top 12 bridges in America (1995), and was the longest two-way, steel-arch bridge in North America, spanning 1,080 feet across the lake; today, modern vehicles are too wide for two-way traffic. 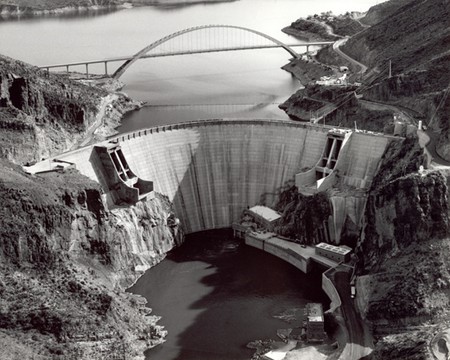 Roosevelt Dam in 1996 after renovations were completed | © Public Domain/Wikicommons

The Theodore Roosevelt Dam was named a National Historic Landmark in 1963; however, after being completely encased in concrete during the renovations in the 1990s, it no longer contained the same masonry work as when it was first listed and was withdrawn from the list on March 10, 1999.