A Brief History Of The Hoover Dam

Hoover Dam 2011 panoramic view from the Arizona side | © Kuczora/WikiCommons

On September 30, 1935, Hoover Dam, originally named the Boulder Dam, was dedicated by President Franklin Roosevelt. Surrounded by a crowd of 10,000 people, the massive concrete dam, stretching 1,244 feet across the Black Canyon, sat on the Arizona–Nevada border as the largest dam in the world at the time of its completion. The dam, which took five years to construct, was part of a plan to control and manage the waters of the Colorado River while also providing water and hydroelectric power to the surrounding areas of the Southwest United States. 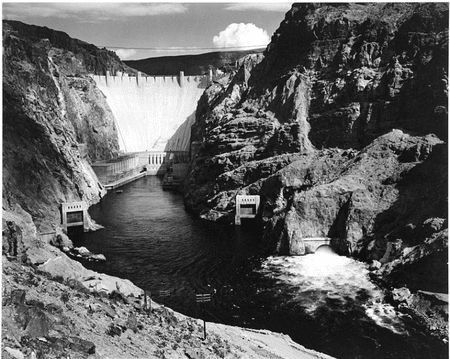 Photograph of the Hoover Dam (formerly Boulder Dam) from Across the Colorado River; From the series Ansel Adams Photographs of National Parks and Monuments, compiled 1941 - 1942, documenting the period ca. 1933 - 1942 | © Public Domain/Wikicommons

At the beginning of the 20th century, farmers tried to divert the waters of the Colorado River to the towns of the Southwest using man-made canals; however, in 1905, the rapid waters of the river broke through the canals, which led to the formation of the landlocked Salton Sea. The U.S. Bureau of Reclamation was called in for action, and by 1922, plans for the massive Hoover Dam, named the Boulder Canyon Project, were set in place – the dam would be used to control flooding, irrigation, and generate hydroelectric power. Congress hoped the sale of this water-generated power would help make up for the $165 million cost of the dam. Some lawmakers were concerned about the price and were worried that the water wouldn’t be divided equally among neighboring states – legal wrangling continued despite Herbert Hoover‘s 1922 Colorado River Compact, a plan that would distribute the water equally between the seven states. President Calvin Coolidge finally approved the project in December of 1928 and decided that the dam would be dedicated to Hoover and his contributions (although, the name wouldn’t become official until 1947). 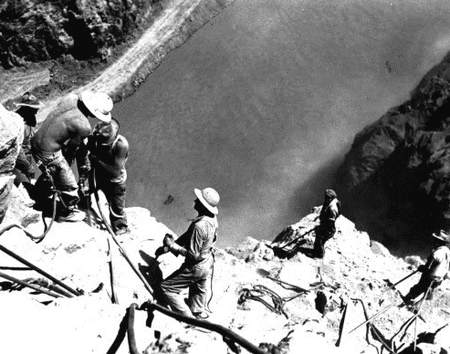 The project, designed by architect Gordon Kaufmann, was awarded in 1931 to a group of construction companies named Six Companies, and thousands of workers funneled in to complete the challenging project – construction of the 60-story arch dam began shortly after. The first stage involved blasting the walls of the canyons to create temporary tunnels that would help to divert the Colorado River to allow for the rest of the construction to be completed. Due to the strict timeframe, workers suffered from horrible work conditions in the tunnels as the heat and carbon monoxide-filled air became unbearable, leading to a strike in August of 1931. Despite these minor setbacks, a temporary cofferdam was completed in November of 1932 using the rock that fell from the blasted canyon walls. Workers then started on the clearing of the blasted walls, which cost the lives of over 100 men as workers hung from suspended heights of 800 feet above ground – some fell to their death or were injured by the falling rock and dangerous equipment. 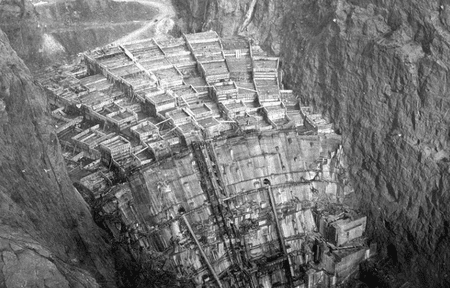 Construction on the dam’s massive structure, the futuristic-looking power plant, and the four intake towers was initiated next – buckets of concrete were carried across the canyon via cableways as workers sprayed the drying concrete blocks to keep them moist. Six-hundred miles of pipe loops were also embedded within the concrete blocks to help circulate water through the dam to keep the concrete cool. As the dam rose in height, piece by piece, it was finally completed in 1935 with a final height of 726 feet; on September 30th, the dam was commemorated by the President. 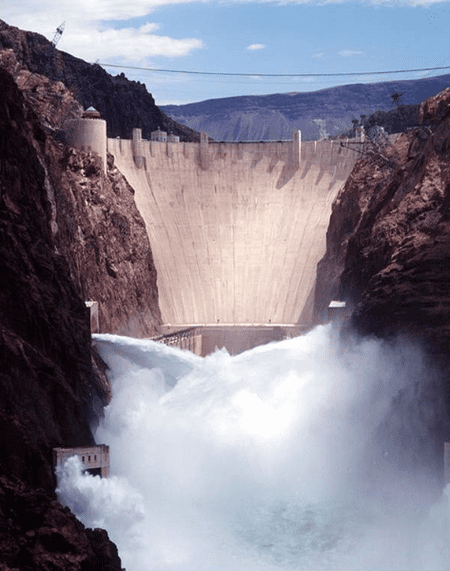 After five million barrels of cement, 45 million pounds of reinforcement steel, and 21,000 workers, the Hoover Dam was finally complete – this massive structure has gone down in history as a major influence in the development of the United States and some of its largest cities, including Las Vegas and Los Angeles. The dam, which has the ability to provide water to over two million acres of land and power to over 1.3 million homes, was designated a National Historic Landmark (1985) and one of America’s Seven Modern Civil Engineering Wonders (1994) – today, it receives over seven million visitors every year.