A Brief History Of The Hamburger 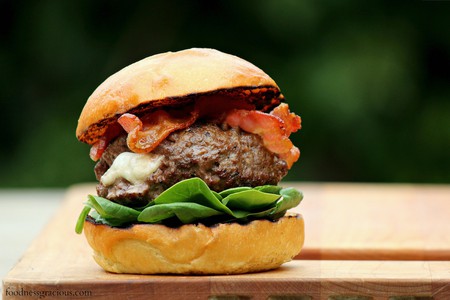 The hamburger, in some form or another, has appeared throughout history since the early 4th century. It survived through war, economic crises, and over a dozen centuries of time. Traveling from Europe across the Atlantic, the hamburger rose to fame in the US, emerging as an icon in the culinary world. While its story is long and tiresome – from Mongol horsemen to American county fairs – here’s how America’s favorite sandwich became what we know and love today.

Before the hamburger came to America, it was a popular culinary tradition in Europe. An ancient collection of recipes accredit the first minced meat preparation to the 4th century; other historians believe it was the Mongols that spread the tradition in the 13th century when warriors would stash raw meat under their saddles to soften it and cook it. It spread throughout the empire and across Europe, with Moscow adopting a raw version – known today as steak tartare – by the end of the century. Russians brought the recipe to the Germans in the 17th century, arriving via the port of Hamburg. By 1747, the Hamburg sausage appeared for the first time in a cookbook, The Art of Cookery, Made Plain and Easy, and in the early 1800s, the Hamburg steak was included in the Oxford English Dictionary.

In the 1840s, German immigrants fleeing political revolutions in their country left for the New World. The Hamburg steak is said to have been eaten on the ships before arriving in the US. By 1873, it appeared for the first time on a menu at Delmonico’s in New York City. A few short years later, Frank and Charles Menches from New York and Charlie Nagreen from Wisconsin – both claim to be its creators – served a version of the patty-on-a-bun at their respective local fairs. But whatever its genesis, the hamburger didn’t receive significant attention until it was featured by Louis’ Lunch at the St. Louis World’s Fair in 1904, known for introducing wild and new foods to Americans. After developing a special bun for the hamburger in 1916, Walter Anderson and Edgar Ingram opened White Castle, the world’s first burger chain, in Kansas in 1921. In 1928, the first burger ‘with cheese’ appeared on a menu at O’Dell’s Diner in Los Angeles, and in 1935, the word ‘cheeseburger’ was coined by Denver’s Humpty Dumpty Drive-In. 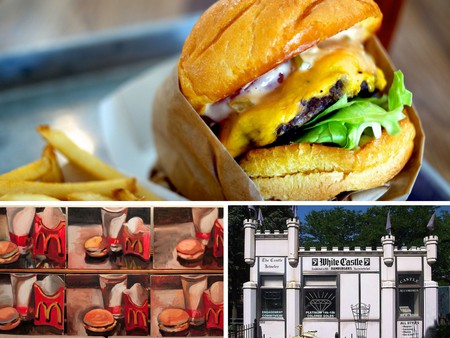 Cheese Burger at Gott's Roadside, Palo Alto | © Jun Seita/Flickr | In the 1960s, McDonald's advertised the ability of a customer to eat the same burger anywhere in the United States, and a few decades later it made the same feat possible in much of the world | © peter klashorst/WikiCommons | The 1936 White Castle Building No. 8 in Minneapolis, Minnesota | © McGhiever/WikiCommons

Just five years later, the iconic McDonald’s Bar-B-Que opened in San Bernardino, California; in 1948, brothers Richard and Maurice McDonald turned the focus to their 15-cent hamburger. That same year, In-N-Out launched the first drive-thru burger spot in Baldwin Park, California. Led by McDonald’s, American-style franchised fast food spread globally. Even restaurant chefs were following suit: in the 1950s, the first gourmet burger was featured at New York’s 21 Club. McDonald’s released its famous Big Mac in 1968, and Wendy debuted its memorable commercial featuring the slogan ‘Where’s the beef?’ By the 2000s, America had become a burger-obsessed nation: in 2001, burgers made up 71 percent of all beef served in commercial restaurants. Today, the US alone eats more than 40 billion burgers annually.