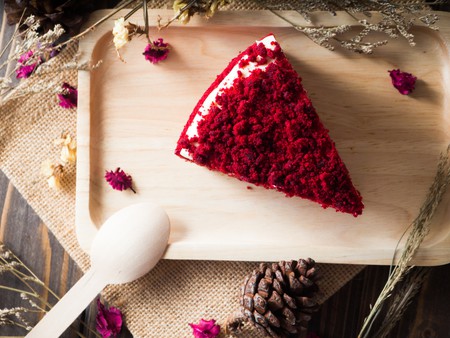 There is no better paradigm for America’s outrageous obsession with food-scented products. Red velvet candles, red velvet vodka, red velvet air fresheners – even red velvet protein powder can be found on the market. From marketing tactic to culinary sensation, here’s the legend behind the much-loved red velvet cake.

The first velvet cake was born in the 1800s, during a time when American cooks were perfecting their own cake recipes. Using almond flour, cocoa, or cornstarch to break down the protein in flour, a finer textured cake emerged – dubbed velvet cake – followed by sister cakes, the mahogany cake and devil’s food cake. Controversy over the color of the cake is still debated: some believe it’s caused by a chemical reaction between the cocoa and acid, while others blame the brown sugar, originally named red sugar. By the 1930s, devil’s food cake had appeared in newspapers in the Midwest and along the West Coast, referred to as ‘Christmas cake.’ Shortly after, the first modern red velvet cake was served at the Waldorf Astoria, appearing later at Eaton’s department store in Toronto. 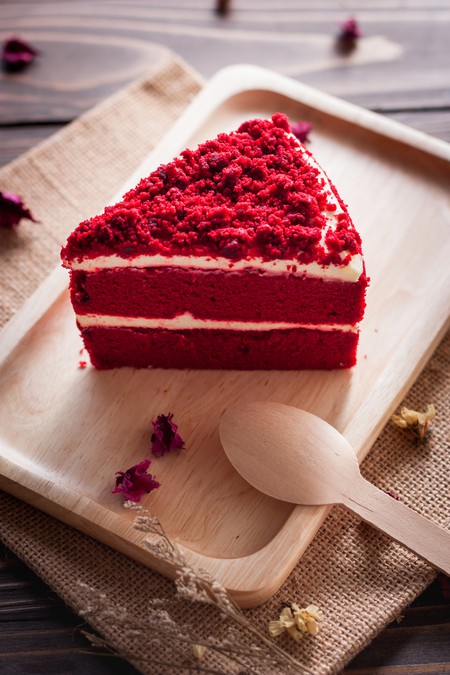 Meanwhile, in Austin, Texas, food-dye and extract salesman John A. Adams was getting rich. He and his wife Betty tasted the red velvet cake at the Waldorf, according to stories at Adams Extract Company. In 1938, the government passed the Food, Drug, and Cosmetic Act, enforcing regulations on food coloring. Adams decided that red velvet would be his train to success, and as an act of marketing prowess, the couple opted to sell more dyes and extracts. In the 1940s, they released a mahogany cake recipe that used red food coloring. The recipe was printed on cards and sold with vanilla, red dye, and artificial butter flavoring – a popular additive during World War II when butter was rationed. It included a recipe for icing, known as boiled-milk frosting, made with milk, flour, butter, and sugar. Red velvet became popular in Texan homes and Midwest state fairs, eventually spreading to the South where it is now a regular at Emancipation Day parties and Juneteenth celebrations – a gathering of red food items that symbolize the blood shed during slavery and the Civil War.

But red velvet wasn’t always popular with the culinary crowds. Irma S. Rombauer wrote in the 1943 edition of The Joy of Cooking: ‘Generally popular, but not with me, which is not to be taken as a criterion.’ James Beard claimed the cake as ‘bland and uninteresting,’ and red velvet struggled for a spotlight in popular cookbooks in the 1980s and early 1990s. But after appearing in the 1989 film Steel Magnolias, red velvet cake became a star. In 2000, Cake Man Raven in Brooklyn sold red velvet cakes to celebrities; in New York City, Magnolia Bakery’s red velvet cake was a top seller, eventually adding red velvet cupcakes to the menu. By 2005, red velvet was a staple at nearly every upscale bakery across the nation. In 2011, America’s love for red velvet reached its pinnacle, with red velvet fried chicken at American Cupcake in San Francisco; red velvet lattes at Dunkin’ Donuts; red velvet Pop-Tarts; and red velvet tea at the Republic of Tea. And if you can’t seem to leave the cake in the kitchen? There’s red velvet body mist, lotion, and lip balm, too.