A Brief History Of Pumpkin Pie 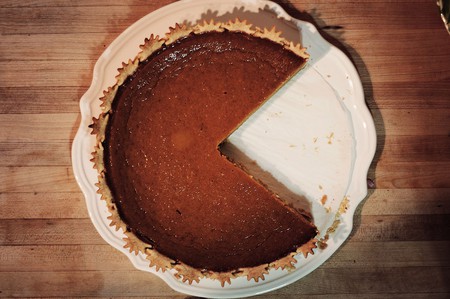 Pumpkin pie is the quintessential American Thanksgiving dessert. On a table ornamented with bowls of cranberry sauce, gravy, mashed potatoes, and a turkey, this annual gathering wouldn’t be complete without a slice of orange-tinged custard and flaky crust. Pumpkins, originally named ‘pumpions’ in England after the French ‘pompon,’ have long-standing roots: one of the earliest foods brought back from the New World by European explorers, the history of the pumpkin can be traced back to 5500 BC when it was first cultivated in Central America. But how did squash make its way into the dessert realm?

The first mention of pumpkin in Europe dates back to 1536 after European explorers returned from their overseas adventures. Within a few decades, ‘pumpions’ were regularly grown and used in recipes by the English. In a culture where pie-making had been around for centuries, it’s no wonder this round squash quickly made its way into pastries. By the time the Pilgrims set sail for present-day America in 1620, it’s likely many of the colonists knew about the round-shaped vegetable, as did the Wampanoag. A year later, a three-day harvest celebration was held between the colonists and Wampanoag – it is believed that pumpkin, which could be easily made into bread without flour or yeast, made it to the table.

By the 17th century, pumpkin pie was already appearing in cookbooks. A 1653 French cookbook contained a recipe with milk-boiled pumpkin that is strained and baked in a crust, while a 1670 recipe by English writer Hannah Woolley included a pie filled with layers of pumpkin, apple, rosemary, thyme, and marjoram. An early New England recipe called for a hallowed-out pumpkin to be filled with sweet, spiced milk and cooked over an open fire; a recipe in England included the same instructions, but it added apples. 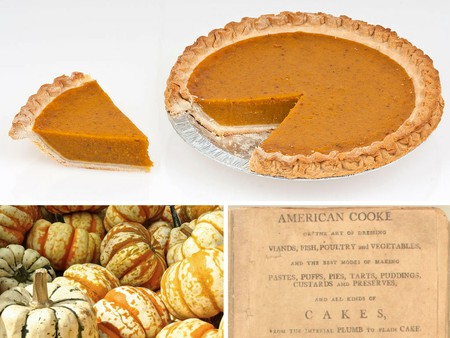 Over the course of the next two centuries, pumpkin pie and its fame grew with the rising popularity of Thanksgiving. But it wasn’t until the release of Amelia Simmons’ cookbook American Cookery (the first real ‘American’ cookbook) in 1796 that the pie became nationally recognized as an American Thanksgiving hallmark – the book contained two recipes for pumpkin pie, one of which closely resembles recipes widely used today. Legend has it that in the early 18th century, a small town in Connecticut postponed its Thanksgiving for a week because ‘there wasn’t enough molasses available to make pumpkin pie.’

Pumpkin pie even found its way into the workings of the Civil War. Many New England colonists already loved the pie, and so it comes as no surprise that it can be found in early American novels and poems. Abolitionist Sarah Josepha Hale (who also worked for years to establish Thanksgiving as a national holiday) mentioned pumpkin pie in her 1827 anti-slavery novel Northwood; abolitionist Lydia Maria Child wrote about it in her famous 1842 poem about a New England Thanksgiving, stating, ‘Hurra for the pumpkin pie!’ By the time Abraham Lincoln established Thanksgiving as a national holiday in 1863, Southerners were already in dispute, stating that ‘this is an annual custom of that people, heretofore celebrated with devout oblations to themselves of pumpkin pie and roast turkey.’

But this didn’t have an effect on the spread of Thanksgiving (and pumpkin pie) across the nation. Many women’s magazines featured recipes for pumpkin pie, and shortly after, Libby’s meat-canning company developed the first line of canned pumpkin – releasing it in 1929. Putting pumpkin pie on the table at Thanksgiving became that much easier, sealing its fate as an all-American tradition.