A Brief History Of Coca-Cola, America's Most Famous Export 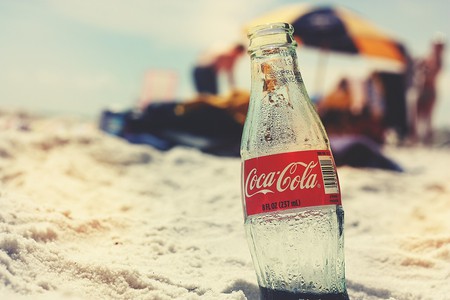 Coca-Cola is more than just a soft drink; this nineteenth-century-born soda has made its way from a small-time soda fountain to becoming America’s most iconic refreshment. Coca-Cola, or Coke as we all know it, has a long history: from its inception in 1886, Coca-Cola’s ever-changing story has passed through many decades, adapting to the times of the roaring 1920s, the disco era of the 1970s, and finally to technology-centered modern day. But despite the innumerable advertisement campaigns and slogans, Coca-Cola has held true to its origins of fun, happiness, and enjoying the simple pleasures in life.

In 1886, Dr. John S. Pemberton, a pharmacist from Atlanta, returned from the Civil War with hopes of inventing something that would bring him success. Because Pemberton’s previous experiments with medicines had been largely unsuccessful, he opted for a different angle; he decided to make his own soda fountain syrup. After stirring up his distinctly flavored, caramel-colored syrup, Pemberton headed to his neighborhood pharmacy, Jacob’s Pharmacy, where it was mixed with carbonated water. There, the drink was sampled by customers who agreed that it was something special. Jacob’s Pharmacy began selling the drink for five cents a glass; shortly after, it was named Coca-Cola by Pemberton’s partner, Frank Robinson, who also helped to develop the classic red-and-white script that is still used today. 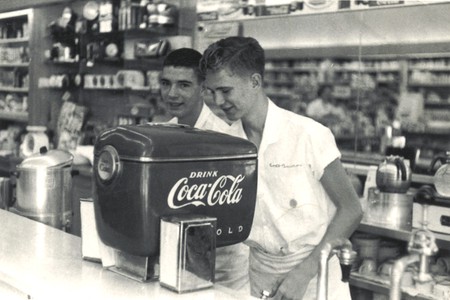 During the first year, Coca-Cola was not as successful as Pemberton had hoped; despite advertising campaigns in newspapers and coupons for free samples, only nine glasses of Coke were consumed each day. In 1888, just before his death, Pemberton sold Coca-Cola to Asa Chandler; Chandler, an avid businessman, expanded, selling Coca-Cola to cities outside Atlanta. In 1894, a Mississippi soda fountain owner was interested in making Coca-Cola portable, installing a bottling machine behind his soda fountain and bottling Coke for the very first time. In 1899, exclusive rights to bottle and sell Coca-Cola were sold to three men from Tennessee, and by 1916, over 1,000 plants were bottling Coke. This same year, the bottlers decided on a unique bottle design that would distinguish Coca-Cola from the competition and make it recognizable to consumers worldwide. This signature contoured bottle is still used today, and has served as inspiration for artists from all over the world, with many on exhibit at the World of Coca-Cola in Atlanta. 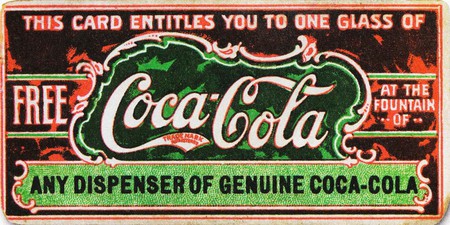 Believed to be the first coupon ever, this ticket for a free glass of Coca-Cola was first distributed in 1888 to help promote the drink | Public Domain/Wikicommons

Throughout Coca-Cola’s history, the brand has gone through numerous advertising campaigns and slogans, adapting with each era it has surpassed. In 1929, Coca-Cola advertised in the Saturday Evening Post with the slogan, ‘The Pause That Refreshes’, one of the most famous slogans in Coca-Cola history and still echoed in advertisements today. During the 1970s, Coca-Cola used commercials to promote ‘fun, friends, and good times’; in 1971, The Hilltop Singers performed ‘I’d Like to Buy the World a Coke‘, and in 1979, a famous commercial featured a Pittsburgh Steeler football player. In the 1980s, Coca-Cola used slogans like, ‘Coke is It!’, ‘Catch the Wave’, and ‘Can’t Beat the Feeling’, and in the 1990s, the company became known for the polar bear commercials with the slogan ‘Always Coca-Cola’. In the 2000s, Coca-Cola released their ‘Open Happiness’ campaign, which spread across the globe, taking inspiration from the famous 1920s slogan with the emphasis to ‘pause, refresh with a Coca-Cola, and continue to enjoy one of life’s simple pleasures’. Today, over 1.9 billion glasses of Coca-Cola are consumed annually. 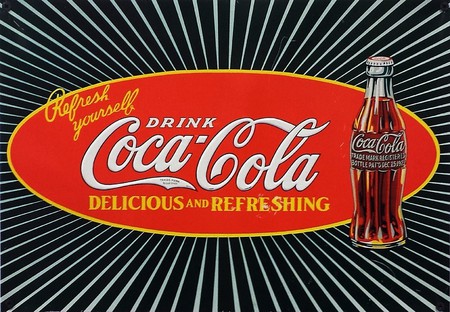 Coca-Cola | Public Domain/Pixabay
Give us feedback