Coffee is as much a part of American culture as are blue jeans and rock-n-roll. Although getting a late start on the coffee wagon, the US has since revolutionized the coffee scene, from the introduction of Starbucks to the modern resurgence in coffee rituals and expertise.

Coffee’s genesis, like most foods, is a story tangled within centuries-old folklore. A popular legend tells of a goat herder named Kaldi who is said to have discovered coffee beans on the Ethiopian plateau hundreds of years ago. His goats, which snacked on the ancient fruit-bearing shrubs, galloped around filled with energy. Testing the fruit himself, Kaldi had a similar reaction, disclosing his discovery with a local monastery. The abbot – who made a beverage from the red berry – shared the drink with other monks, and knowledge of the natural stimulant quickly spread across the continent.

Before a modern version of coffee appeared, its cherry-like fruit was used in a variety of preparations, some of which included wine-like substances. By the 15th century, coffee was being cultivated and traded in Arabia, and its beans – stripped from its pulp exterior – were roasted and brewed. Public coffee houses, called qahveh khaneh, sprang up across the east as places where people could exchange information over a cup of the much-loved potion. Traveling to Europe, coffee quickly became the morning beverage of choice over beer and wine, and by the mid-1600s, there were over 300 coffee houses in London – often frequented by famous artists, writers, and intellects.

Coffee was finally brought to the New World by the British in the mid-17th century. Coffee houses were popular, but it wasn’t until the Boston Party in 1773 that America’s coffee culture was changed forever: the revolt against King George III generated a mass switch from tea to coffee amongst the colonists. The demand for coffee flourished, and after the Dutch had secured coffee seedlings towards the end of the 1600s, coffee cultivation expanded outside of Arabia for the first time. Travelers and traders carried seeds to new lands, and coffee trees were planted across the globe. 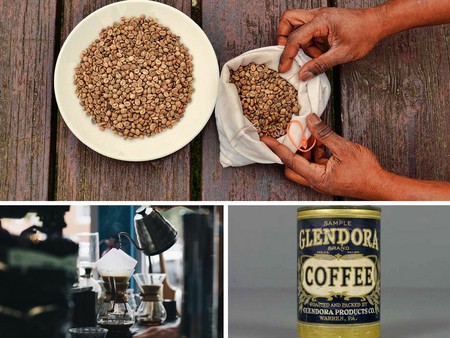 By the 18th century, coffee had become one of the world’s most profitable commodities. Consumption and popularity in the US increased, especially during the Civil War, and savvy businessmen were looking for a way to profit from it. In 1864, Pittsburgh-born brothers John and Charles Arbuckle began selling pre-roasted coffee by the pound, getting rich by selling it to cowboys in the West. James Folger, who sold coffee to gold miners in California, also saw great success. Several other big name coffee brands, including Maxwell House and Hills Brothers, quickly followed suit. Post-war, instant coffee was introduced to the market and remained popular until Starbucks opened in Seattle in 1971. Starbucks made coffee geographically available to people across America, tailoring the beverage to the unique palate of every customer.

Today, the coffee revolution continues to grow. A grass-roots movement that started in small, independently owned coffee shops is refining what Starbucks gave us: it’s now an artistic craft – much like that of wine or beer – that uses sustainable, locally roasted, fair trade beans. Where the beans are grown, how they are roasted, and the brewing process are all looked at closely. This coffee expertise is growing amongst young people, many using it as training for the culinary world. As much as a string of fresh rosemary or a juicy, ripe tomato bear a myriad of complex flavors, coffee does, too.