7 Prison Museums You Can Visit Across The US 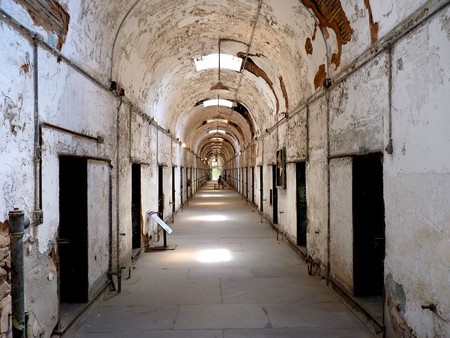 With over 100,000 prisons and jails around the globe, historic jail cells and prison museums have become a huge draw for tourists, and the US is no different – the states has over a dozen historic prisons to discover. From Alcatraz Island’s remote location off the shores of San Francisco to Eastern State Penitentiary’s famous haunted cells, learn about the histories and tales that characterize the past of these seven U.S. prisons.

Alcatraz is reputed to have housed some of the most dangerous prisoners of the 20th century, including mobster Al Capone and gangster Alvin Karpowicz; referred to as ‘the prison system’s prison,’ Alcatraz received the most difficult inmates. Built on an island off the coast of San Francisco, ‘The Rock,’ as it was nicknamed, made for a challenging escape, although over a dozen attempts were made – none of which were successful. Alcatraz was originally built in the 1850s as a U.S. military fortress and housed military prisoners until 1933, when it was renovated as a maximum-security prison. Alcatraz could hold 260–275 prisoners during its time of operation, less than one percent of the entire federal inmate population, but officially closed its doors in 1963 due to its high operating costs. 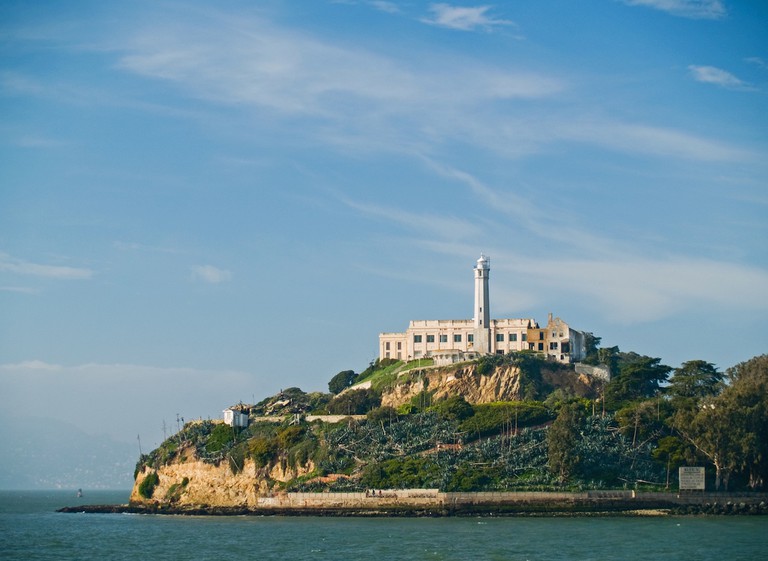 Eastern State Penitentiary (ESP) was part of a controversial movement in the early 1800s that advocated the use of solitary confinement and hard labor to alter the behavior of inmates. Designed in a ‘radial-style’ floor plan, ESP was one of the most costly buildings of its time, with vaulted ceilings, skylights, and 253 cells, each with its own toilet, running water, and heat. The layout and practices at ESP were so popular that they were replicated in over 300 other prisons worldwide; by the early 1930s, however, the prison abandoned the solitary confinement system, replacing it with other severe forms of punishment. Operating from 1829–1971, the prison held some of the nation’s most infamous criminals, including Al Capone (before his time at Alcatraz) and Willie Sutton; today, it’s considered one of the most haunted buildings in the world. 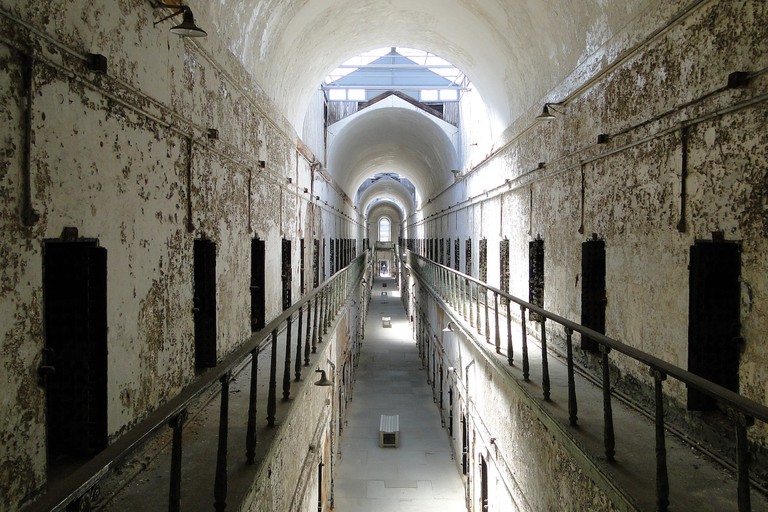 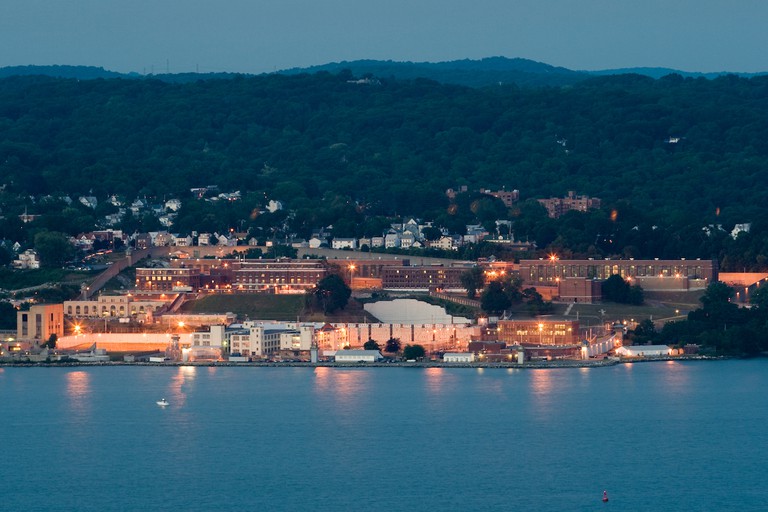 Sing Sing as seen from Hook Mountain across the Hudson River | © Brett Weinstein/WikiCommons
Home to the first electric chair (‘Old Sparky’), the famous Babe Ruth baseball game, and some of the nation’s most notorious criminals, like Albert Fish and David Berkowitz, Sing Sing is one of America’s most famous prisons. Built by 100 prisoners from another local prison, Sing Sing was one of the most impressive prisons of its kind upon its completion in 1828. Originally modeled after Captain Elam Lynds’ ‘silent system’ – the use of ‘hard work, community activity and silent reflection’ to alter inmate behavior – the prison eventually moved to a more modern approach that used sports to teach discipline, introduced by Warden Lewis Lawes. While the prison still holds more than 1,500 inmates today, plans for turning the prison’s 1939 power plant into a 22,000-square-foot museum are in the making. Visit the museum in the meantime, located in The Ossining Historical Society Museum.
Open In Google Maps
354 Hunter Street, Ossining, New York, 10562, USA
+19149410108
Visit Website
Give us feedback 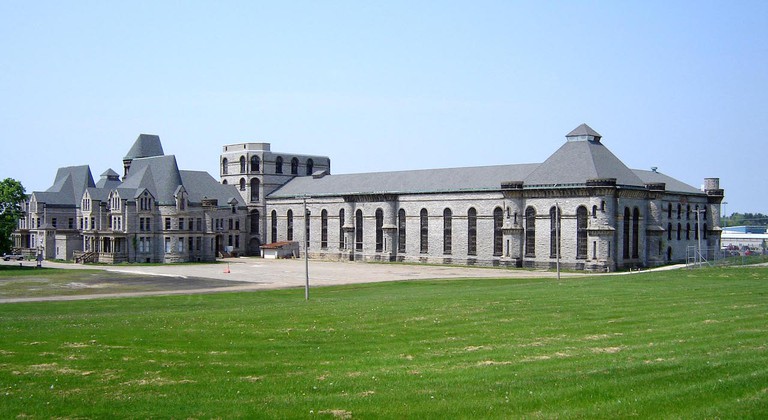 Mansfield Reformatory | © Mike Sharp/WikiCommons
The Ohio State Reformatory, also known as the Mansfield Reformatory, was constructed between 1886 and 1910 to act as an ‘intermediate penitentiary’, or the half-way point between the Boys Industrial School and the Ohio Penitentiary. In the mid-1800s, the land was originally used as Civil War training grounds; in 1884, plans for the new prison were approved by the state. Designed by Levi T. Scofield, the reformatory featured Victorian and Romanesque architectural styles, believed to encourage inmates to get in touch with their spiritual side. In 1990, the Boyd Consent Decree deemed the prison overcrowded and unsanitary – over 200 inmates had died during its operation – forcing it to close its doors. Today, the prison operates as a museum, and has been included in many famous films like The Shawshank Redemption (1994).
Open In Google Maps
100 Reformatory Road, Mansfield, Ohio, 44905, USA
+14195222644
Visit Website
Visit Facebook page
Give us feedback 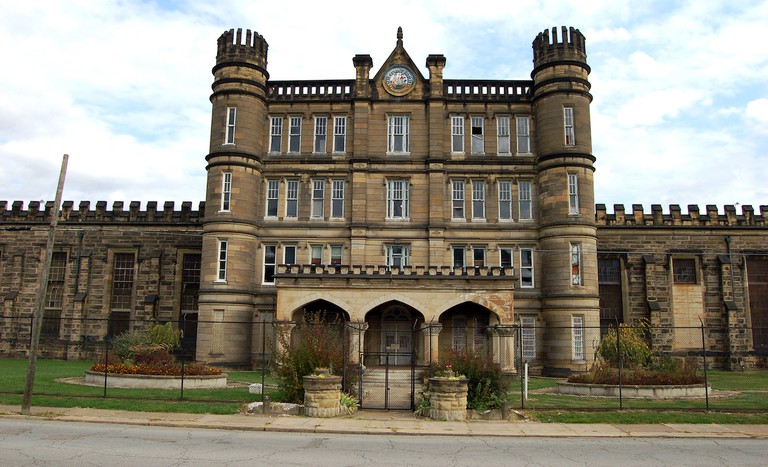 West Virginia Penitentiary | © Taber Andrew Bain/Flickr
After separating from Virginia at the height of the Civil War, West Virginia lacked many public institutions, including a prison. After repeated denials, the West Virginia Legislature finally purchased the land for the West Virginia State Penitentiary in 1886. Completed using prison labor in 1887, the prison’s design featured stone walls and Gothic architectural elements like turrets and battlements, modeled after a prison in Illinois, and included a hospital and chapel, adding a school and library later on. There were other services, like a carpentry shop and bakery, that provided jobs for inmates, making the prison self-sufficient. Despite its good conditions at the turn of the century, the prison went into a state of decline: there were over 36 homicides, a prison break in 1979, and a riot in 1986. The prison was ordered to shut down by the Supreme Court in 1986; it officially closed its doors in 1995. It was listed as one of the US Department of Justice’s Top Ten Most Violent Correctional Facilities and played host to 94 executions from 1899–1959: 85 by hanging and nine by electric chair. It is also considered one of America’s most haunted prisons.
Open In Google Maps
818 Jefferson Avenue, Moundsville, West Virginia, 26041, USA
+13048456200
Visit Website
Give us feedback

Old Idaho Penitentiary, once known as the Territorial Prison, was constructed in 1872 as a single-cell house; over the years, the prison expanded to include several buildings, as well as a 17-foot-high wall surrounding the complex. Over 101 years, until it closed in 1973, the Old Idaho Penitentiary received over 13,000 inmates, 215 of them women, and housed infamous convicts like Harry Orchard and Lyda ‘Lady Bluebeard’ Southard. The prison, however, was known for having unsuitable living conditions, and many inmates responded to these conditions with riots in 1971 and 1973. After its closing in 1973, the prison was placed on the National Register of Historic Places. 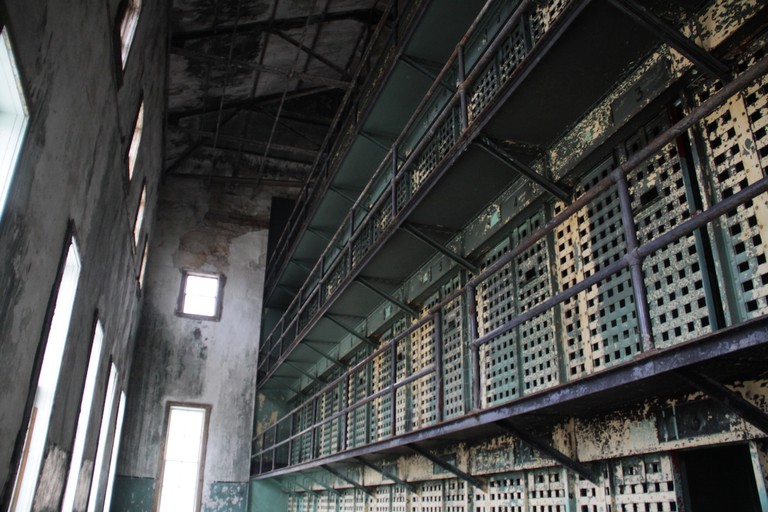 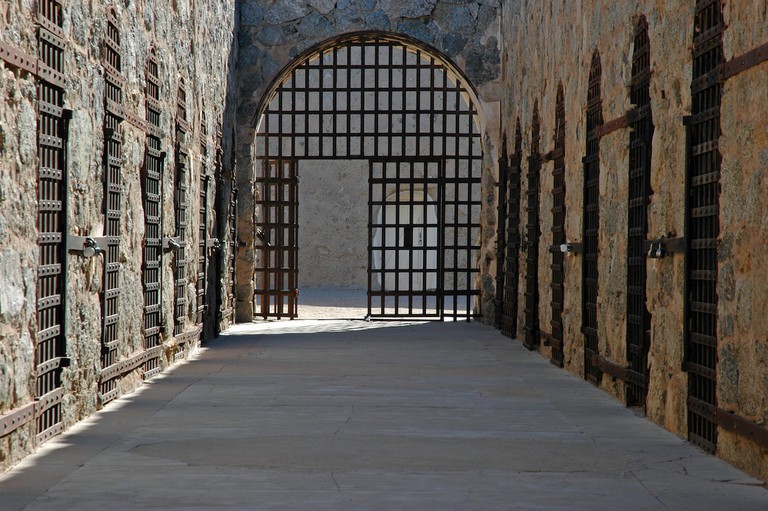 Arizona Territorial Prison, Yuma, Arizona | © Woody Hibbard/Flickr
Yuma Territorial Prison, now a historic state park, opened its doors in 1876, and its first inmates were seven men who were responsible for constructing the prison. During its 33 years of operation, the prison housed 3,069 prisoners, 29 of them women, and despite its infamous reputation, it is said to have had humane conditions – prisoners made hand-crafted items that were sold at Sunday public markets and they received regular medical attention; the prison also had one of the first public libraries in the territory, where prisoners learned how to read and write. No executions took place here, but over 26 inmates escaped and over 100 died (most from tuberculosis). By the turn of the century, the prison was overcrowded, so a new facility was built in Florence, Arizona, and the prison officially ceased operations in 1909.
Open In Google Maps
220 Prison Hill Road, Yuma, Arizona, 85364, USA
+19287834771
Give us feedback
Give us feedback