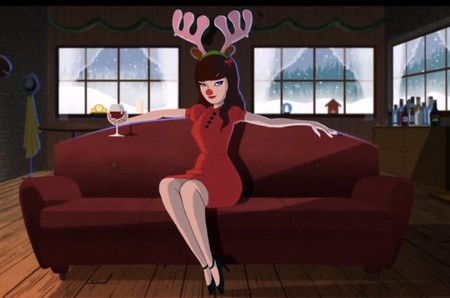 Still from She & Him – Baby It's Cold Outside

It’s that time of year again, Christmas! Time for gifts, family meetings, food, great meals, shopping, overplayed Christmas carols and more shopping. This year, instead of playing that same old CD compilation again, we’ve compiled our own Christmas alternative playlist just for you. Rather than crooners and kids choirs, our list ranges from established bands and artists to newcomers, from original songs to unique covers. We’ll unveil one new song everyday until December 24th, so think of this as your own musical advent calendar. Come back tomorrow (and the next day and the next!) to discover the next awesome Christmas song.

Still from She & Him – Baby It's Cold Outside

In 2011, the American folk/indie rock duo She & Him – ‘she’ for actress, musician and fashion icon Zooey Deschanel and ‘him’ for musician M. Ward – released an album full of covers of the holidays’ most classic songs. Rockin’ Around the Christmas Tree was originally performed by Brenda Lee in 1958.

In 2000, the Scottish indie pop led by Stuart Murdoch released a version of the traditional song O Come, O Come Emmanuel for the charity compilation album It’s a Cool Cool Christmas, in aid of the street newspaper The Big Issue. Jeepster Records also released the song as a single.

#3 “I Wish It Was Christmas Today” (Julian Casablancas)

The Strokes’ lead vocalist, Julian Casablancas, released I Wish It Was Christmas Today as a festive anthem full of synths, guitars and joyful bells. Sounds familiar” It was played before by Horatio Sanz, Jimmy Fallon, Chris Katten and Tracy Morgan on the American TV-show Saturday Night Live!

Here’s one little alternative classic we couldn’t possibly miss: everlasting music legends like Bing Crosby and David Bowie getting together for Christmas@ Peace on Earth/Little Drummer Boy was recorded for 1977’s Bing Crosby’s Merrie Olde Christmas’ TV-special and combines a version of the ‘drummer boy’ classic with a counterpart, Peace On Earth that was originally written for this performance. Five years later, the single was released along Bowie’s Fantastic Voyage as a B-side.

Everything’s Gonna Be Cool This Christmas is a rarity from the alternative rock band Eels. This is a wish for a cool Christmas celebration, straight from the husky voice of Mark Oliver Everett (“E”). It can be found in multiple B-sides and rarities compilations from the American band, and is likewise included with their 1998 single Cancer for the Cure.

Songs for Christmas, from the American singer-songwriter and multi-instrumentalist Sufjan Stevens, is probably the best known Christmas-themed indie album of these recent years. Composed of five separate EPs, self-recorded between 2001 and 2006, it’s actually difficult to pick up only one song from it, but It’s Christmas! Let’s Be Glad! is probably our favorite.

In 2004, the Welsh indie band Los Campesinos! released A Los Campesinos! Christmas, a six-track EP including previous Christmas releases, new tracks and a cover of Lonely This Christmas. The song was originally by glam rock band Mud and reached the Christmas number one in 1974. But the lead track When Christmas Comes is still our favorite.

From the Spice Girls to the cast of American TV-show “Glee”, many bands and artists have released covers of Christmas Wrapping, originally by the 1980s new wave band the Waitresses. Our favorite version, however, comes from the British twee-pop duo of Jeremy Warmsley and Elizabeth Sankey, Summer Camp. The song was released in 2010 as part of A Christmas Gif For You, a compilation from UK indie label Moshi Moshi.

Sheffield’s folk-duo Slow Club is another band from the UK indie label Moshi Moshi. In 2009, they released a Christmas EP: Christmas, Thanks for Nothing. As proven by the title, most of the songs here have a sad and melancholic touch, but the last one Christmas TV, brings a day-to-day Christmas atmosphere that will make you listen to it on loop.

In 2009, Barcelona-based indie label Bankrobber reunited the Catalan bands El Petit de Cal Eril and Anímic for a unique EP of six Cançons de Nadal (Christmas songs). Led by the beautiful voice of Animic’s British lead singer, Louise Sansom, this cover of Jingle Bells brings an atmosphere that works for both a fun Christmas day and a crazy Western film.

The School is an indiepop band from Wales, based in Cardiff. Their music is influenced by 60s music (The Ronnettes, The Shangri-Las, ect.) and other indiepop acts such as the Scottish bands Camera Obscura or Belle & Sebastian. Let Me Be The Fairy On Your Christmas Tree Tonight is a song included in 2012’s Christmas compilation from Elefant Records, a music label from Spain with international impact on the indiepop music scene.

A bluesy beat and a bright feeling-good vibe is what Garrett Dutton (G. Love) has to offer in Christmas Baby, a song included in the 2008’s Christmas compilation This Warm December: A Brushfire Holiday, Vol. I. With his band, G. Love & Special Sauce, Dutton offers a unique blues sound combined with classic R&B, not the most Christmas-related sound but really enjoyable, nonetheless.

We found this song in 2010’s A Christmas Gift For You from UK indie label Moshi Moshi. James, lead of the US band Idiot Glee sings along with Glasgow emotive pop singer Ela Orleans or Luisa Gerstein from the band Lulu and the Lampshades, depends on the version you’re listening to. There are many versions of the cozy winter duet song Baby, It’s Cold Outside but the original was recorded for 1949’s film Neptune’s Daughter.

In 2011, Brushfire Records released a new Christmas compilation with many more folkie original Christmas carols. This Warm December: A Brushfire Holiday, Vol. II included this slow tempo acoustic tune Let It Ride, by the Californian rock band ALO. We love the sound of Christmas in the Bay Area of San Francisco.

Let’s Make Christmas Love sings Duglas T. Stewart in this beautiful song by BMX Bandits. The Scottish band, highly influenced by 60s guitar playing, has being in the music business since 1986. They were re-vamped by indiepop label Elefant Records in 2012 for the release of a new LP and also for this contribution to their very own Christmas compilation in the same year.

In 2003, Justin Hawkins and his amazing vocal range made it to the second place in UK’s Christmas singles chart. Christmas Time (Don’t Let the Bells End), from his glam rock band The Darkness, features a sweet choir from the Haberdashers’ Aske’s Hatcham College in New Cross, London, where Hawkins started perfecting his famous falsetto as a student.

#17 “You Trashed My Christmas” (The Primitives)

A little more Christmas indiepop for your ears: Elefant Records’ special compilation in 2012 also featured You Trashed My Christmas by The Primitives. Formed in 1984, reformed in 2009, and led by vocalist Tracy Tracy and guitarist Paul Court, The Primitives offer a cheerful way to celebrate another Christmas broken heart.

There are probably no reindeers in Hawaii, but singer-songwriter, surfer, activist and filmmaker Jack Johnson had no inconvenience on paying a folky and happy tribute to this Christmas classic for the 2008’s Christmas compilation This Warm December: A Brushfire Holiday, Vol. I.

Allow us an 80s Christmas tune. Merry Christmas Everyone, by the Welsh singer Shakin’ Stevens has it all: that 80s look, a trip to the cold Scandinavian land where Santa Claus gets ready for the big day, awful Christmas jumpers, a catchy rhythm and a funny cheerful dance. Maybe it’s not the most ‘alternative’ music ever but everybody knows hipsters are bringing 80s back, right?

An Irish immigrant in New York remembering past Christmas Eve’s back home, this is the background story of Fairytale of New York by Celtic folk punk band The Pogues. An Irish folk-style ballad released in 1988, written by Jem Finer and Shane MacGowan, featuring Kirsty MacColl on female vocals The song was a successful trial of Christmas song by the Celtic band, as requested by their record producer at that time, Elvis Costello.

Slade, the rock band from Wolverhampton, was one of the most successful British bands in the 1970s, with several consecutives hits. The sixth hit single from Slade to reach the number one on UK charts was this Merry Christmas Everybody, written by the lead lead vocalist and guitarist Noddy Holder and bassist Jim Lea. The song was released on December 1973 and stayed on top of the charts well into February 1974. Ten years later, it was performed on TV, at Top of the Pops, as the band was presenting a new (and not so-successful single), My Oh My.

Ain’t no Christmas songs without a sweet choir of kids in the background. Holding Hands Around The World is a cheesy but beautiful song of love and unity by Spanish pop-wizard Guille Milkyway (better known for his project La Casa Azul) from the kids TV-show Jelly Jamm. The song was also included in the 2012’s Christmas compilation compiled by the indiepop music label Elefant Records.

When the author is a music legend, we can make an exception and include a Christmas standard to this alternative playlist. Happy Xmas (War Is Over) was not only released as a song for Christmas celebration, but a protest song. It’s a message for peace against the Vietnam War, which was taking place in 1971 when the song was released. John Lennon made it an anthem for a global campaign for peace, with huge billboards announcing the title message in the biggest city avenues around the world. The song was written by John Lennon and Yoko Ono (The Plastic Ono Band) with the Harlem Community Choir. On its release, the song reached fourth in UK single charts. Later on, after Lennon’s death, it peaked to the second position and has been a Christmas standard ever since.

#24 “Killing In The Name” (Rage Against The Machine)

This is not a Christmas song and maybe not the one you’re expecting to play while you’re preparing for the big day, but we wanted to finish this 24-songs playlist unconventionally. The American rap metal band Rage Against the Machine released Killing In The Name in their debut self-titled album, back in 1992, but the song regained popularity seventeen years later in 2009. A group of active social media users led by DJ Jon Morter started a campaign to dethrone the overproduced pop music from talent shows such as X Factor. The campaign was a great success and the song became 2009’s Christmas number 1 in the UK. Proceeds from the single’s second glory went to homeless charity Shelter.

Should we start planning a new playlist for 2016’s Christmas? If you have any suggestions feel free to leave them in the comments…