21 Scenic Places to Go Camping in the United States

21 Scenic Places to Go Camping in the United States

Mount Rainier National Park | © Navin Rajagopalan / Flickr
For adventurers who enjoy spending time in the great outdoors, camping is a popular recreational activity. And when you go camping somewhere that has scenic views, the experience is even more enjoyable. Here’s where to take in some of the most stunning views at campgrounds in the United States.

Park
Acadia National Park | (c) heipei / Flickr
When you visit Acadia National Park in Maine, you have almost 50,000 acres of mountains, pine forests and ocean views to explore. There are several different campgrounds within the park, including Blackwoods Campground, Seawall Campground, and Schoodic Woods Campground. On Isle au Haut, an island off the coast of Maine, there is also a campsite called Duck Harbor Campground, which is reachable by mailboat only. There are five campsites available from May 15th to October 15th.
More Info
Open In Google Maps
Maine, USA
+12072883338
View menu
Visit website
Visit Facebook page
Send an Email
Give us feedback

The highest mountain in North America, reaching 20,310 feet (6,190 meters) above sea level, is Denali, located in Alaska. It’s here where you’ll find Denali National Park and Preserve. While certain parts of the park and preserve are inaccessible, there are four camping areas within the interior of the park. Camper buses are available for visitors who have reservations at the campgrounds; otherwise, access to the mountains is only available via air taxi from the Kantishna Airport. 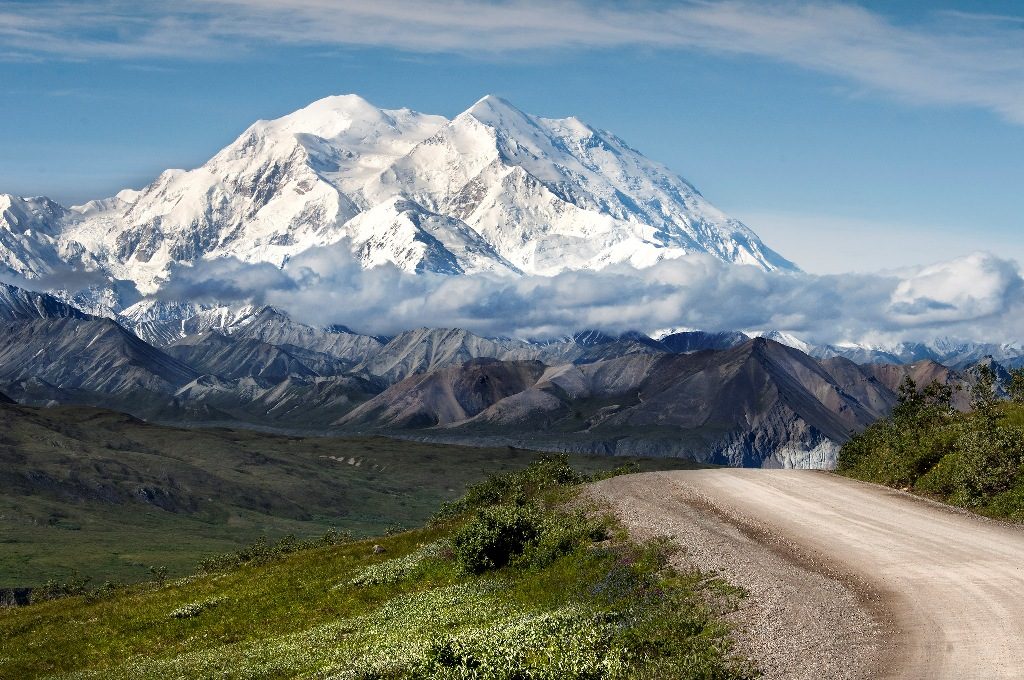 Spanning portions of several counties in Northern California, Yosemite National Park set a visitation record in 2016, surpassing five million visitors for the first time in its history. The park reaches across the Sierra Nevada Mountains and is internationally recognized for its biological diversity. Among the 13 campgrounds located inside the park, you’ll find stunning views of waterfalls, lakes, glaciers, and Sequoia groves. Most campgrounds at Yosemite require a reservation, especially during the peak season, which is between the months of April and September. 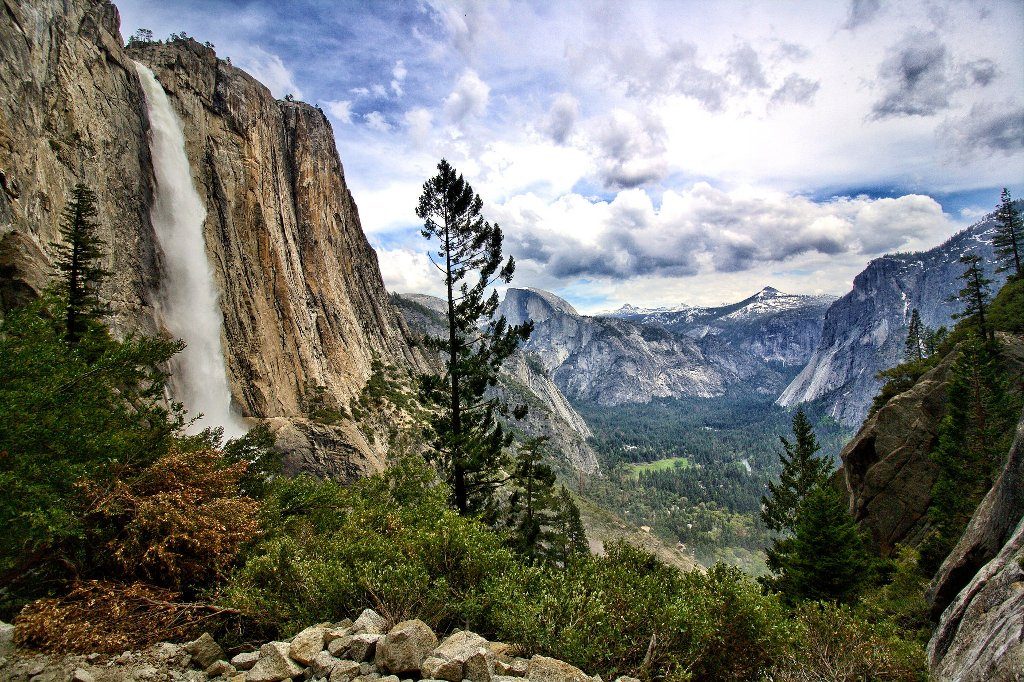 Contrary to its name, Saranac Lake is actually a village in New York named after the nearby Upper, Middle, and Lower Saranac Lakes. The village lies within the boundaries of Adirondack Park, west of Lake Placid, and the edges of the village do not touch the shores of any of the three lakes. There are more than 85 campgrounds available in the area, and some are only accessible by boat. 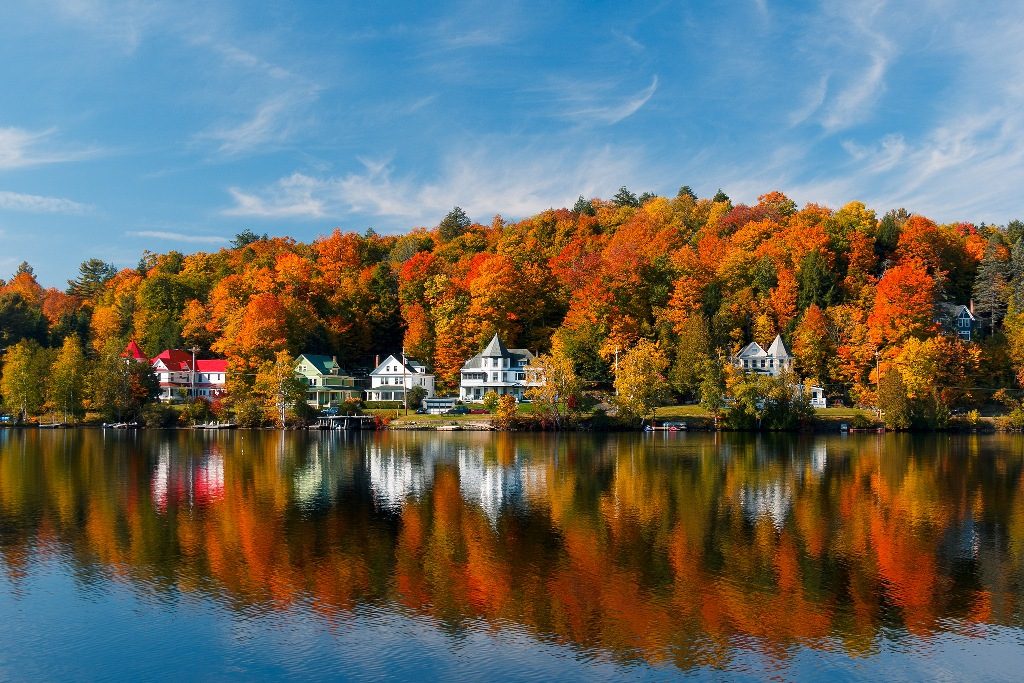 Forest
Sawtooth National Forest | (c) Intermountain RegionUSFS / Flickr
In the state of Idaho is Sawtooth National Forest, which has more than 81 campgrounds. Backcountry camping is available and requires taking hiking trails and then either backpacking or horseback riding to remote locations. Redfish Lake in Sawtooth Valley has a lodge with a marina, and hot springs across the forest are open to the public, including the 111°F (43.9°C) pool at Baumgartner Campground.
More Info
Open In Google Maps
Idaho 75, Stanley, Idaho, 83278, USA
+12087373200
View menu
Visit website
Visit Facebook page
Send an Email
Give us feedback

Park
Zion National Park | (c) Graeme Churchard / Flickr
Near Springdale, Utah is Zion National Park. With canyons, rivers, mountains, mesas and natural arches, Zion lies at the junction of the Colorado Plateau, the Great Basin, and the Mojave Desert. Zion Canyon sits within the park and cuts through reddish-colored Navajo Sandstone by the North Fork of the Virgin River. Halfway through the canyon is Zion Lodge, which has motel units and cabins, as well as three campgrounds. Zion Lodge is open year-round, and the only campground that takes reservations is Watchman. Permits are required for overnight camping in the backcountry.
More Info
Open In Google Maps
Utah, USA
+14357723256
View menu
Visit website
Visit Facebook page
Send an Email
Give us feedback

Forest
Carson National Forest | (c) Greg Westfall / Flickr
From Agua Piedra Campgroundto Elephant Rock to Fawn Lakes, there are plenty of camping choices within Carson National Forest; however, visitors may camp anywhere within the forest, with a 14-day camping limit, as it has a “mixed use” policy that allows anyone to use it for recreation, grazing, and resource extraction. Carson National Forest is not only home to Wheeler Peak, the highest mountain in New Mexico, at 13,161 feet (4,011 meters), but also many big game animals, including elk, black bears, and cougars.
More Info
Open In Google Maps
New Mexico, 87530, USA
View menu
Visit website
Visit Facebook page
Send an Email
Give us feedback

Park
Grand Canyon Tour | © GetYourGuide
The Grand Canyon is a gorge of the Colorado River and lies within Grand Canyon National Park. While there is no camping allowed in the canyon, the park does have several campgrounds available. On the south rim is Mather Campground, which is open all year, and on the north side is North Rim Campground, which is available May 15th through October 31st. There are also several lodges along the south rim, as well as the Trailer Village RV Park.
More Info
Open In Google Maps
Arizona, USA
+19286387888
View menu
Visit website
Visit Facebook page
Send an Email
Give us feedback

Camping
Bahia Honda | (c) Giuseppe Milo / Flickr
Several campgrounds offering waterfront camping are available at Bahia Honda State Park in Florida. Buttonwood Campground can accommodate small tents and RVs, due to it having the largest sites in the park. Sandspur Campground, located in a hardwood hammock, has small sites for tents and small pop-up campers under eight feet tall. Bayside Campground, the smallest campground at the park, has just eight campsites, and all vehicles must be able to go under the Bahia Honda Bridge to access the campground. The park also has a marina with boat slips for overnight rental and vacation cabins.
More Info
Open In Google Maps
36850 Overseas Highway, Big Pine Key, Florida, 33043, USA
+13058722353
View menu
Visit website
Visit Facebook page
Send an Email
Give us feedback

Park
Mount Rainier National Park | © Navin Rajagopalan / Flickr
If you’d like to camp out near glaciers, head to Mount Rainier National Park in Washington. Just through a rainforest in the park is a trail that leads to Carbon Glacier, the largest glacier by volume in the contiguous United States. South of the glacier is Mowich Lake, which has a campground and picnic area. There is also Ohanapecosh, a campground with 188 campsites that is open from May through October. Also in the area are Silver Falls, Grove of the Patriarchs, and the Ohanapecosh Hot Springs.
More Info
Open In Google Maps
Washington, USA
+13605692211
View menu
Visit website
Visit Facebook page
Send an Email
Give us feedback

Park
Great Smoky Mountains National Park | (c) Phil Horton / Flickr
Straddling the border between Tennessee and North Carolina, the Great Smoky Mountains National Park is the most visited national park in the United States. Several different types of camping are available within the park. Backpackers can enjoy backcountry camping through Mt. LeConte Shelter, Kephart Shelter and Laurel Gap Shelter. There are also campsites that can be reserved in a developed campground, as well as horse camps that offer primitive camping facilities. For a more refined camping experience, you can stay at the LeConte Lodge, which sits on an open glade below the summit of Mt. LeConte and is the highest guest lodge in the eastern United Staters.
More Info
Open In Google Maps
Bryson City, North Carolina, USA
+18654361200
View menu
Visit website
Visit Facebook page
Send an Email
Give us feedback

Located in Arkansas, Ozark-St. Francis National Forests are two separate forests, Ozark and St. Francis. Between the two forests, there are 23 campgrounds along the rivers and lakes or in the mountains. Primitive camping is allowed anywhere in the forest where signs aren’t posted prohibiting it. The campgrounds include swimming areas and nearly 400 miles (636 kilometers) of hiking trails. Some campgrounds are available year-round, while others are only available from May through October. 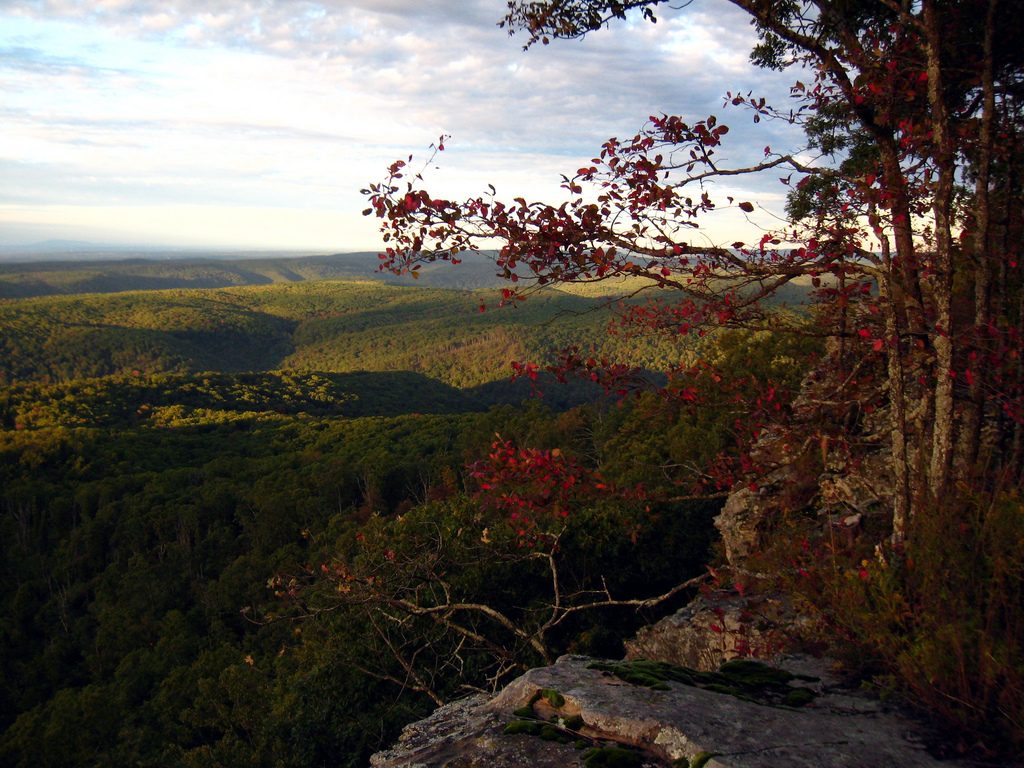 Park
Crater Lake National Park | (c) Nick Pelletier / Flickr
The fifth-oldest national park in the United States is Crater Lake National Park in Oregon, and it’s the only national park in the state. There are two developed campgrounds within the park: Mazama Village Campground and Lost Creek Campground. Mazama can accommodate tents and RVs, and Lost Creek is a tent-only campground. Both are only open in the summer and are located in forests south of the lake. Every campsite features a picnic table, a fire ring equipped with a grill, and a metal bear box for food.
More Info
Open In Google Maps
Oregon, USA
+15415943000
View menu
Visit website
Visit Facebook page
Send an Email
Give us feedback

Forest
Gunnison National Forest | (c) David / Flickr
Covering more than 1,672,136 acres, Gunnison National Forest lies in parts of five different counties in Colorado. Almost every forest service road in the area has dispersed campsites where people camp out on side roads. Some are tucked away in secluded areas, while others are nestled in meadows of wildflowers off the beaten path. There are developed campgrounds in the forest, and most can accommodate campers, tents, and small trailers. The limit for most campgrounds is 14 days, and signs are posted on bulletin boards at each campground with information.
More Info
Open In Google Maps
Ohio City, Colorado, 81237, USA
+19706410471
View menu
Visit website
Visit Facebook page
Send an Email
Give us feedback

Located along the Canada-United States border is Glacier National Park in Montana. It encompasses over one million acres, including parts of two mountain ranges and over 130 lakes. Most of the campgrounds at the park sit near the larger lakes and are usually open from mid-June until mid-September. Two campgrounds, St. Mary and Apgar, are open year-round. However, during the off-season, camping conditions at the sites are primitive, with no running water or accessible restroom facilities. 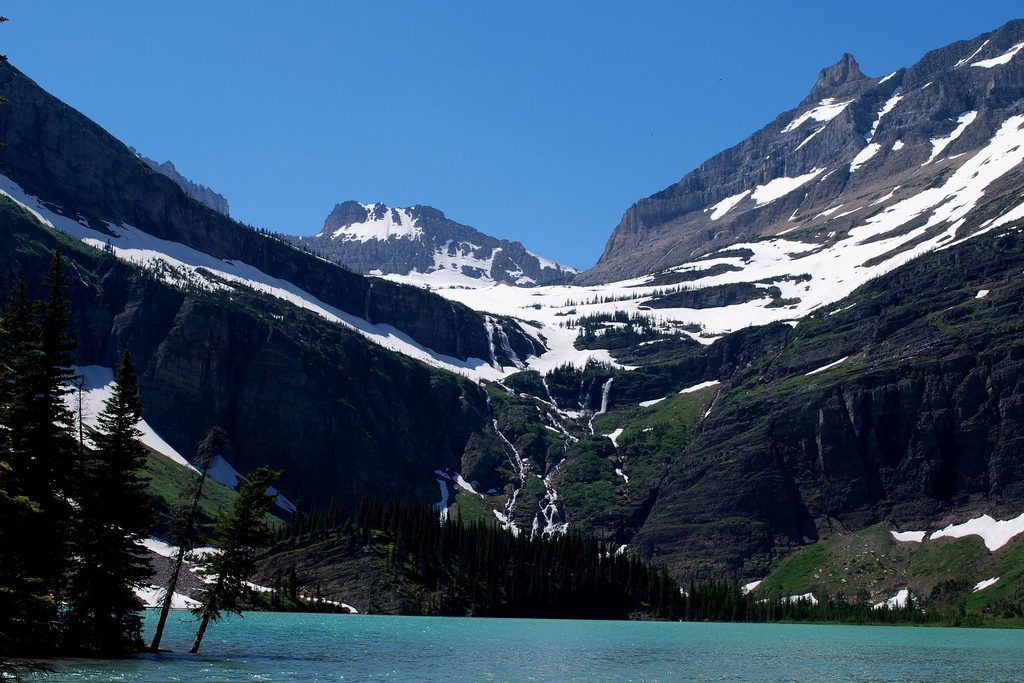