20 Must-Visit Attractions in the United States

Golden Gate Bridge | © Tom Hilton / Flickr
The United States attracts millions of visitors each year. Whether you’re a U.S. resident looking for something new to experience, or you’re headed to America for the first time, these 20 attractions need to be on your list of places to explore.

The most visited vacation resort in the world, Walt Disney World opened in 1971 and is located near Orlando, Florida. The attraction is part of Walt Disney World Resort, which has 27 themed hotels, four theme parks and two water parks. The first theme park to open at the resort was Magic Kingdom, followed by Epcot and Disney’s Animal Kingdom. Each park offers plenty of family-friendly entertainment, including rides, live shows, tours and special events.

Historical Landmark
Designed by French sculptor Frederic Auguste Bartholdi, the copper Statue of Liberty was a gift to the United States from the people of France. The female figure represents the Roman goddess Libertas and has become both a symbol of freedom and a way to welcome immigrants from abroad. The statue is located on Liberty Island in New York City. Due to safety reasons, public access to the balcony surrounding the torch has been banned since 1916. In 2016, construction for a new Statue of Liberty Museum was started, which will feature a theater where visitors can watch an aerial view of the statue. The original torch was also be relocated there.
Looks like it's closed Hours or services may be impacted due to Covid-19
More Info
Open In Google Maps
Manhattan New York, New York, 10004, USA
+12123633200
View menu
Visit website
Visit Facebook page
Send an Email
Give us feedback

Starting with president John Adams in 1800, the White House has been the official residence of every U.S. president. It includes an Executive Residence, a West Wing and East Wing and the Eisenhower Executive Office Building. The property is owned by the National Park Service and offers free self-guided tours Tuesday through Thursday. However, all public tour requests must be submitted through a member of Congress. Those wishing to visit the White House who are from another country must contact their country’s embassy in Washington, D.C.

It’s where notorious criminal Al Capone was imprisoned in cell 181, and now it’s a small island offshore from San Francisco. Alcatraz served as a federal prison from 1934 through 1963. The Island has several landmarks, including the Warden’s House, Main Cellhouse and the Lighthouse, which was the oldest operating lighthouse on the West Coast. While the prison claimed that no prisoner escaped during its 29 years in operation, 36 prisoners made 14 escape attempts. In 1946, six prisoners tried to escape and failed, leading to the Battle of Alcatraz.

Named for New York, the Empire State, this 102-story building has a roof height of 1,250-feet. It was the world’s tallest building for 40 years, until the original World Trade Center’s North Tower stood over it. It’s currently the fifth tallest skyscraper in the United States and the 34th tallest in the world. The building was designated a National Historic Landmark in 1986 and has been named one of the Seven Wonders of the Modern World by the American Society of Civil Engineers.

Founded in 1925 as a one-hour radio “barn dance,” the Grand Ole Opry is the longest running radio broadcast in U.S. history. The weekly country music stage concert is held at the Grand Ole Opry House in Nashville, except during the winter months when it moves to the Ryman Auditorium. The Opry is dedicated to honoring country music and musicians, from historical legends to contemporary artists.

It was originally known as “The Six Grandfathers,” and was renamed in 1885 after prominent New York lawyer Charles E. Rushmore. The Mount Rushmore National Memorial is located in Keystone, South Dakota and features 60-foot sculptures of the heads of four U.S. presidents: George Washington, Thomas Jefferson, Theodore Roosevelt and Abraham Lincoln. Construction on the memorial began in 1927 and was completed in 1939. Each president was originally going to be depicted from head to waist, but lack of funds forced construction to end prior to completion.

Park
Carved by the Colorado River, the Grand Canyon is a steep canyon located in Arizona. It is 277 miles long and nearly 18 miles wide. It was inhabited by Native Americans for thousands of years, who considered it a holy site. Because of its steep formation, extreme weather components and often foggy views, there have been more than 600 deaths at the Grand Canyon since the 1870s. The cause of these deaths range from falls to heat stroke to drownings in the Colorado River. In 2016, the first Grand Canyon Skydiving operation opened on the South Rim of the Grand Canyon National Park Airport.
Looks like it's closed Hours or services may be impacted due to Covid-19
More Info
Open In Google Maps
Arizona, USA
+19286387888
View menu
Visit website
Visit Facebook page
Send an Email
Give us feedback

Originally designed to advertise the name of a segregated housing development, the Hollywood Sign is situated on Mount Lee in the Hollywood Hills and overlooks Hollywood. It was left up after the rise of American cinema in Los Angeles started earning the sign recognition. The word “Hollywood” is spelled out in 45-foot tall white letters, reaching 350-feet long. While you can get close to the sign for great photo opportunities, it is illegal to climb on, and there is security on the property to ensure that nobody gets too close.

Bridge
Golden Gate Bridge | © Tom Hilton / Flickr
Book Now
Between San Francisco Bay and the Pacific Ocean is the Golden Gate Bridge, which spans the Golden Gate strait at 4,200-feet. It was originally painted with red lead primer and a lead-based topcoat until the mid 1960s when the bridge was repainted. Today, nearly 40 painters touch up the work when it gets eroded. The official color of the bridge is called international orange, and was selected by architect Irving Morrow, who chose it because it complements the surroundings of the area and makes the bridge more visible in foggy conditions.
More Info
Open In Google Maps
Golden Gate Bridge, San Francisco, California, USA
+14159215858
View menu
Visit website
Visit Facebook page
Send an Email
Give us feedback

The second most visited house in the U.S., next to the White House, is Elvis Presley’s former estate, Graceland. Located in Memphis, it is now a museum that attracts over 650,000 visitors a year. Elvis Presley purchased Graceland in 1957 and lived there until his death in 1977. Today, the museum offers tours that take visitors through all 23 rooms in the house, including the Jungle Room, which Presley converted to a recording studio that he used for his two final albums. You’ll also see the painting that was Elvis’ last Christmas gift from his father hanging in the Music Room.

With more than 50-acres of parks, shops, restaurants and a large Ferris wheel, Navy Pier is a popular tourist spot in Chicago. The 3,300-foot long pier was named Navy Pier in 1927 to honor naval veterans who served in World War I. It was opened to the public in 1916 and was built by nationally-acclaimed architect Charles Sumner Frost. In May 2016, a new 196-foot Ferris wheel was opened, which has brighter lights and extended rides from seven minutes to 12 minutes. 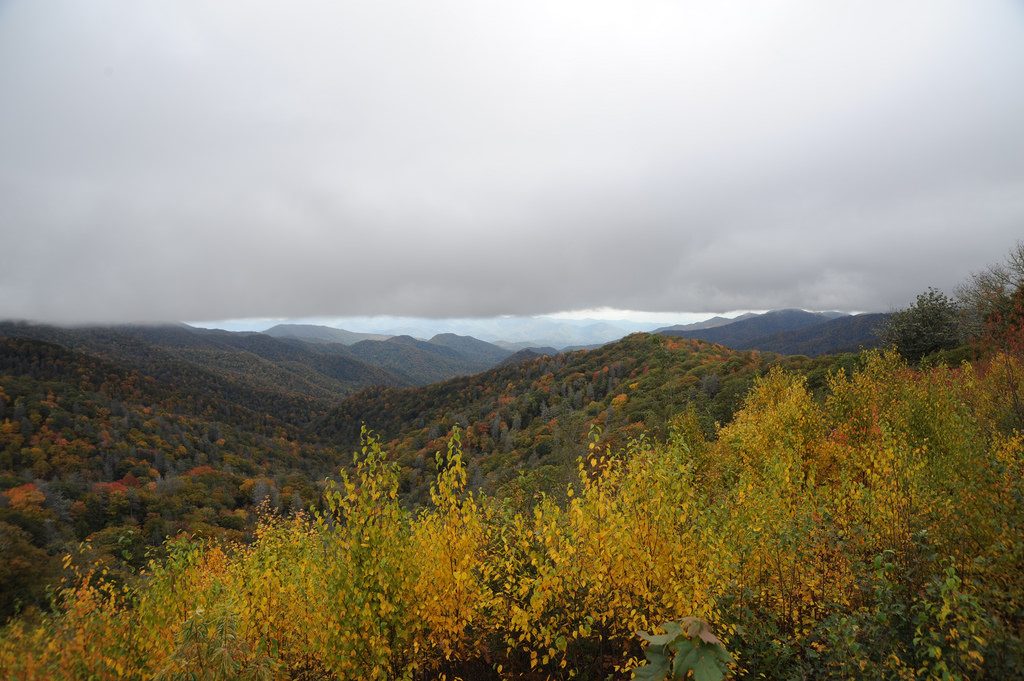 Building, Casino
Aerial view of the Las Vegas Strip | © lucky-photographer / Alamy Stock Photo
Book Now
Even though it’s not technically located in Las Vegas (it is actually south of the city), the Las Vegas Strip is considered a top spot to visit in Nevada. With resorts, hotels and casinos lining the 4.2 mile stretch, the Strip is a popular destination for adult travelers. Some of the most popular hotels (which have casinos inside) visited by tourists are Caesars Palace, MGM Grand, Excalibur and The Bellagio. Many high-profile performers like Elvis Presley, Elton John and Celine Dion have performed at venues in Las Vegas, attracting millions of visitors every year.
More Info
Open In Google Maps
Nevada, USA
View menu
Visit website
Visit Facebook page
Send an Email
Give us feedback

The oldest neighborhood in New Orleans is the French Quarter. The name was derived from the changes that occurred in the city after the Louisiana Purchase. The French Quarter district has been designated a National Historic Landmark and is a prime tourist destination, especially during the annual Mardi Gras celebration. The area features restaurants, shops, local events and art displays up and down the streets. 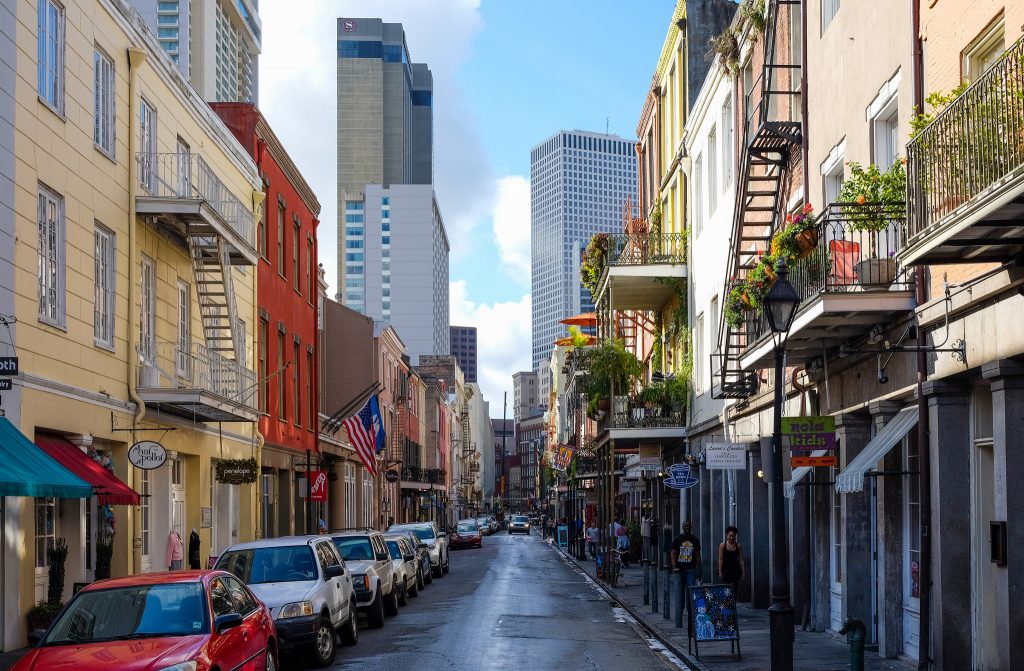 Located on the central coast of California is Hearst Castle. It was designed by architect Julia Morgan for newspaper magnate William Randolph Hearst, who died in 1951. The castle features 56 bedrooms, 61 bathrooms, and once was the site of the world’s largest private zoo. There is also the Neptune Pool, which gives visitors a scenic view of the mountains and the ocean, however, the pool is drained due to drought conditions.

Up and down Hollywood Boulevard and Vine Street in Hollywood, California are more than 2,600 terrazzo and brass stars embedded in the sidewalks. These stars bear the names of prominent figures in the entertainment industry who have achieved a high level of success with their work. The five points on each star represent the categories from which each honoree is selected. These categories are motion pictures, broadcast television, audio recording, broadcast radio and live performance. Each star contains an emblem symbolizing the category, which is located below the entertainer’s name. Approximately 20 new stars are added to the Walk of Fame every year. 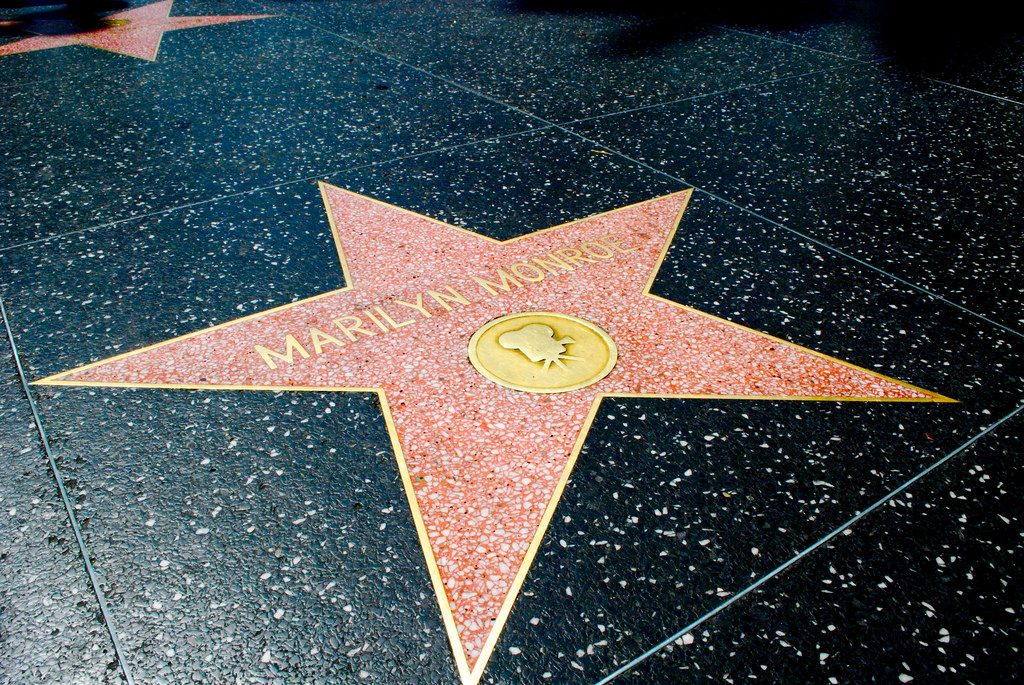 Bridge
Brooklyn Bridge | © Rafa Win / Flickr
It was originally referred to as the New York and Brooklyn Bridge, as well as the East River Bridge until it was renamed by the city government in 1915. The Brooklyn Bridge is a National Historic Landmark that connects the boroughs of Manhattan and Brooklyn. It was the first steel-wire suspension bridge constructed and spans 1,595.5-feet across the East River. The bridge has a wide pedestrian walkway in the center, above the lanes used by automobiles.
More Info
Open In Google Maps
Brooklyn Bridge, New York, New York, 10038, USA
View menu
Visit website
Visit Facebook page
Send an Email
Give us feedback

Built to honor President Abraham Lincoln, the Lincoln Memorial is located across from the Washington Monument in Washington, D.C. A large seated sculpture of Lincoln was carved by the Piccirilli Brothers and took four years to complete. The building, which models a Greek Doric temple, features inscriptions from two of Lincoln’s speeches, “The Gettysburg Address” and his second inaugural address. The memorial was the site of Martin Luther King Jr.’s “I Have a Dream” speech, which he gave in 1963. The monument is open to the public 24 hours a day and attracts more than six million visitors each year.