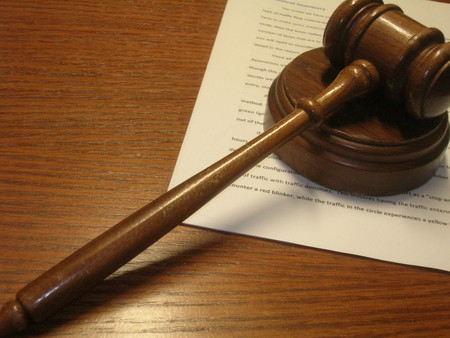 What makes for a truly gripping courtroom drama? Corrupt legal systems? Injustices revealed? More plot twists than you can shake a stick at? We’ve rounded up some of the most fascinating courtroom dramas – some fictional, some based on real-life criminal cases – for films buffs to enjoy, from the 1957 classic 12 Angry Men to British fact-based film Let Him Have It.

In Primal Fear, Chicago defense attorney Martin Vail (Richard Gere) takes on a pro bono case representing a young altar boy Aaron Stampler (Edward Norton), accused of the brutal murder of Catholic clergyman Archbishop Rushman. The case is further complicated when it comes to light that Roy was the victim of sexual abuse at the hands of Archbishop Rushman, and that the defendant may be suffering from multiple personality disorder caused by years of abuse. It all culminates in a brilliantly acted twist ending that put Norton – in his first film role – firmly on the map, earning him a Golden Globe for Best Supporting Actor.

Loosely based on the real-life case of Cheryl Araujo in New Bedford, Massachusetts, The Accused stars Jodie Foster as Sarah Tobias – a victim of a brutal gang rape in a bar, during which her attackers were cheered on by onlookers – and the ensuing trial in which her intoxicated state, ‘provocative’ behavior and dress were questioned in court. Notable as one of the first mainstream Hollywood films to focus exclusively on rape, Foster’s performance in The Accused earned the actress her very first Academy Award for Best Actress.

Listed amongst the American Film Institute’s 100 Years … 100 Movies, a compilation of the greatest American films of all time, 12 Angry Men – based on American writer Reginald Rose’s teleplay of the same name – is today regarded as a cinematic classic. A gripping look at the jury deliberation process, the film stars Henry Fonda – who alongside Rose co-produced and co-financed 12 Angry Men, with Sidney Lumet directing – as Juror 8, a dissenting ‘not guilty’ voter trying to convince his fellow jury members that the case they are presiding over may not be so clear-cut.

To Kill a Mockingbird

Based on Harper Lee’s award-winning novel of the same name, director Robert Mulligan’s To Kill a Mockingbird was released in 1962 to widespread critical acclaim and went on to win three Oscars (Best Adapted Screenplay, Best Art Direction in Black and White, and Best Actor for its star Gregory Peck) at the 35th Academy Awards. Set in a fictional Alabama town during the 1930s against a backdrop of racial tension, the film sees Peck’s character – the lawyer Atticus Finch – defending a black man wrongly accused of raping a white woman. Not only was the film named the ABA (American Bar Association) Journal’s greatest legal film ever made, To Kill a Mockingbird was also inducted into the National Film Registry in 1995 for its cultural and historical importance.

One of the first major films to address AIDS discrimination, Philadelphia stars Tom Hanks as Andrew Beckett, a gay corporate lawyer fired from his prestigious law firm after his bosses find out he has AIDS, under the pretense of incompetence, and Denzel Washington as Joe Miller – an initially homophobic and reluctant young lawyer that takes on his case. Compelling and emotional, the film was partly inspired by the real-life lawsuit of attorney Geoffrey Bowers and earned its lead Hanks a number of awards, including both an Oscar and a Golden Globe for Best Actor.

Anatomy of a Murder

In Anatomy of a Murder, small-town Michigan lawyer Paul Biegler (James Stewart) takes on the case of Frederick Manion (Ben Gazzarra), a US army lieutenant charged with the first-degree murder of a bartender he believed had raped his wife, Laura (Lee Remick). Interestingly, not only was the film adapted from a book penned by Michigan Supreme Court Justice John D. Voelker, Anatomy of a Murder’s Judge Weaver was played by real-life lawyer Joseph N. Welch – who also acted as chief counsel for the US Army in the 1954 Army-McCarthy hearings and more than holds his own amongst the movie’s all-star cast.

A Cry in the Dark

Based on the 1980 case of Azaria Chamberlain – a nine-week-old baby abducted and killed by a dingo during a camping trip with her family at Ayers Rock, Australia – A Cry in the Dark stars Meryl Streep and Sam Neill as her parents, Lindy and Michael Chamberlain, accused of Azaria’s murder. Mirroring the real trial, the film scarily depicts Lindy’s ‘trial by media’ – which saw various press make sensational claims such as the Chamberlains, as Seventh-Day Adventists, believed in child sacrifice – and the ensuing lynch mob mentality that followed and resulted in her conviction. Thankfully, although she spent three years wrongfully imprisoned for her daughter’s murder, the real-life Lindy was eventually exonerated in 1987.

Inspired by the Nuremberg Military Trials in post-Nazi Germany, Judgment at Nuremberg stars Spencer Tracy as Chief Judge Dan Haywood, an American presiding over the trial of four German soldiers accused of crimes against humanity for their part in the atrocities committed by the Nazi regime. During the trial, Haywood wanders the streets of Nuremberg talking to a number of Germans in an attempt to understand how the nation could have turned a blind eye to the Nazi Party’s activities. Alongside To Kill a Mockingbird, 12 Angry Men and Anatomy of a Murder, the film is amongst those listed on the Library of Congress’ National Film Registry.

The Verdict stars Paul Newman as Frank Galvin – once a promising lawyer, now an unsuccessful, alcoholic ‘ambulance chaser’ – who takes on a medical malpractice suit involving a young woman left in a persistent vegetative state, following a wrongly administered anaesthetic at a Catholic hospital in a last-ditch attempt to revive his flailing career. Directed by Sidney Lumet, the same mind behind 12 Angry Men, and scripted by playwright David Mamet, the film was listed amongst the Writers Guild of America’s 101 Greatest Screenplays in 2013.

A fictionalized retelling of the infamous Scopes Monkey Trial of 1925, Inherit the Wind is the story of Bertram Cates – a school teacher in a small southern town standing trial for violating state law in his teaching of the theory of evolution as opposed to creationism – and Henry Drummond (played by Spencer Tracy) as the lawyer defending him. Directed by Stanley Kramer, who also directed Judgment at Nuremberg, the film was based on the 1955 play of the same name written by Jerome Lawrence and Robert Edwin Lee, who intended to use the Scopes Monkey Trial as an allegory for the then-current McCarthy Trials.

When young New Yorker Billy and his friend Stan are wrongfully charged with the murder of a convenience store clerk in a small Alabama town, Billy’s relative Vincent LaGuardia ‘Vinny’ Gambini – an inexperienced personal injury lawyer from Brooklyn who only passed the bar exam after his sixth attempt – arrives to defend the pair in British director Jonathan Lynn’s 1992 comedy, My Cousin Vinny. Though a comedy it may be, My Cousin Vinny has been praised by several legal professionals for its accurate portrayal of courtroom procedures and scooped Marisa Tomei, as Vinny’s girlfriend Mona Lisa Vita, an Oscar for Best Supporting Actress.

Witness for the Prosecution

Adapted from a short story and play by legendary English crime writer Agatha Christie, Witness for the Prosecution – directed by Some Like It Hot and The Apartment mastermind Billy Wilder – features British actor Charles Laughton as Sir Wilfrid Robarts, a barrister recovering from a heart attack who takes on a murder case against the orders of his doctor. Starring Tyrone Power, in his final film role, as Leonard Vole – Robarts’ client accused of murdering a wealthy, older widow – and Marlene Dietrich as Vole’s wife and alibi, the film noir was released in 1957 to widespread acclaim.

…And Justice for All

Canadian director Norman Jewison’s 1979 courtroom drama …And Justice for All stars Al Pacino as Arthur Kirkland – a Baltimore lawyer forced to defend a judge charged with rape who had previously held him in contempt of court for throwing a punch at him during his client’s case hearing. Increasingly frustrated and disgusted by the corrupt legal system, Kirkland – who alongside defending the shady judge, witnesses his fellow lawyer and friend have a mental breakdown and a client commit suicide – lashes out during the judge’s trial, culminating in a blistering rant in which he rages, ‘You’re out of order! The whole trial is out of order!’

Let Him Have It

Let Him Have It was based on the true case of British teenager Derek Bentley, an intellectually disabled petty criminal hanged as an accomplice to murder of a policeman, while his younger partner in crime and the person who actually committed the murder, served just ten years in prison. The film stars ninth Doctor Who, Christopher Eccleston as the accused in his first film role. A damning indictment of capital punishment, the film’s real-life protagonist was hanged just 12 years before the death penalty was abolished in the United Kingdom and granted a full posthumous pardon in 1998.