15 Films to See Before Visiting the United States 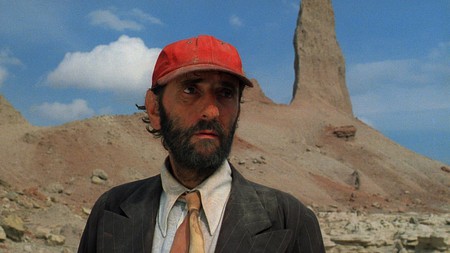 American film has always dominated the industry worldwide—so why do films that are actually about America seem such a rarity? Part of the issue might be the country’s embarrassment of cultural riches; with so many disparate communities and landscapes, the regional film tends to get overlooked. But this is the America as lived by its residents and the one seen by visitors, whether they’re touring the American southwest by car or stopping in Hawaii or Florida. Below are 15 of the most memorable and penetrating visions of America, all filmed on location for maximum realism and featuring a broad survey of often-overlooked fragments of the American story.

There’s no shortage of films capturing the desolate, nearly prehistoric beauty of Texas, but few can top Paris, Texas for moody landscape panoramas. Seen through the eyes of German filmmaker Wim Wenders, Texas is a boundless expanse of motels and billboards—and through it wanders the all-but-catatonic Travis (the great Harry Dean Stanton in a rare starring role). Nursing a secret, he’s carrying a mysterious photograph of an empty lot in a place called “Paris,” and exhibiting an existential quietude that is the perfect complement to the cinematography, which was filmed in and around Houston.

This unusually family-friendly road film from David Lynch tells the true story of how elderly, movement-impaired Alvin Straight (Richard Farnsworth) rode his John Deere tractor 240 miles from Iowa to Mount Zion, Wisconsin to visit his estranged brother (Harry Dean Stanton). Lynch filmed The Straight Story along the real Straight’s route, offering viewers an unmediated tour of the Midwest grasslands and, in the people he meets along the way, a touching cross-section of heartland Americana.

There are splashier films set in Florida, but few as ethnographic as Sunshine State, in which director John Sayles brings the same eye for a state’s cultural profile that he brought to Texas (Lone Star) and West Virginia (Matewan) to a racially diverse beachfront town on the verge of economic upheaval. Featuring a Greek chorus of golfers, Sunshine State focuses on the small-town fallout of Florida’s massive developments and captures a portion of the U.S. usually hidden behind resorts and strip malls.

Most films set in Louisiana fall back on Creole-American custom and voodoo as sensationalized set pieces, but Eve’s Bayou takes the cultural background of the bayou seriously. Produced by and starring Samuel L. Jackson as the troubled patriarch of the Batistes, a family in which “second sight” runs, Eve’s Bayou is both a coming-of-age fable and an extremely true-to-life rendering of an American black community—not to mention a depiction of voodoo that has been as carefully purged of cliché as the story has been stripped of shrill melodrama.

This George Clooney drama, concerning a Honolulu attorney struggling to take the reigns of his family after his wife falls into an irreversible coma, is another opportunity to glimpse the cultural reality behind a vacation destination. Filmed on location in Honolulu and the beaches of Kauai, The Descendants features a soundtrack of both traditional and contemporary Hawaiian music and, as a terse and earnestly ruminative drama, presents an unusual view of paradise.

Bruce Dern earned an Oscar nomination for his performance of an ornery Montana man traveling through South Dakota to Nebraska in order to claim the million-dollar sweepstakes prize he mistakenly believes himself to have won. As strong as Dern’s performance is, however, Nebraska’s real star is the stark Midwest landscape, which includes pockets of Wyoming, all filmed in poetic black-and-white.

Filmed in the winter in and around Minneapolis-Saint Paul, Fargo was initially titled “Brainerd,” which is where the majority of the film’s neo-noir plot actually unfolds—though the iconic Paul Bunyan statue was built for the film. Location is everything in this acclaimed Coen Brothers film, as local police chief Marge Gunderson (Frances McDormand) investigates the trail of destruction left by two criminals (Steve Buscemi and Peter Stormare) hired by a desperate car salesman (William H. Macy). The characters’ Minnesota accents spawned a million imitations (and an acclaimed FX television series), but Fargo remains an essential example of regional filmmaking at its best.

Carson McCullers novel, The Ballad of the Sad Café, is transposed from the American South to the Mojave Desert in this understated and offbeat cult classic. Centered on the titular truck stop (and real life roadside attraction) off Route 66, Baghdad Café follows two German tourists as they encounter other marooned lost souls—like a tattoo artist, a piano prodigy, and Jack Palance as a cowboy painter. The basis for a short-lived sitcom starring Whoopi Goldberg, Baghdad Café is that rarest of things: an entirely stationary “road movie.”

This acclaimed independent film concerns a successful Apache novelist who returns to his Arizona reservation to confront his estranged family. Like 1998’s Smoke Signals before it, Shouting Secrets confronts indigenous stereotypes and fleshes out its community with anecdotes and an emotional focus on a cast enjoying the rare respite from “token Indian” roles, including Chaske Spencer (The Twilight Saga) and Q’orianka Kilcher (The New World).

My Family tells the story of a Mexican-American family through three generations and, in the process, spotlights an astonishing cast of Hispanic actors and actresses, from Edward James Olmos and Jimmy Smits to a young Jennifer Lopez. Set in East Los Angeles, the film conjures a place and a time in both American and Mexican history while also confronting still-topical realities like citizenship and deportation. With its emphasis on immigration and cultural identity, My Family is essential viewing for anyone seeking the full story of America’s cultural makeup.

Another vision of America as seen by a European director (in this case Louis Malle), Atlantic City is an elegy for a number of things: the gangster film, the American industry city, and its star, Burt Lancaster, as an aging crook who takes up with Susan Sarandon’s casino waitress. Opening with the demolition of a Jersey Shore hotel to make way for yet another casino resort, it remains the best “gambling” movie ever made—beating out P.T. Anderson’s Hard Eight and Scorsese’s Casino—for its dynamic sense of place and depiction of the labor that goes into tourist hospitality.

Unreleased for 30 years, this American neorealist view of the African-American Watts District in Los Angeles has gone on to become a classic and a crucial tour of working class life. Killer of Sheep loosely follows a slaughterhouse worker and his family, but it is more of a mosaic of moments than it is a straightforward narrative; what emerges in the process is a beautiful, tragic, and comic inner city tone poem that is required viewing for anyone looking past Hollywood for the inner life of an American city.

This Bedford-Stuyvesant-centered tour de force—which made Spike Lee’s career and made stars of members of its ensemble cast like Martin Lawrence, Rosie Perez, and Samuel L. Jackson—is so canonized now that it’s possible to overlook just how important and controversial it was upon release. Catching Brooklyn just before gentrification began to displace its African-American community, Do the Right Thing is the story of a block, its residents, and nascent racial tensions on the hottest day of summer. It is also one of the great American movies and a must-see for anyone hoping to become more familiar with its intrinsic and frequently imperiled culture.

This teen comedy deserves re-watching not so much for its hijinks or ’80s nostalgia value, but for its function as a walking tour of Chicago, which is rendered as vividly here as the New York of Scorsese or Spike Lee. John Hughes’ students-on-the-lam hit all the highlights, from the Sears Tower to Wrigley Field, and especially the Art Institute of Chicago, where paintings from the permanent collection are cut together in a montage that sightseers have been recreating ever since.

Set and filmed in North Carolina, Junebug offers a South that is seldom deemed worthy of inclusion in film, as it lacks the usual clichéd hillbillies or creeping bougainvillea. Instead it tells the carefully-observed story of a gallery owner looking to sign a reclusive outsider artist and dealing with her husband’s set-in-their-ways family, particularly his bitter younger brother Johnny (Ben McKenzie) and Johnny’s pregnant young wife Ashley (Amy Adams in her breakout performance). Neither overly romanticized or exploitative, it is a perfect portrait of American “normality” at its most revealing.