15 Cold War-Era Protest Songs That Made A Difference 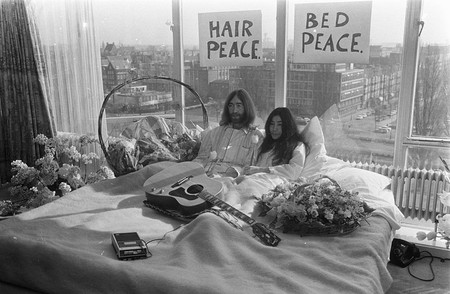 John Lennon and Yoko Ono on the first day of their Bed-In for Peace in the Amsterdam Hilton Hotel (1969). | Dutch National Archive

While we may reasonably claim that protest chants have existed for as long as, well, protests have (Ho, Ho, Ho Chi Minh! The NLF is gonna win!), bona-fide protest songs have a much murkier history. Not until the generalization of recorded music and the lifting of freedom of speech restrictions around the 20th century (in Europe and the United States, at least) did popular artists explicitly politicize. It was during the Cold War, in particular, that the form became a proving ground for concerned musicians on both sides of the Atlantic, to the extent that no important socio-political movement could do without its fair share of fantastic music. We compiled 15 English-language songs that marked this time.

Though this song’s origins reportedly go as far back as the late 18th century (it appears to have been adapted from a Roman Catholic hymn first published in 1792!), the story goes that it was first heard at a union strike in Charleston, North Carolina in 1945. It was there, anyway, that Zilphia Horton – a labor organizer and musician – first wrote it down, before passing it on to her folk-singing friend Pete Seeger. Renamed ‘We Shall Overcome’, it eventually became a staple of his Civil Rights activism in the early 1960s, and quickly gained its place as the Movement’s defining anthem, more popular, even, than Sam Cooke’s iconic ‘A Change Is Gonna Come’ (1964).

Further listens: (A Change Is Gonna Come; We Shall Not Be Moved)

Though she had been a clear supporter of the Civil Rights Movement throughout her early career, it wasn’t until 1964 that Nina Simone became one of its figureheads. Banned in several Southern States (on the excuse that the title contained ‘goddam’), and performed at the end of the Selma to Montgomery marches (as well as several other demonstrations), Simone’s first protest song was a response to two hate crimes that rocked 1963: the murder of Medgar Evers, an activist who worked against segregation at the University of Mississippi, and the bombing of the 16th Street Baptist Church in Alabama.

Further listens: (Strange Fruit; To Be Young, Gifted and Black)

Led by the influential Curtis Mayfield, The Impressions were one of the first soul acts to overtly associate themselves with the Civil Rights Movement. If the group had already released such anthems as ‘Keep on Pushing’ (1964) and ‘People Get Ready’ (1965), this particular song is notable for being one of the first to explicitly engage with racial politics, and especially black pride. It was quickly taken in by the Movement and sung during demonstrations, paving the way for increased social consciousness in soul and funk music. Mayfield himself continued to pen political songs throughout his career, achieving greater fame in the early 1970s with a series of fantastic LPs.

Further listens: (People Get Ready; Move on Up)

No song marked the hippie movement quite like ‘The Fish Cheer’ (renamed, for the space of a legendary performance at Woodstock, as ‘The Fuck Cheer’) did. One of the first modern anti-war songs, it was released during the escalation of hostilities in Vietnam, right as the counter-culture movement was gaining momentum. A pure product of the 1960s San Francisco music scene, it was written as a traditional ragtime, with the notable addition of dark, satirical lyrics. The chorus, in particular, was found to be especially engaging: “And it’s one, two, three / What are we fighting for? / Don’t ask me, I don’t give a damn / Next stop is Vietnam!”

The defining anthem of the anti Vietnam-war movement, it was written by John Lennon and Yoko Ono (though credited as Lennon-McCartney) while the two were doing their ‘Bed-in’ honeymoon in Montreal – that is, staying in bed for a week as a stunt to promote peace. Recorded on four microphones, with a host of journalists and celebrities present in the room, it quickly became a staple of demonstrations across the country, most notably sung by half a million people during the Vietnam Moratorium March on Washington later that year (and led by none other than Pete Seeger).

While ‘Ohio’ (1970) – Neil Young’s response to the Kent State Massacre – is now remembered as a counter-culture anthem, ‘Southern Man’ is undoubtedly the legendary Canadian songwriter’s most accomplished protest song. A courageous, virulent attack on Southern racism and violence, it manages both to tell the story of segregation and make a case for reparations. Southern rock band Lynyrd Skynyrd recorded their hugely successful ‘Sweet Home Alabama’ (1974) as a response to it – as well as Young’s later ‘Alabama’ (1972) – a single which is still controversially adored in the southern states.

Widely held as one of the greatest albums of all time, What’s Going On is a landmark LP in the history of soul music. Sung from the point of view of a Vietnam veteran disgusted by the country he’s returned to, its immense success allowed others – from Sly and the Family Stone to Curtis Mayfield – to become politically engaged without fear of record companies. The song itself is an unlikely story: ‘What’s Going On’ became Motown’s fastest selling single despite having been released without the approval of label founder Berry Gordy, who absolutely hated it. Upon hearing the track was a hit, Gordy personally visited Gaye to apologize and ask him to record an album to go along with it. We’re all rather thankful Marvin complied.

It arrived a few years later than the Civil Rights and Anti-War movements, but Women’s Liberation finally received its own anthem in 1972 – and what a success it was! Released right as counter-culture was starting to decline, ‘I Am Woman’ ended up empowering a whole movement, and selling more than a million copies. The story of its slow climb is one that bears repeating: Initially unknown, the single gained traction after radio stations across the US began to receive calls by women requesting the track be played. Australian singer Helen Reddy became a star over the space of a few months, and dominated pop music for the rest of the decade.

Of all the artists mentioned here, none have had their output associated with protest quite as much as Bob Dylan. While songs like ‘Blowin’ in the Wind’ (1963) and ‘The Times They Are a-Changin’ (1964) became anthems for the movements that defined the 1960s, his most outspoken song came a little later. ‘Hurricane’ recounts the story of professional boxer Rubin “Hurricane” Carter, who was wrongfully convicted of murder in 1966 by a racially-motivated false trial. The song helped raise support for Carter, who was eventually released after spending nearly twenty years in prison.

If Fela Kuti, legendary inventor of Afrobeat, had a difficult relationship with authorities (he was reportedly arrested more than 200 times), it was Zombie that caused him the greatest pain. A scathing attack on the Nigerian military (at a time when the country was ruled by a military junta), the album guaranteed massive retaliation – a thousand soldiers descended upon the commune where he lived and razed it to the ground, beating Kuti and murdering his mother. Undeterred, he responded by personally delivering her coffin to the general in charge, and recorded his next album (the aptly-named Coffin For Head of State) right after his release from prison.

It’s no secret that politics and music (and religion, for that matter) weren’t exactly separate matters for Bob Marley: from the criticism of corrupt Kingston police in ‘Burnin’ and Lootin’ (1973) to the sheer universality of ‘Redemption Song’ (1980), Tuff Gong produced his fair share of political anthems. Yet none are quite as spirited as ‘War’. A powerful anti-apartheid reggae, its lyrics were taken almost in their entirety from a speech Ethiopian emperor Haile Selassie gave at the UN in 1963. Needless to say, it’s quite a statement: “Until the philosophy which holds one race superior and another inferior is finally and permanently discredited and abandoned / Everywhere is war / Me say war.”

“God save the Queen / the fascist regime!” So were the words with which the Sex Pistols celebrated Elizabeth II’s Silver Jubilee, a line still remarkably progressive some forty years later (we just don’t see anyone insulting Her Majesty and making a hit out of it these days, now do we?). An attack on the monarchy and the abysmal elitism then wrecking the country, the song proved rather controversial at the time, and was most notably refused by both the BBC and commercial broadcasting. It nonetheless proved to be a huge success, foreshadowing the increased politicization of British music that would define the scene over the next few years.

Further listens: (Anarchy in the UK; Holidays in the Sun)

The Clash, and frontman Joe Strummer in particular, were easily the most political band to have come out of punk. They rejected nihilism – unlike many of their peers – and embraced a slew of left-wing ideals (a stance which wasn’t just posturing, as they fought to keep their music, shows and merchandise cheap enough for all… musicians today could learn a thing or two from their example!). Perhaps the most iconic of their political pieces is ‘Guns of Brixton’, an attack on police brutality and social disaffection in South London, whose taunting refrain (“But you’ll have to answer to / Oh, the guns of Brixton”) prefigured the 1980s Brixton riots.

No song on this list was quite as misunderstood when it first came out as this Springsteen classic. Released right as the 1984 presidential election was heating up, it was initially thought to be a patriotic anthem (no doubt by people who only listened to the chorus) and tried to be recuperated by the two candidates – who were politely rebuffed. Yet the song was nothing of the sort: its lyrics lament the treatment of the American working class, and attack the neglect veterans found themselves in upon their return from Vietnam.

Why did South African exile and veteran jazz trumpeter Hugh Masekela suddenly decide, in 1986, to write a political song? Well, he had a very special fan. Nelson Mandela, imprisoned since 1962, loved his music, and managed to sneak a birthday letter out to the musician in 1985. The leader of the anti-apartheid movement, an inspiration for oppressed black South Africa, inadvertently reminded Masekela that he could contribute something himself. The result? An anthem for the movement that ended the country’s racist regime just a few years later. Not bad.