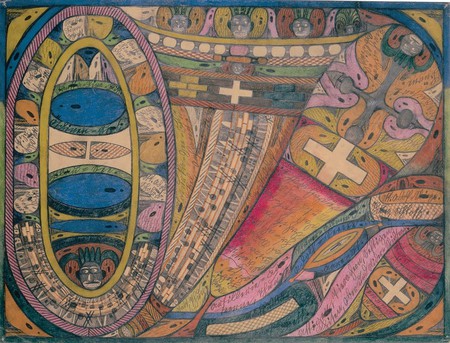 Outsider Art, a term by art critic Roger Cardinal, describes art that exists outside of ‘typical’ culture; in the past, it has included artists who may have suffered from mental illness. However, over the years, the term has extended to art produced by those artists with no formal training, also acting as a synonym for Folk Art and art brut. We profile 12 artists who prove that you don’t need to go to art school to create something notable.

An Italian-American man, Simon Rodia moved to the United States in 1895, and over the years, moved around working odd jobs. He settled for a while in Oakland with his wife and children; however, they eventually divorced, and after some pit stops, he ended up in Watts where he began his only art piece, Nuestro Pueblo, better known as Watts Towers. While this massive project, consisting of towers and sculptures (17 in total), was never fully completed, Rodia worked on his masterpiece for 33 years, utilizing found objects, metal items and steel rebar. He did all the work by himself with no fancy tools or formal art training. 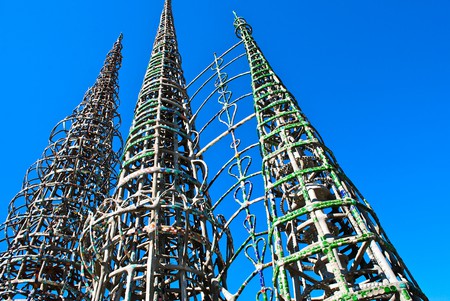 Known as one of the first outsider artists, Adolf Wölfli was born in Bern, Switzerland and had a heartbreaking upbringing; his father was an alcoholic who abandoned the family, and Wölfli became an orphan at a young age (between eight and ten depending on the source) when his mother died. He was in jail for a brief time and later spent most of his adult life in a psychiatric hospital where he created highly detailed, intricate drawings, many of which were made with colorful pencils. These drawings, along with text, collages, and musical compositions, turned into an oeuvre of thousands of pages. To see his art in person, visit the Museum of Fine Arts in Bern.

A British outsider artist, Madge Gill only started creating art after a series of dramatic events. It was after having her only daughter die at birth and Madge herself coming close to death – losing her left eye – that she began producing black-and-white drawings. Madge was known as a mediumistic artist – her aunt had introduced her to Spiritualism in the early 1900s – as she had a spirit guide, Myrninerest, who aided her through her art after she recovered. Her drawings depict women outfitted in fancy garb. She also worked in other media throughout her life including writing, knitting, and weaving. During her lifetime, she rarely showed her work because, according to sources, she believed they belonged to her spirit guide; therefore, most of the world was introduced to her work after her death. Explore some of her work here.

In 1943 in Columbus, Ohio, Judith Scott, along with her twin, Joyce, entered the world. Judith was born with Down’s Syndrome and lost her hearing as a baby – although it wasn’t diagnosed until she was about seven years old. She was sent away at the age of seven to an institution, having no contact with her family for 35 years until her sister searched for her and became her guardian. Judith moved to California and enrolled at the Creative Art Center in Oakland – a center that provides studio space for artists with disabilities. Most media didn’t interest Judith; that is until she attended a fiber art class. Judith began to make sculptures, both small and large, using whatever material she could find, creating over 200 works throughout her life. Her works can be found in major museums like the MoMA in NYC and private collections around the world.

Born in Chicago in 1892, Henry Darger was a quiet man who worked as a custodian at a hospital. Every day he went to work, and when he returned home at night, he worked on a manuscript known as The Story of the Vivian Girls, in What is Known as the Realms of the Unreal of the Glandeco-Angelinian War Storm, Caused by the Child Slave Rebellion, better known as In the Realms of the Unreal. Unearthed after his death in 1973, this incredible work of art contained over 15,000 pages that included colorful drawings and watercolor paintings depicting everything from charming interiors and landscapes with mixed-gendered children to disturbing images of torture and death. You can discover his work in museums like the American Folk Museum in NYC and the Intuit: The Center for Intuitive and Outsider Art in Chicago. 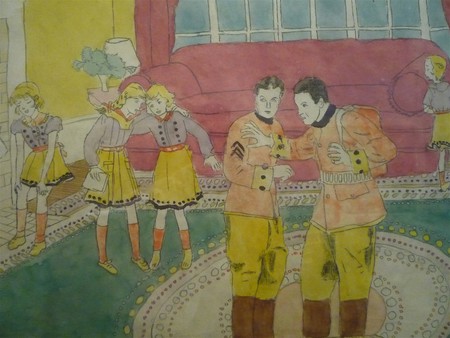 Joseph Yoakum was born in Missouri in 1889 – or at least, that is what records show, as Yoakum said he was born in Arizona. He was of African-American, French-American and Native American descent and joined the Great Wallace Circus when he was just nine years of age. He was part of several other circuses as a young man, including the Ringling Brothers, before being drafted into the army. Specializing in landscapes, this self-taught artist created many drawings and paintings, all free-flowing, organic pieces often utilizing vibrant colors. As he started producing art later in life, recognition came toward the end of his life, including a one-man exhibition at the Whitney Museum in New York City. 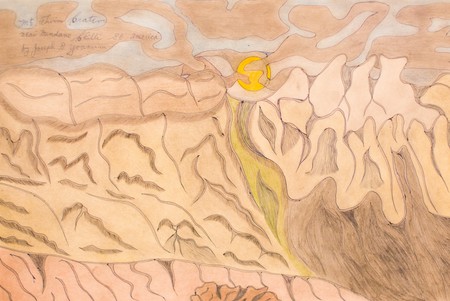 Helen Martins was a South African artist known for her Owl House. Born in 1897, Martins was a teacher for a period of time, got married and later divorced when her husband left her for another woman. Shortly thereafter, she returned to her hometown, Nieu Bethesda, where she cared for her parents until they passed, at which point she began to shut herself off from the world. Her creative juices started flowing, and she started to transform her home and garden with colorful pieces of glass and mirrors and hundreds of cement sculptures, turning the spaces into eclectic works of art. Today, the Owl House, as it is known, is a museum and national monument. 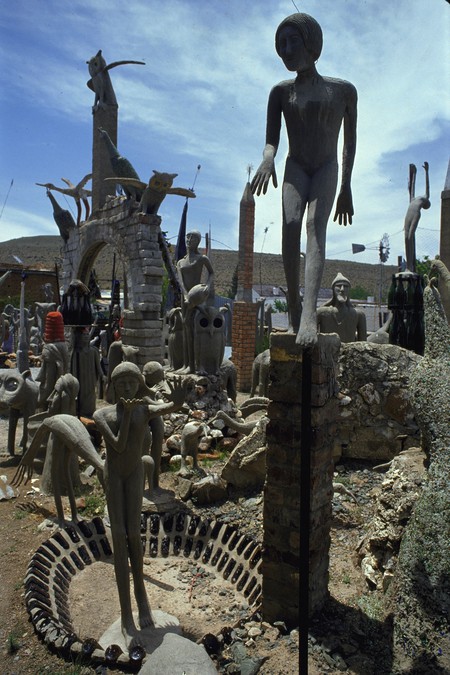 Born in what is present-day Lithuania, Friedrich Schröder-Sonnenstern is one of the most important outsider artists in many people’s eyes. As a child, he was in trouble often and spent some time in reform schools and an asylum, where he was diagnosed with schizophrenia. After being released, he became a quack doctor known as Professor Dr. Eliot Gnass von Sonnenstern. His life was certainly colorful, and his works of art, which he started producing in his late 50s were equally fantastical. His works have a surrealistic quality to them with half-human, half-monster creatures, sometimes with exaggerated features. Indeed, his works were showcased in Surrealist exhibitions in Europe and the USA. Find some of his works here.

Anna Zemánková was born in the present-day Czech Republic in 1908 and enjoyed making art as a child. Her father, however, did not see it as a proper profession, so when she got older, Anna went to school to become a dental technician. Even though she had a career, she never turned her back on art, creating her floral and botanical pieces every morning before going to work. In the beginning, she mostly made drawings, but as time went on, she experimented more and more, such as combining textile techniques and collage into her pieces, which she called ‘bricolage.’ During her lifetime, she did sell some of her work and was included in an exhibition of outsider art in London.

Lee Godie was a fascinating and colorful women who lived on the streets of Chicago for three decades. No one knows how she became homeless, but one thing is for sure, she lived life her way. Often described as ‘unpredictable,’ Lee described herself as a ‘French Impressionist,’ wore eclectic clothing and created intriguing art – some of which she made while sitting on the steps of the Art Institute of Chicago. Also, she would not sell her art to just anyone; she only sold it to people she liked. She made drawings and paintings but is probably best known for her self-portraits. Her self-portraits were black-and-white photographs she took in a photo booth and then adorned with paint, pencil and even make-up. Today, her work is found in private collections and famed institutions like the Art Institute of Chicago.

Born in Wisconsin in 1910, Eugene Von Bruenchenhein was a self-taught artist who worked in a variety of media, including but not limited to photography, drawing and sculpture. Over the past few decades, his work has had a spotlight shone on it, with his works included in numerous group shows in the USA and abroad. Some of his signature works include photographs he took of his wife, reminiscent of pin-up girls, and his vibrant paintings that have an almost psychedelic quality to them with different forms melding into each other. He also created sculptures out of discarded chicken and turkey bones. As with most of the artists on this list, Von Bruenchenhein’s work was unrecognized for most of his life.

Grandma Moses, whose real name was Anna Mary Robertson Moses, never went to art school and didn’t even begin to produce her beloved artworks until late in life. Born in 1860 in upstate New York, Grandma Moses started painting in her mid- to late 70s and was first recognized at the age of 80. A folk artist, her paintings are noted for their simple yet picturesque landscapes of farm life and the countryside, often in bright colors. Grandma Moses lived an incredibly long life of 101 years, creating over 1,500 paintings in three decades, some of which are located in art museums, private collections and even the White House. 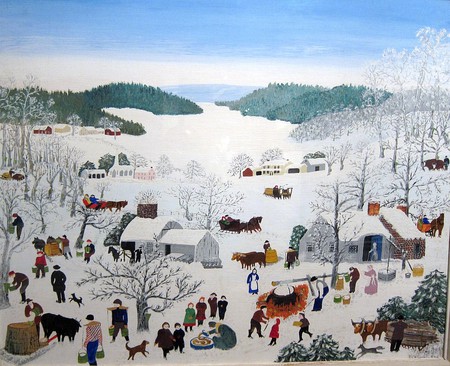 Grandma Moses, Sugaring Off, 1945 | © Bosc d’Anjou/Flickr
Give us feedback