Astonishing Planetariums And Where To Find Them

L'Hemisferic | © Diego Delso/WikiCommons
There is no better place to learn about the beauty and majesty of the universe around us than at a planetarium. These astronomical theaters are more than buildings: they hold whole galaxies, and they take us out of light-polluted cities on adventures through space to learn about black holes, meteors, and more. The next time you have a hankering to explore the night sky, visit one of the world’s most extraordinary planetariums.

Museum
Nagoya City Science Museum | © 名古屋太郎/ WikiCommons
Nagoya City Science Museum is home to the biggest planetarium in the world: the massive metal dome has a diameter of 35 meters and houses 350 seats under its huge dome screen. Sit back in the reclining seats to take a look at the thousands of stars designed to mirror the night sky, and watch amazing astronomical events like eclipses and meteors up close. The high-quality sound system adds amazing surround sound to your travels through space.
More Info
Open In Google Maps
1 17, 2-chōme, Sakae, Naka-ku Nagoya, Aichi, 460-0008, Japan
+81522014486
View menu
Visit website
Visit Facebook page
Send an Email
Give us feedback

At L’Hemisfèric, you’ll be able to experience epic proportions of beauty even before you enter the planetarium. The planetarium was designed to be the centerpiece of the City of the Arts and Sciences center for culture and science, a complex that also features an aquarium and landscaped garden. Reminiscent of a giant eye, the building’s transparent ‘eyelid’ opens and closes over the concrete ‘eyeball’ in the center, and a pool of water surrounds the whole feature. There is an IMAX Theater situated in the ‘eyeball.’ The planetarium is known as the ‘eye of knowledge,’ and there you can watch 3D displays that transport you into the depths of space on the 900-meter concave screen.

Museum
The Adler Planetarium offers a mix of exhibits, shows and events, with something for everyone | © dov makabaw / Alamy Stock Photo
Book Now
The Adler Planetarium is located right on the water of Lake Michigan with an amazing view of the Chicago skyline. Adler Planetarium was the first planetarium in the western hemisphere. Today, the structure is home to three theaters – the Grainger Sky Theater (the largest and most technologically advanced), the Definiti Theater, and the Samuel C. Johnson Family Star Theater (an HD, 3D theater) – with new projectors and sound systems that hugely enhance visitors’ experiences. Aside from watching the spectacular featured shows, you’ll be able to view several special exhibits and an observatory.
More Info
Open In Google Maps
1300 South Lake Shore Drive, Near South Side, Chicago, Illinois, 60605, USA
+13129227827
View menu
Visit website
Visit Facebook page
Send an Email
Give us feedback

India’s iconic Saturn-shaped planetarium is complete with five rings and a 21-meter-diameter spherical theater space. The building rests on a raised platform and is surrounded by stunning fountains. Inside the planetarium, guests visit a space gallery filled with information about Indian satellites on the ground floor. The main auditorium has a diameter of 15 meters and is where guests can watch video projections on topics like the Chandrayaan mission to the moon. Most shows are presented in Hindi, but some are available in English.

The Hayden Planetarium is part of the American Museum of Natural History in New York City. Here you’ll see daily displays in the two sections of the spherical building: the Star Theater, where you can watch tours of the solar system, and the Big Bang Theater, where you can watch videos exploring the birth of the universe. Neil deGrasse Tyson, famous astrophysicist and host of the documentary series ‘Cosmos,’ is the planetarium’s director. 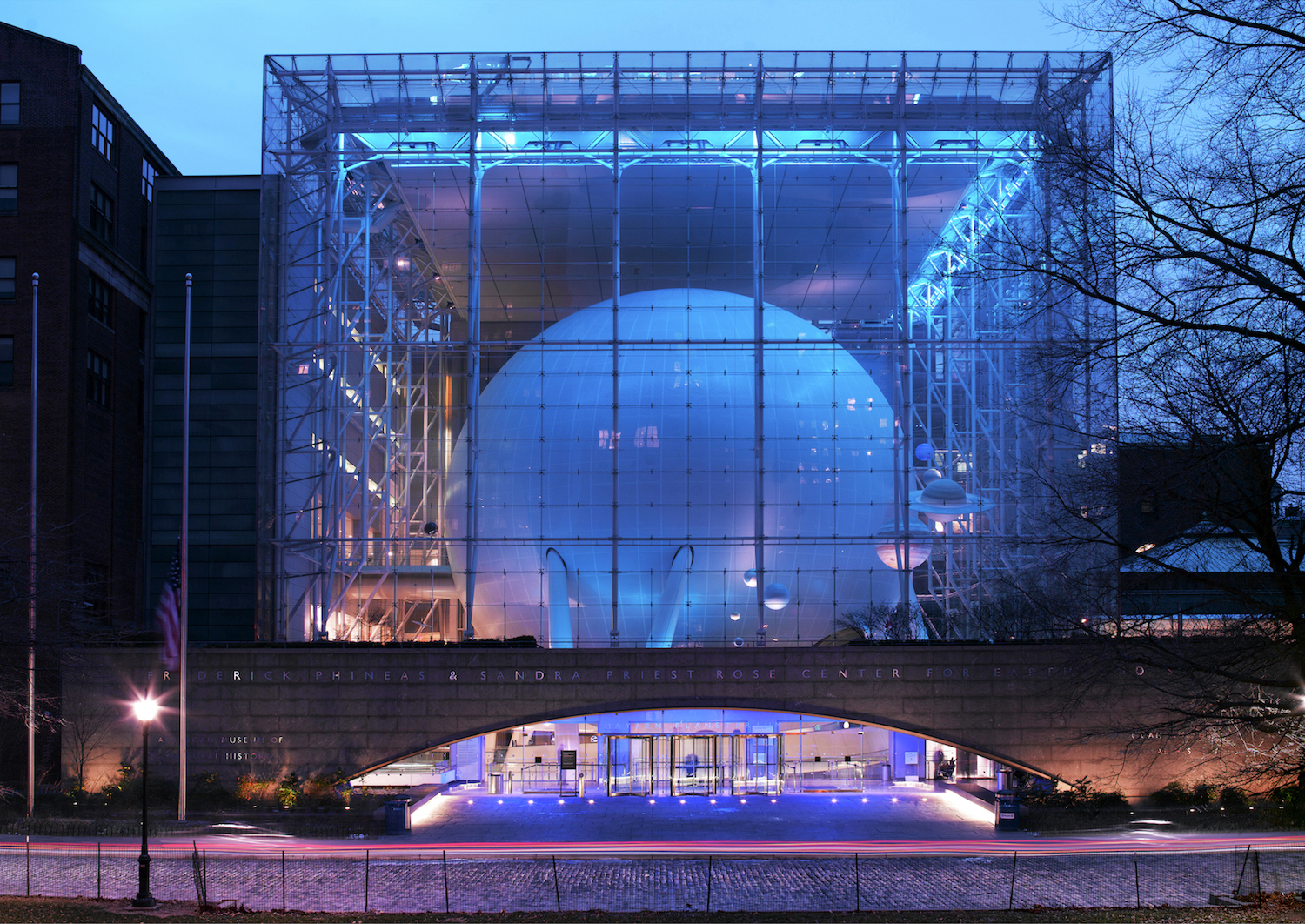 The Burke Baker Planetarium, located in the Houston Museum of Natural Science, has the SkySkan DigitalSky star field projector, the most advanced simulator in the world. The domed screen will give you an authentic view of space so that you can immerse yourself in the high-resolution solar videos. If that isn’t incentive enough, the dome theater here is the place where NASA trains their space shuttle astronauts to identify star fields. 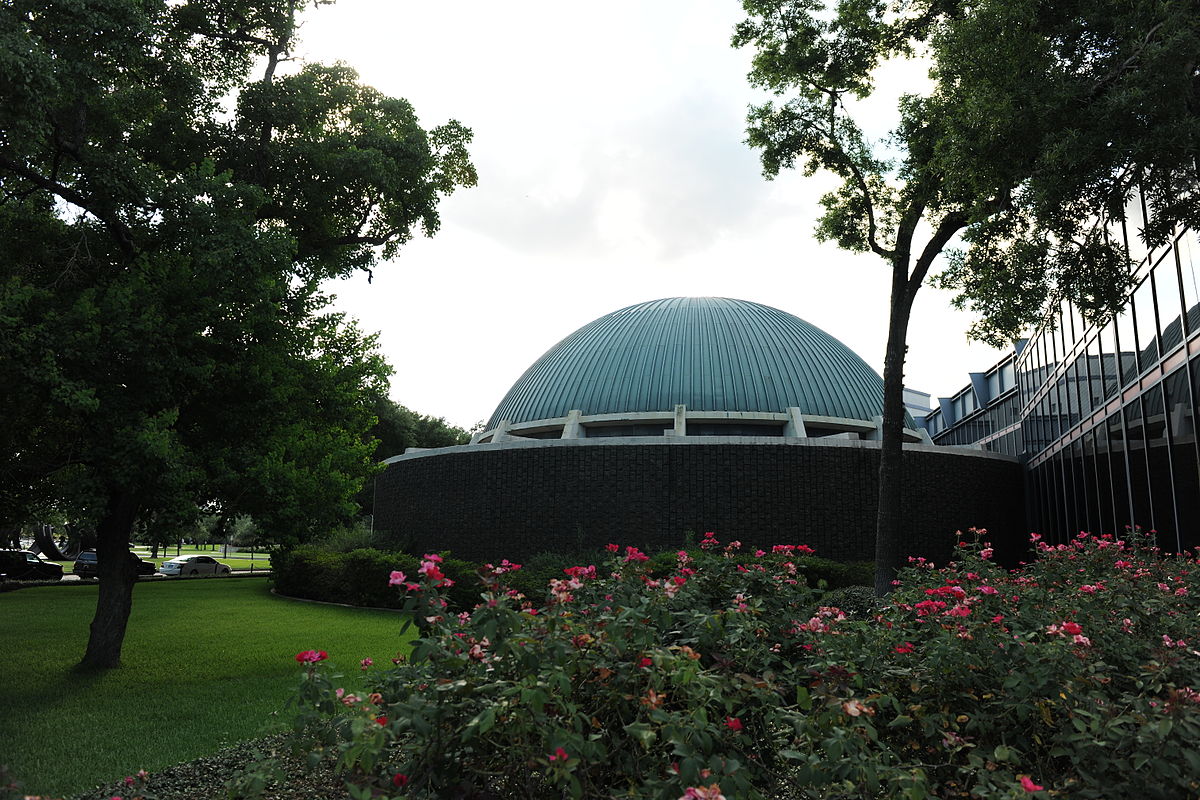 Located in the well-known Griffith Observatory in Griffith Park, this planetarium has extraordinary views before you even go inside. The planetarium is home to the Zeiss star projector, a high-quality aluminum dome, and a fantastic sound system. The 75-foot dome is one of the largest and most advanced in the world, and a live storyteller presents each show to the 290-seat theater. Grab a seat to view the unique shows and see the night sky at any moment in history. Be sure to visit the observatory afterward.

This museum houses an observatory and exhibition space along with its Planetarium Star Theater. The domed screen offers viewing experiences on topics like black holes, dark matter, traveling the solar system, and ‘The Sky Tonight,’ which features a clear view of what will be visible in the Vancouver sky every night. The unique roof of the space center was designed to look like the hats of the Haida people, but many have interpreted it as a spaceship. Either way, it has become one of the most recognized buildings in Vancouver. 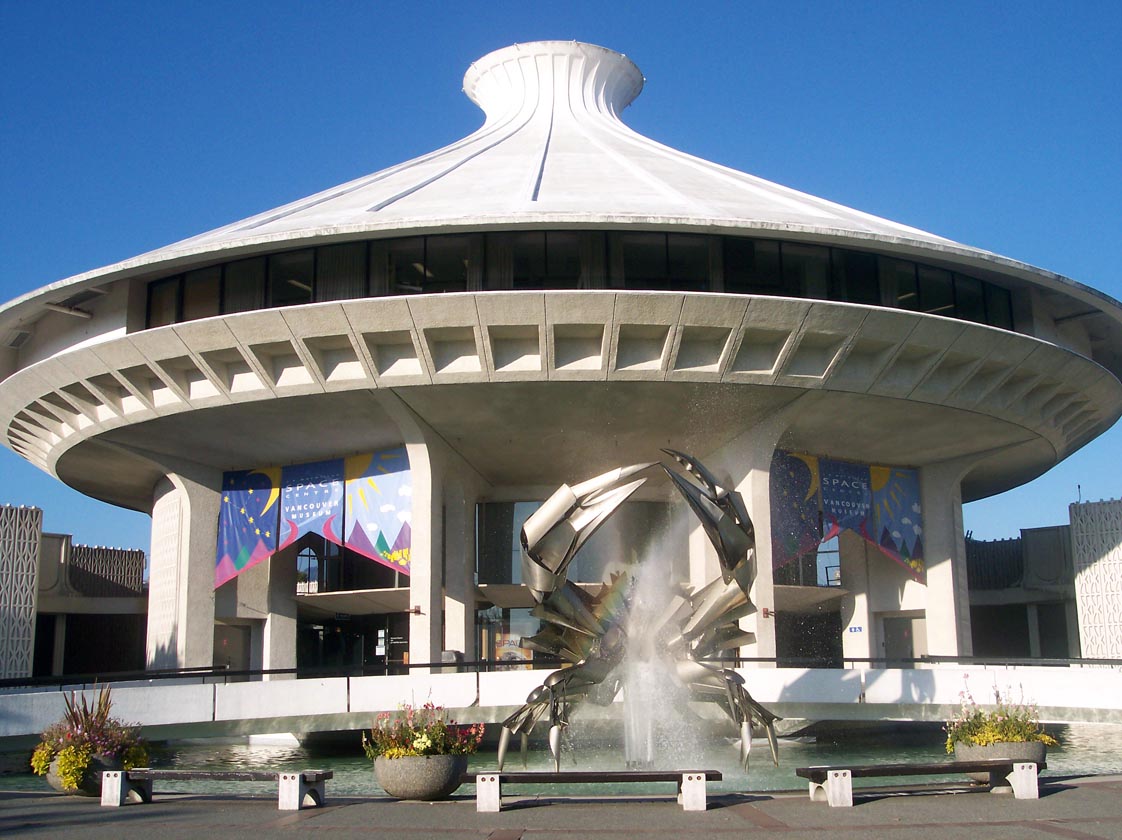 The Albert Einstein Planetarium is part of the Smithsonian National Air and Space Museum, one of the top science museums in the world. The planetarium’s state-of-the-art Sky Vision Dual projection system creates a unique flying experience for viewers. Choose from an array of different daily shows, all around 25 minutes long. In the Phoebe Waterman Haas public observatory you can see what the daytime sky has to offer through hands-on and interactive activities, and in the main museum you’ll find flight simulators and more. 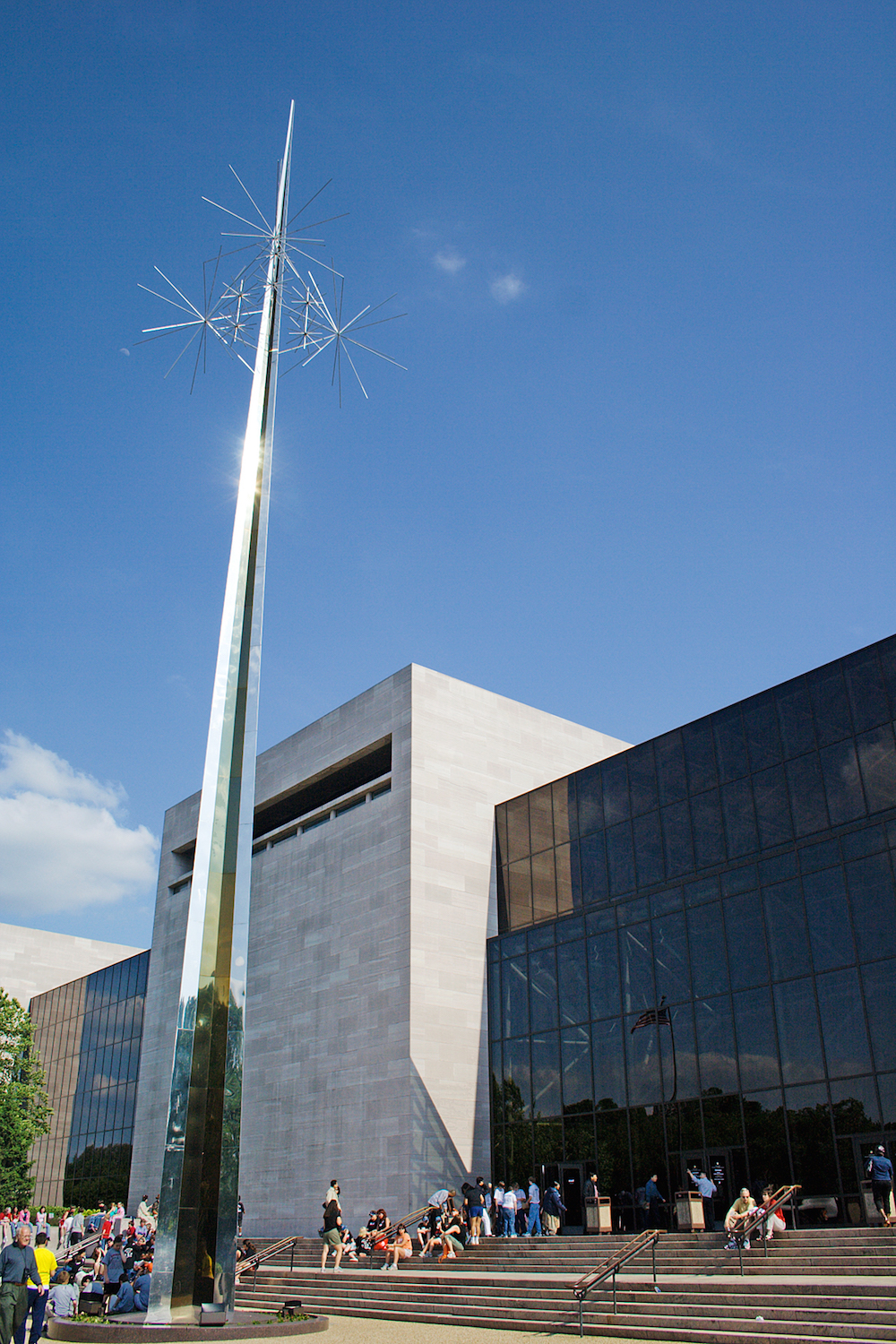 The Galileo Galilei Planetarium is located in Buenos Aires’ Parque Tres de Febrero. The planetarium opened in 1968 and juts out of the park to resemble a spacecraft with its 20-meter-diameter dome covered in aluminum. Inside, there are 360 seats under the dome screen that play regular showings of space-themed documentaries. Don’t miss the space rock displayed outside the front door of the planetarium and the metallic meteorite in the entrance terrace. 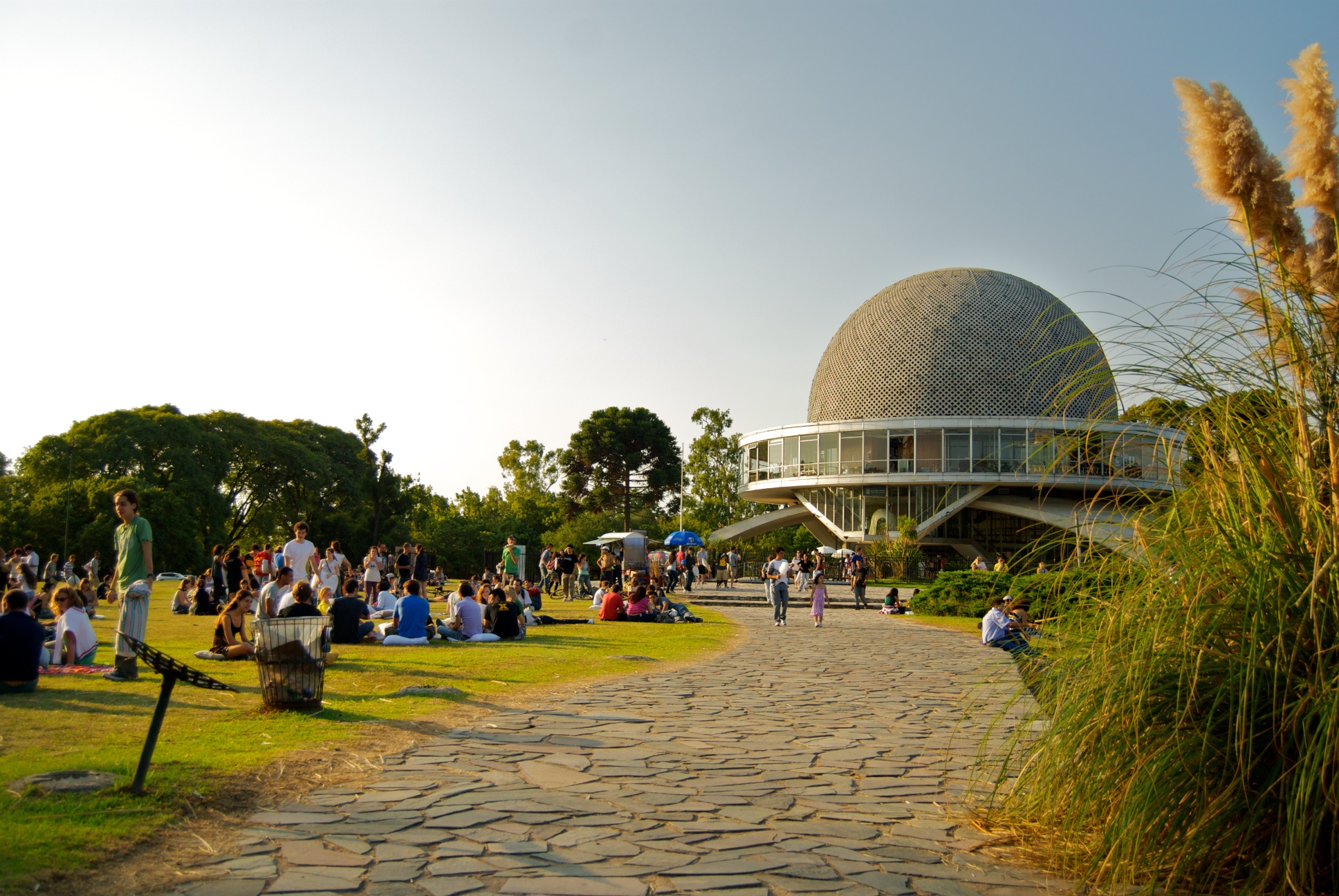 Museum, Park, Theater
Rediscover the universe at the Peter Harrison Planetarium | © Adina Tovy / Robertharding / REX
The Peter Harrison Planetarium is part of the National Maritime Museum in Greenwich Park. It is located inside a unique 45-ton bronze truncated cone tilted at 51.5 degrees, the same degree as the latitude of Greenwich, where the observatory is located. The dome theater seats 120 people who will be transported to space to explore distant galaxies or even what’s in the sky above London that night. Don’t miss the additional fantastic space explorations in the nearby Royal Observatory.
More Info
Open In Google Maps
Blackheath Avenue, Greenwich, London, England, SE10 8XJ, United Kingdom
+442083126608
View menu
Visit website
Visit Facebook page
Send an Email
Give us feedback

The Morrison Planetarium is part of the California Academy of Sciences, and it is the largest all-digital planetarium in the world. The 75-foot dome is located in Golden Gate Park, a popular San Francisco destination. The planetarium has an authentic representation of the night sky, meaning every star you see in the Morrison Planetarium mirrors a real-world star. The dome is tilted 30 degrees to reflect the tilt of planet Earth, and its frame seems to disappear when the show starts, creating a seamless viewing experience. Learn about asteroids, Earth-like planets, and more during your visit.