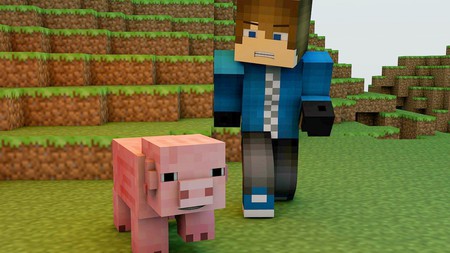 With the infinite possibilities a video game has to offer, some stories offer more weird concepts than others. From guiding a flower petal as it flies through the air, to solving a mystery with a teddy bear—these 11 unusual video games will take you to places you’ll never forget.

Burly Men at Sea follows three large, bearded men who decide to abandon ordinary life to seek out adventure. Acting as the storyteller, the player guides the trio as they travel through 20th-century Scandinavia, encountering various creatures from folklore on the way. Simplistic in its visual style, Burly Men at Sea offers a variety of narrative endings, making it great for repeat play-throughs, to guide the group of comedic, unlikely heroes.

After Stanley’s computer screen goes blank, he leaves his office at the behest of a mysterious voice to explore the building where he works, only to find it completely empty. As the player begins to explore the office, the narrator suggests the best route Stanley should take. Should the player choose to ignore the voice’s suggestion, it quickly tries its best to send you back onto the right path. With over fifteen different possible endings and innumerable ways to test the narrator’s patience, this game manages to be both comedic and uncomfortable.

Set entirely inside a smart phone, A Normal Lost Phone explores the details and secrets people hide inside their cell phones. Players act as the person who has discovered the smart phone and must work through puzzles to learn more about the cell phone owner’s life. Available as both a game for actual smart phones and for computers, A Normal Lost Phone tells a meta-story about the lives people hide inside their devices.

With its focus on creating positive feelings for the player, Flower is a beautiful and mesmerizing video game about the dreamworld of a flower. Players select a flower pot on a windowsill and are transported into the dream, where they travel through the wind as a petal. As the game progresses with each new flowers’ dream, more and more of the world begins to come to life until the player reaches the final destination—an old, decaying city in need of help.

Stuck on an abandoned spaceship, players in Event[0] must befriend a computer to try and journey home to Earth. Players type whatever they wish into the computer, called Kaizen, and it answers depending on what they’ve entered, responding to the player with statements like, “I’m not in the mood to answer you,” or “How typical of you, human being.” As the game progresses, the player and Kaizen must find a way home, only succeeding when they’ve developed a close relationship between the two of them.

Set in the fictional country of Arstotzka, players in Papers, Please work as an immigration officer, reviewing paperwork for immigrants and returning citizens. With each day, the list of rules and restrictions become longer and more severe, making it harder and harder for the player to process more people, which in turn leads to the officer earning less money to spend on food and bills. As a result, the player has to figure out how process more people more quickly, without breaking the rules—or at least without getting caught.

Set on a beautiful, empty beach Dear Esther involves nothing more than a player wandering aimlessly around the shore and the nearby terrain. As the player walks around, memories and fragments of messages play across the screen, hinting at a mystery that can only be uncovered with more exploration. With nothing more to do than enjoy the scenery, Dear Esther tells a haunting ghost story through simple, mindless wandering.

Reminiscent of early video games, with its pixelated graphics, Undertale is a role-playing game about a child dropped into a world called the Underground, a land where all monsters have been banished to. From there the child must escape, battling said monsters on her journey home. What makes this game so unusual and separate from other role-playing games is its strange combat. At one point the player encounters a reindeer with Christmas lights on its antlers. Players can choose to attack it, decorate the reindeer further or remove the decorations altogether, but whatever they choose to do, their choices will have consequences once they reach the end of their journey.

Bear With Me is a black-and-white, point-and-click, noir video game that follows a young girl, Amber, and her teddy bear—Ted E. Bear—as they search for her missing brother. It offers a unique twist on the typical mystery game, with its charming 2D graphics and Ted E. Bear’s sarcastic wit. As the game progresses, Amber learns that an enigmatic “red man” has been following them around, leaving red objects behind in the otherwise black-and-white world. With its episodic structure, this game is great in small doses, leaving players wanting more and leaving them to guess at what might happen next, all the while following around a retired old teddy bear.

After waking up from a passionate night with a stranger, players of the game One Night Stand must figure out who exactly is this person next to them in bed. Created with hand-drawn animations, this game explores an uncomfortable interaction by forcing the player to explore the stranger’s home to figure out what happened the night before. The more the player prods the stranger or snoops through the house, the more likely they are to get kicked out before finding out the truth.

Thomas-AT-23-6-12 is a robot who becomes self-aware and begins to explore his 2D world. Envisioning himself as a red rectangle, Thomas navigates this new world where many other artificially intelligent beings have re-imagined themselves as different shapes as well, after becoming self-aware. Each shape has different abilities that the player can use to get through the various puzzles in the game, the narrator giving personalities and backstories to each different shape.