11 Of Bob Dylan's Most Scathing Lyrics 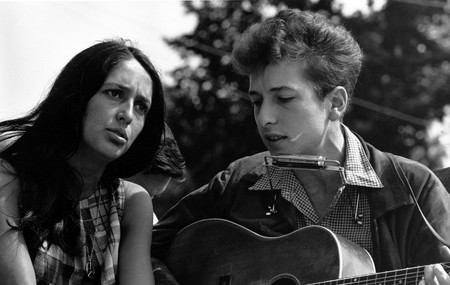 On Thursday, Oct. 13, it was announced that singer-songwriter Bob Dylan was awarded the 2016 Nobel Prize in Literature. A polarizing selection — some people support his selection, some people consider it a terrible mistake — the Swedish Academy defended Dylan’s election “for having created new poetic expressions within the great American song tradition.”

“Dylan has recorded a large number of albums revolving around topics like the social conditions of man, religion, politics and love. The lyrics have continuously been published in new editions, under the title ‘Lyrics.’ As an artist, he is strikingly versatile; he has been active as painter, actor and scriptwriter.” the Swedish Academy stated in a biographical note accompanying the announcement.

Whether you believe Dylan deserved the Nobel Prize or not, it is undeniable that his music and lyrics have forever impacted artistry and society. While Dylan has gone through many phases in his long career, he is probably best-known for his protest albums, largely written during the ’60s, and their scathing, venomous lyrics. Here, we examine 11 lines where Dylan really raised hell because we all needed to hear it.

How can the life of such a man / Be in the palm of some fool’s hand? / To see him obviously framed / Couldn’t help but make me feel ashamed / To live in a land / Where justice is a game

One of Dylan’s most famous tracks, “Hurricane” details the wrongful conviction and nearly-20-year imprisonment of former middleweight boxer Robin “Hurricane” Carter and John Artis in a triple murder case. Released in 1975, Dylan called out the justice system for what it was: a racist “game.”

Released on 1963’s The Freewheelin’ Bob Dylan, Dylan doesn’t mince words in his criticism of the Cold War arms race. While every lyric of this song is seeping with anger, and worthy of recognition on this list, it is the eighth and final verse that sees him at his most cold-blooded. After calling out those who willingly send others to the front lines while hiding in their mansions, he wishes death upon the “masters of war,” an unprecedented statement for Dylan.

While “Maggie’s Farm” could represent a number of different things — racism, state oppression, the music industry’s capitalist exploitation — it is, at its core, a protest of a protest. Calling out the 1960s folk protest movement, Dylan acknowledges that such organizations often breed conformity, and, therefore, rejection to individuality, and he will no longer play their “slave.” When Dylan performed this song at the 1965 Newport Folk Festival as part of his electric set, he was booed off of the stage.

“The Man In The Long Black Coat”

Preacher was a-talkin’, there’s a sermon he gave / He said every man’s conscience is vile and depraved / You cannot depend on it to be your guide / When it’s you who must keep it satisfied

We are often told to “follow our gut,” or to trust our instincts, but for Dylan, it’s far more complicated than that, for all things must be rationalized by our mind. In other words, you can’t control your life, and it’s going to suck sometimes. Even in 1989, Dylan was taking advantage of our most vulnerable spots.

Idiot wind, blowing every time you move your teeth / You’re an idiot, babe / It’s a wonder that you still know how to breathe

Possibly the most brutal breakup line ever conjured. While Dylan has stated that “Idiot Wind” isn’t about his failing relationship with his first wife, Sara, their son Jakob has stated about the album in interviews that “the songs are my parents talking.” No matter the intent of the lyric, you probably shouldn’t say these words to anyone unless you never intend to speak to them again.

They’re selling postcards of the hanging

One of the most shocking first lines of any song ever, the lyric refers to an actual hanging of three black men that occurred in Dylan’s hometown in Duluth, Minnesota on June 15, 1920. Hanged after being accused of raping several white women, photographs of the event were actually printed and sold as postcards in Duluth. Dylan’s father, Abram Zimmerman, actually witnessed this event as a child and passed on the story to Dylan.

Thought to be written in reaction to the 1965 Newport Folk Festival incident, this is the eternal response to all the haters out there.

“The Times They Are A-Changin’”

Don’t criticize what you can’t understand

A timeless lesson for all generational gaps, Dylan had a simple bit of advice for those who weren’t in line with the counterculture of the ’60s: this isn’t for you, so don’t stand in our way.

Considered one of the greatest songs in existence, Dylan calls out those who were born with a silver spoon and laughed at the misfortune of the poor. When the narrative is riches to rags, Dylan has little sympathy.

In a soldier’s stance, I aimed my hand at the mongrel dogs who teach / Fearing not that I’d become my enemy in the instant that I preach / My pathway led by confusion boats, mutiny from stern to bow / Ah, but I was so much older then, I’m younger than that now

Finally, there’s only one person left for Dylan to turn his gaze upon: himself. Coming from 1964’s Another Side of Bob Dylan, “My Back Pages” stylistically hearkens back to his earlier folk protest songs, but this time around, the political preacher at fault is the one he sees in the mirror. Dylan has concluded that, in his youthful attacks, he has fallen into the same bitter, close-minded system. However, he is indeed working on righting his past wrongs.