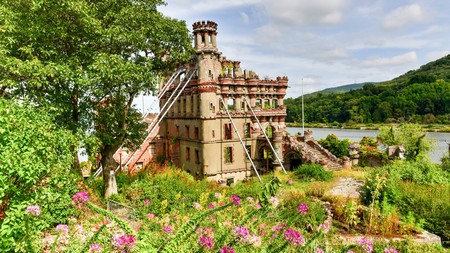 When you really think about it, it’s unsurprising that the USA is home to many remarkable fortresses. After all, the hodgepodge of architecture to admire across the country, from Spanish colonial to Gothic revival, reinforces the notion that it is indeed a giant melting pot. Let’s see what America offers in the way of buildings fit for fairytales, or, perhaps, the Middle Ages.

Located on Pollepel Island, 50 miles north of New York City on the Hudson River, Bannerman Castle is a striking, albeit dilapidated, structure. It was originally commissioned by Frank Bannerman, a Dundee-born emigrant who moved with his family to Brooklyn in 1851 at the age of three. In 1901, he began construction on the castle with the aim of building a Scottish-style castle to be used as a simple family residence. The building ultimately became a warehouse for ammunitions which Bannerman sold. Today it is managed by the Bannerman Castle Trust and can be visited on guided and self-guided tours. 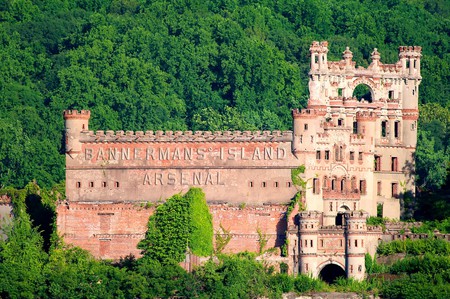 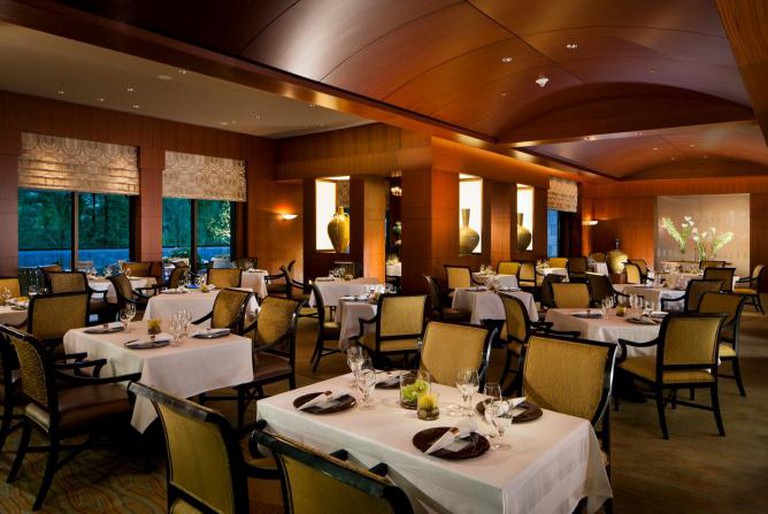 Interior Herons at the Umstead | © The Umstead Hotel and Spa
Biltmore is currently the largest privately owned home in the United States, at around 180,000 square feet. George Vanderbilt, of the revered Vanderbilt family, began construction on the estate in 1889 with the vision of creating a 250-room French Renaissance chateau. It took six years to complete, opening to friends and family in 1895. The estate is open to self-guided tours throughout the year, which permit visits to Biltmore House as well as acres of surrounding formal and informal gardens.
Open In Google Maps
1 Lodge Street, Asheville, North Carolina, 28803, USA
+18004113812
Visit Website
Give us feedback 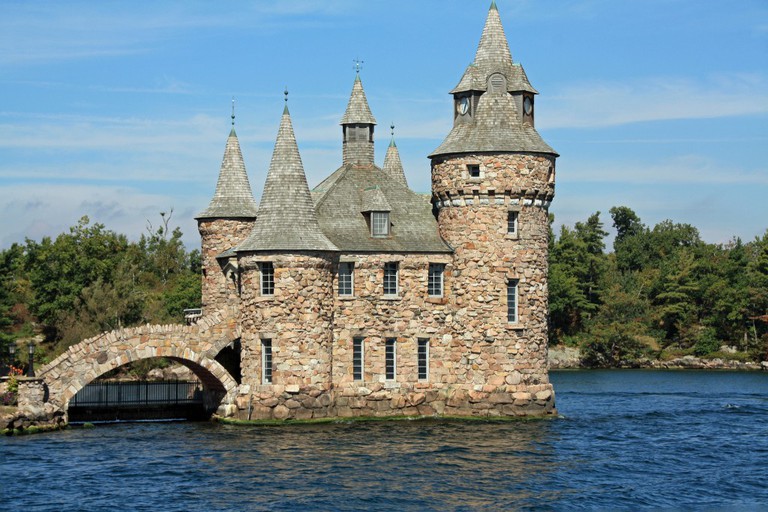 Boldt Castle | © Christine Wagner/Flickr
Another island-dwelling structure, Boldt Castle was actually built as a grand romantic gesture by George C. Boldt for his wife, Louise. The millionaire proprietor of the Waldorf Astoria Hotel in New York City, Boldt began construction on the building in 1900 on Heart Island in Alexandria Bay. It was intended as a full-size Rhineland castle with 120 rooms, Italian gardens, a drawbridge and more. When Louise suddenly passed away in 1904, construction came to an immediate halt as Boldt could no longer imagine living in the castle without his wife. Since being acquired by the Thousand Islands Bridge Authority in 1977, Boldt Castle has been restored and preserved for visitors to see.
Open In Google Maps
Alexandria Bay, New York, 13607, USA
+13154829724
Visit Website
Give us feedback 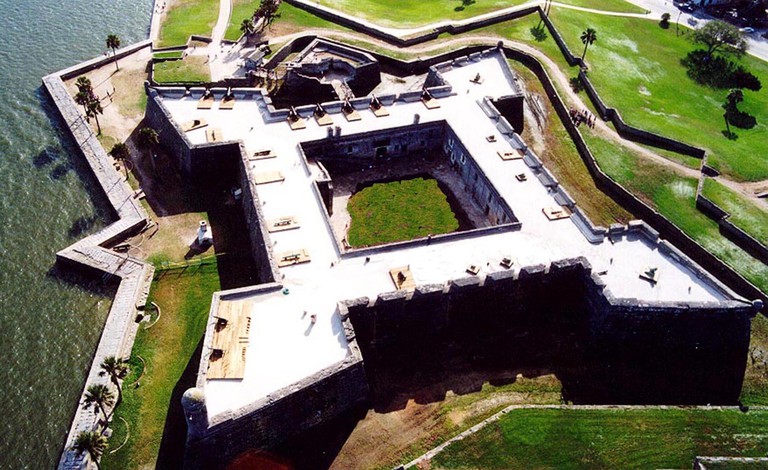 Public Domain / Wiki Commons
Castillo de San Marcos is the oldest masonry fortress in the US as well as the only existing military building from the 17th century. Located on the coast of Florida, it was originally built to protect the European city of St. Augustine and was later occupied during multiple sieges. Beginning in 1875, after Spain had ceded Florida to the US in 1821, Castillo de San Marcos was used to imprison members of numerous Native American tribes. During this time, incarcerated men were encouraged to draw and create artworks, some of which are now held at the Smithsonian Institution. A structure with a vastly eventful history, albeit not an entirely positive one, this castle is open to visitors year round.
Open In Google Maps
1 S Castillo Dr, St. Augustine, Florida, USA
Give us feedback

Museum
Facebook
Email
Twitter
Pinterest
Copy link
Share
Map View
This Neo-gothic building doesn’t totally fit the bill of a castle, and yet it does look like one. Inspired by Scottish and Irish prisons, architect John Haviland designed this former penitentiary, situated in Philadelphia, and it was opened in 1829. At the time of its completion, it was the largest and most expensive structure ever built in the United States, covering 11 acres of land. At a time when the White House was heated by coal-burning stoves and had no running water, the Eastern State Penitentiary was a state-of-the-art building where each prison cell was centrally heated and had a flush toilet. Today, the prison is a US National Historic Landmark and a museum allowing visitors to tour the premises while listening to Steve Buscemi on the audio guide.
Open In Google Maps
Fairmount Avenue, Philadelphia, Pennsylvania, USA
Visit Website
Visit Facebook page
Give us feedback 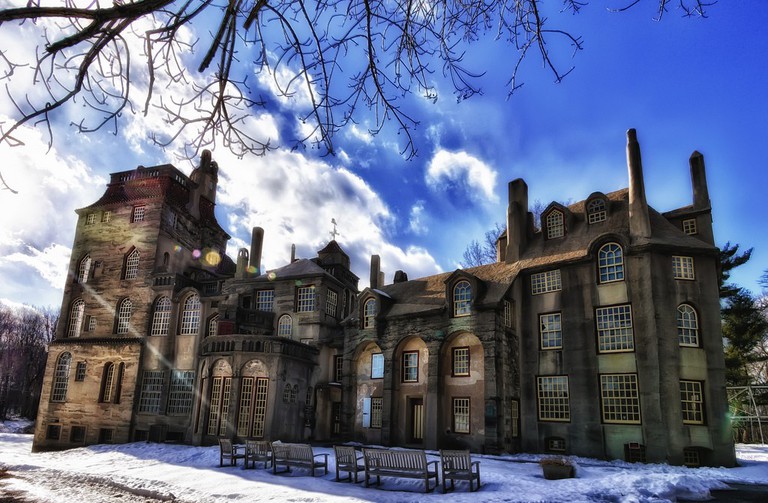 Fonthill Castle | © James Loesch/Flickr
Home to archaeologist and ceramicist Henry Chapman Mercer, Fonthill Castle was also used to house and showcase his collection of decorative Moravian tiles and prints. The building was designed by Mercer himself, drawing on Medieval, Gothic and Byzantine styles, and completed between 1908 and 1912. When Mercer passed away in 1930, he had willed the estate to his housekeeper Laura Swain and her husband to live in and run as a museum. In 1975, Fonthill Castle was passed on to the Trustees of the Mercer Foothill Museum who elected to continue operating it as a house museum. Visitors can explore the building and museum on one-hour-long guided tours, which are conducted on a daily basis. Reservations are highly recommended.
Open In Google Maps
525 East Court Street, Doylestown, Pennsylvania, 18901, USA
+12153489461
Visit Website
Give us feedback

William Hooker Gillette, an actor and playwright who famously portrayed Sherlock Holmes on stage and in a silent film in 1916, built this eponymous castle on a 184-acre estate atop a hill. He originally referred to it as the Seventh Sister, as the hill was part of a chain known as the Seven Sisters. Constructed using fieldstone and designed by Gillette down to the finest details, it took five years and 20 men to complete this 24-room mansion between 1914 and 1919. After Gillette had passed away, the State of Connecticut purchased the castle from the executors of his will in 1943. Gillette Castle is now open to the public from May to October, and the grounds are open year round. 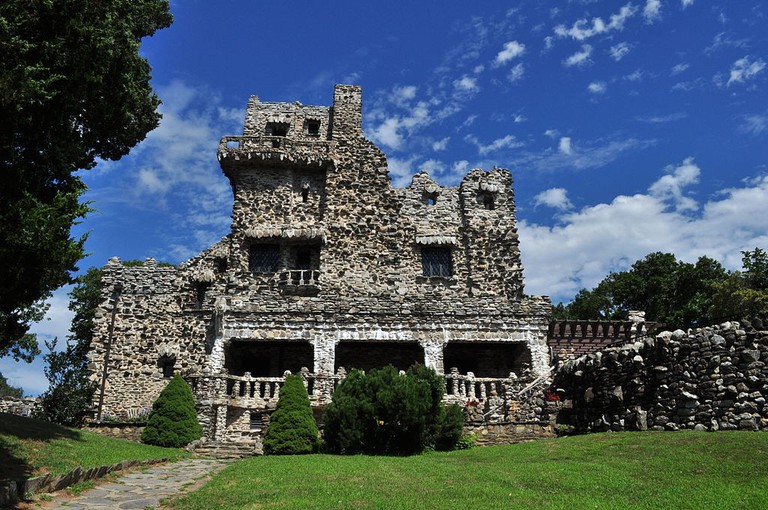 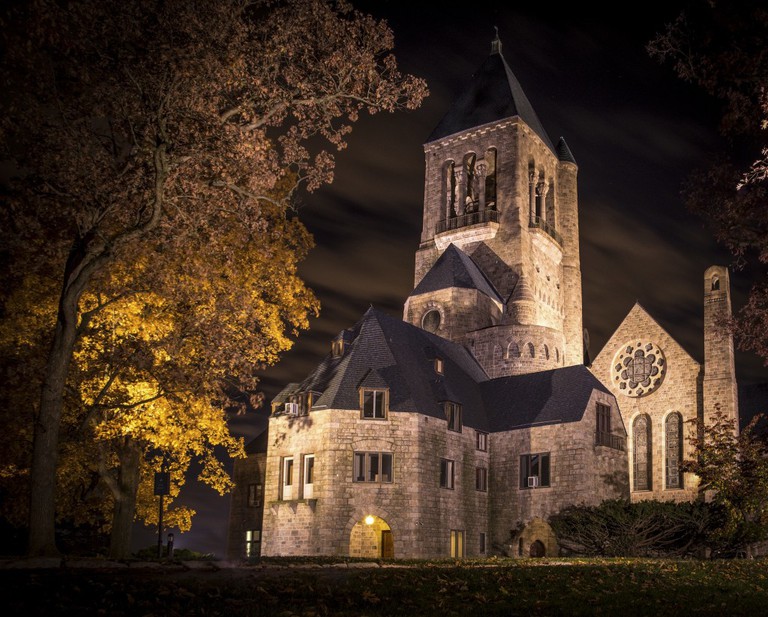 Glencairn Museum | © Thomas/Flickr
The home of Raymond and Mildred Pitcairn, Glencairn was built between 1928 and 1939 in the Romanesque architectural style. In addition to being their primary residence, the building housed Pitcairn’s own collection of medieval objects. As lifelong members of the New Church, it was unsurprising that the Pitcairns willed Glencairn to the Academy of the New Church after they passed away (Raymond in 1966 and Mildred in 1979). The Academy decided to move its own museum (Academy Museum) into Glencairn, combining its collection and that of Pitcairn in one place. The first floor currently operates as a center for culture and social events, while the other floors are used as museum galleries.
Open In Google Maps
#0757, 1001 Cathedral Road, Huntingdon Valley, Bryn Athyn, Pennsylvania, 19009, USA
+12675022600
Visit Website
Give us feedback

An incredible feat, Castello di Amorosa is a winery-cum-castle which was constructed between the early 1990s and 2007, when it officially opened its doors to the public. It is the only authentically-built medieval Tuscan castle in the United States, serenely tucked away in the California’s Napa Valley. The project of fourth generation Italian winemaker Dario Sattui, Castello di Amoroso comprises 107 rooms, a drawbridge, defensive towers, a torture chamber, a chapel and many more grand features. Wine made at the castle is only available to be sampled or bought there, as there is no distribution to stores or restaurants. Visitors can taste a variety of wines on offer and peruse the grounds on their own or learn more about the castle through guided tours. 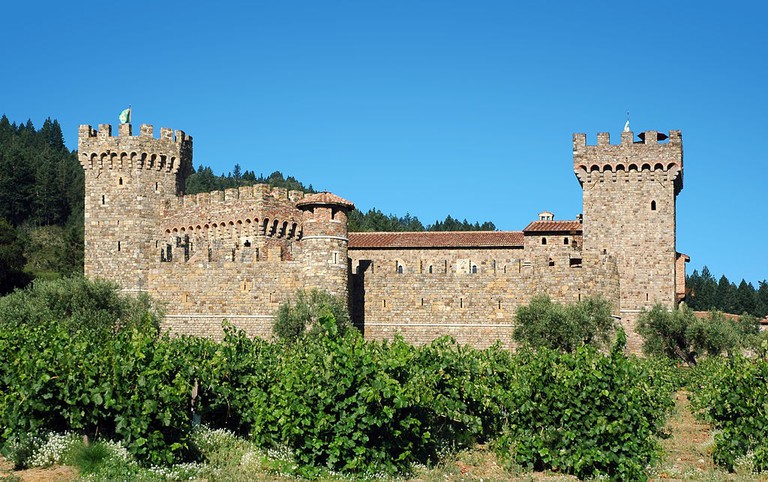 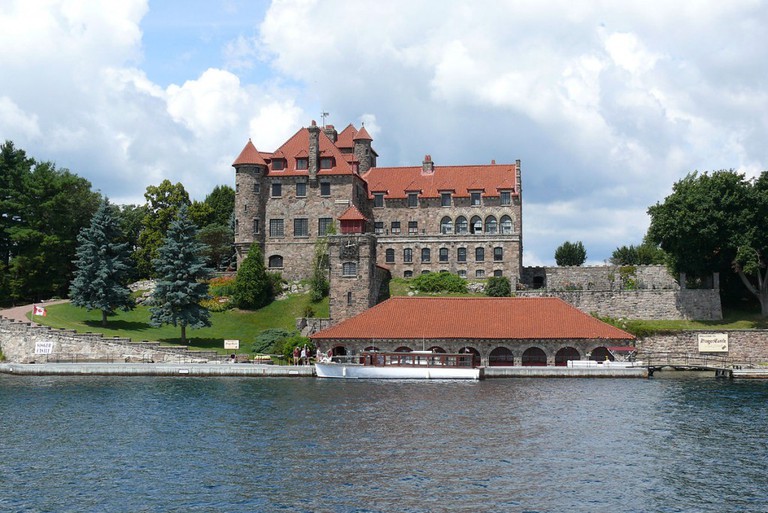 Singer Castle | © Ad Meskens/WikiCommons
Located on the St. Lawrence River in New York, Singer Castle was privately owned by the Bourne family from the time of its construction in 1905 until the mid-1960s. Originally known as “The Towers,” the property, situated on Dark Island, was renamed Singer Castle because its proprietor Frederick Bourne was the fifth president of the Singer Sewing Machine Company. It was acquired in 1965 by The Harold Martin Evangelistic Association, and owned by Dr. Harold Martin for over 30 years until it was sold to Dark Island Tours, Inc. in 1995. Since then, the Singer Castle has undergone restoration to allow for public tours of the island and main house. Visitors can admire its unique artifacts and original furnishings spread across 28 rooms and learn about secret passageways which exist throughout the building. There’s also a ‘Royal Suite’ accommodating up to six guests overnight, with meals and an extended private tour included. Or, you can splash out $24 million to buy Singer Castle as it’s once again for sale.
Open In Google Maps
1136 County Route 6, Chippewa Bay, New York, 13623, USA
+13153243275
Visit Website
Give us feedback 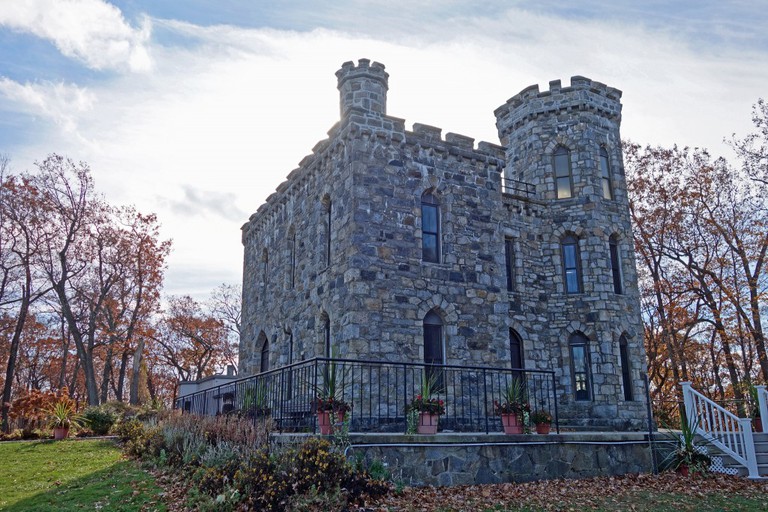 Winnekenni Castle | © Bill Damon/Flickr
An Algonquin word meaning ‘very beautiful’, Winnekenni was a passion project of acclaimed chemist and agriculturist Dr. James R. Nichols. Constructed between 1873 and 1875 in Haverhill, Massachusetts, Dr. Nichols determined that this petite chateau should be built using boulders and rocks, commonly found across New England, in effort to prove their effectiveness as building materials. Perched atop a hill overlooking Kenoza Lake, Winnekenni initially had views across 17 towns, two mountains and the ocean. It featured a Grecian drawing room, a triclinium (specifically a Pompeian-style dining room) and nine bedrooms. Since the 19th century, the castle has passed through numerous hands. It is currently owned and managed by the Winnekenni Foundation and serves as a venue for many local community events.
Open In Google Maps
Castle Road, Haverhill, Massachusetts, 1830, USA
+19785211686
Visit Website
Give us feedback
Give us feedback