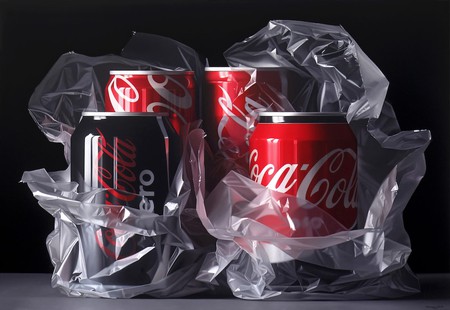 Believe it or not, these images are meticulously detailed paintings so realistic you’d swear they’re photographs. 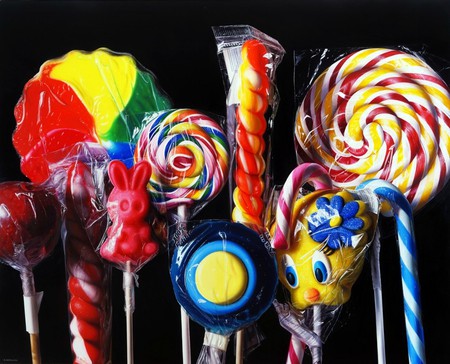 Italian artist Roberto Bernardi crafts ultra-realistic images in oil on canvas. Despite its vivid luminosity and the crinkly texture of the wrappers so detailed that you can practically hear them, Tweety and Bunny (2017) is mere paint—even if it looks good enough to eat.

Eyes coated in glitter; viscous metallic liquids dripping from red lips—Marilyn Minter’s women are unapologetically provocative. The multidisciplinary American artist captures a visceral seductiveness in her subjects, whom she photographs, films, and yes, paints. Minter’s Bullet (2004) is a prime example of her photorealistic enamel paintings on metal.

Jason de Graaf’s Still Life with Comic Books (2018) only appears to be a moody snapshot of objects and edibles haphazardly arranged on a table. The Canadian artist specializes in immaculate still-life acrylic-on-panel renderings, in which he juxtaposes unlikely bric-a-brac to foster serene scenes. 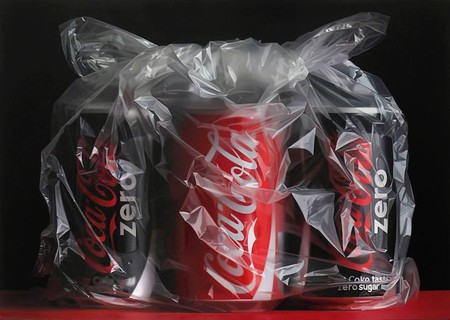 Madrid-based painter Pedro Campos demonstrates a supreme mastery of realist detail through the pristine rendering of reflective surfaces and complex textures. His oil on canvas paintings of glass jars, canisters, sweets, fruits, and plastic wrapping are so precise that they appear downright photographic. 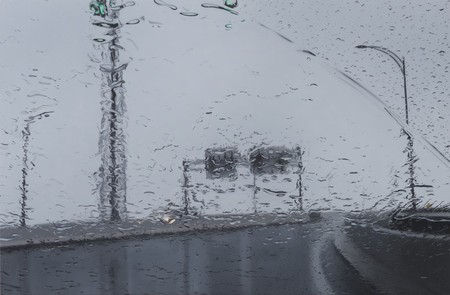 New York City-based artist Gregory Thielker paints and draws the realms of “movement, territory, and memory” to evoke the experience of place. Drift (2016) is an oil painting on linen from Thielker’s project titled Under the Unminding Sky, in which the artist depicts life on the open road from behind a rain-battered windshield. 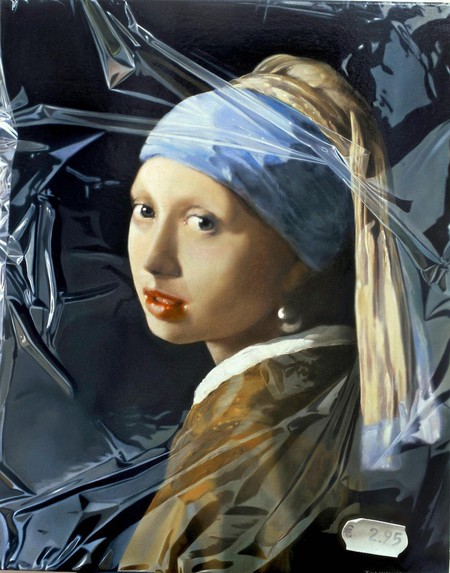 Working within the sphere of “megarealism,” Dutch painter Tjalf Sparnaay illustrates large-scale food items and everyday objects in exquisite detail. He adds his own realist touch to an old Delft masterpiece by wrapping Johannes Vermeer’s timeless subject in loose plastic so as to capture its texture and sheen.

Eloy Morales, Paint in My Head 9 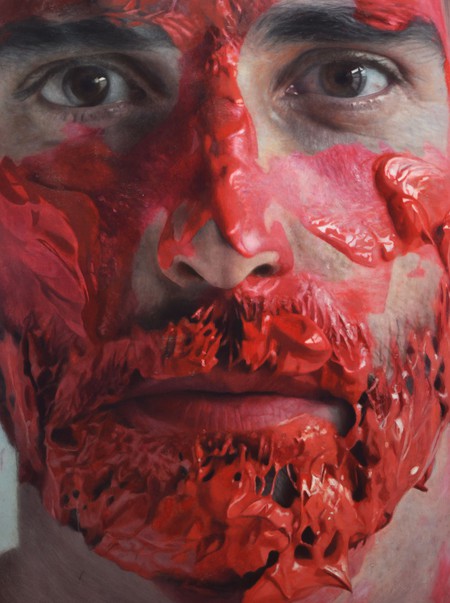 It’s easy to be fooled by one of Eloy Morales’s portraits. The Madrid-based painter renders human faces with detail so delicate it seems as though it must be photographic—but in reality, he’s a master with oil paint and a brush. Paint in My Head 9 (2013) is part of a series of close-up portraits Morales executed of zoomed-in faces covered in thick paint.

Brooklyn-based multidisciplinary artist Ben Schonzeit captures the world around him with arresting precision. From fruits and vegetables to flower arrangements and everyday objects, Schonzeit’s immaculate technique has yielded a breadth of photorealistic images. Aalto Anemones (2014) depicts polychromatic flowers in a glass vase, set to the backdrop of black and white stripes. 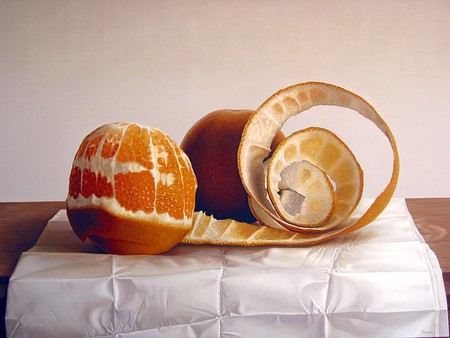 “I really enjoy the challenge of reproducing skin tones with natural light and the nuances that it gives us, particularly in very bright environments,” says Mexican hyperrealist painter, Omar Ortiz. The artist is best known for his naturalistic paintings of the female form, but Still Life of Orange (2005) exquisitely captures the porous textures of a different kind of skin.

Spanish artist Jesus Navarro specializes in traditional still-life paintings of fruits and flora. His portrayal of lemons in a bowl is so realistic that you can practically smell the citrus.