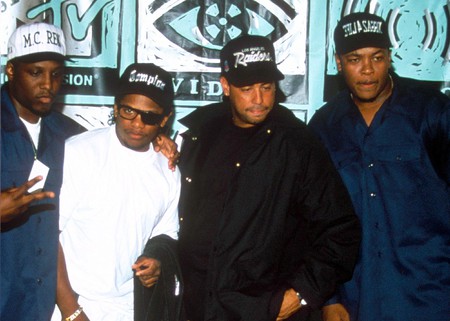 To celebrate the 30th anniversary of N.W.A’s debut studio album Straight Outta Compton, we delve into the best samples that were featured on the seminal LP.

N.W.A’s debut studio album Straight Outta Compton was a musical tapestry fueled by searing lyrics, funk-based beats, and a patchwork of samples borrowed from the finest in the world of soul, rap and funk.

Sampling is an integral part of hip-hop culture and this was something that the rap group did deftly – taking the drums from one track, the vocals from another and the beats from something else. Most tracks often featured more than one sample, creating an invigorating new composition.

If you know your music, you can make out a whole kaleidoscope of samples on their 1988 album, from the Godfather of Soul, James Brown, to funk pioneers Charles Wright & The Watts 103rd Street Rhythm Band.

Here we take you through some of the samples that were featured on the groundbreaking LP.

The album’s opener featured a track that has gone on to become one of the most sampled in the history of music. The Winstons were a funk and soul outfit. Their 1969 song ‘Amen, Brother’ includes a six-second, four-bar drum solo, known as the Amen break, which has been sampled frequently in hip-hop, breakbeat, ragga, drum’n’bass and jungle.

N.W.A’s protest song against police brutality includes a snippet from James Brown’s track ‘Funky Drummer.’ The drum break, which was improvised by Clyde Stubblefield, is one of the most frequently sampled rhythmic segments in hip-hop after it was first used in Public Enemy’s ‘Rebel Without a Pause.’

‘Gangsta Gangsta’ samples the most famous line of William DeVaughn’s breezy soul hit ‘Be Thankful for What You Got.’ The band put their own spin on the lyrics: “Diamond in the back, sunroof top / Diggin’ the scene / With a gangsta lean.”

New York’s Public Enemy were one of the first mainstream political rap groups and were hugely influential. N.W.A became successful around the same time and the band gave a little nod to their peers in ‘If It Ain’t Ruff’ by borrowing a vocal sample from ‘Don’t Believe the Hype.’

‘8 Ball’ is a remix of a B-side track on N.W.A’s debut single ‘Panic Zone.’ It featured a snippet from one of Beastie Boys’ best-known songs, ‘(You Gotta) Fight for Your Right (To Party!).’

Dr Dre and MC Ren share the spotlight on ‘Something Like That,’ which borrows a sample from Steve Miller Band’s ‘Take the Money and Run.’ The latter was a hit song for the US rock band and revolved around two bandits on the chase from the police.

N.W.A’s Eazy-E was a nephew of musician Charles Wright, who wrote ‘Express Yourself.’ The song, performed by Charles Wright & The Watts 103rd Street Rhythm Band, became their signature hit and has also been sampled by the likes of Tinchy Stryder and Labrinth.

Ice Cube got a solo spot on ‘I Ain’t Tha 1,’ a song about gold diggers that uses a loop from Brooklyn funk band Brass Construction’s ‘The Message (Inspiration).’ The track was also sampled in Mariah Carey’s song ‘Heat.’

American disco/funk band KC and The Sunshine Band have had a lot of their tracks sampled in hip-hop. ‘I Get Lifted,’ which featured George McCrae, was also included on The Notorious B.I.G’s ‘Respect’ and Snoop Dogg’s ‘Gin and Juice’ after appearing in N.W.A’s ‘Quiet on Tha Set.’

Arabian Prince takes the lead on the album closer while Dr Dre, DJ Yella and Eazy-E rap about girls in the club needing something to dance to in the background. The electro track uses a sample of ‘You’re the One for Me’ by New York post-disco duo D-Train.