Movies That Will Make You Fall in Love With Nature 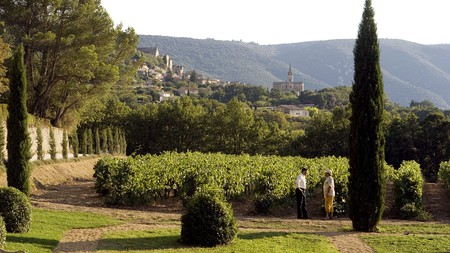 If you’re in need of visual inspiration and a big cinematic hit of nature, then these movies will make you fall headlong in love with the great outdoors.

From the surreally beautiful mountain-spiked landscapes of Middle Earth to the bamboo forests of China and the blistering deserts of Morocco, the one thing these films have in common is their leading star: the natural environment. Some are epics of fiction, others are documentaries about great wildernesses and the perils they face today. All are essential viewing.

This whimsical, adventurous rom-com stars Ben Stiller as the day-dreaming fantasist Walter Mitty – he of James Thurber’s 1930s short story – traversing some gorgeous, rugged landscapes in search of Sean Penn’s photographer character. As well as a great script and soundtrack, it’s a visual tour-de-force which has Iceland stand in for both Greenland and the Himalayas. All that and it plays itself, too, with scenes shot on the Snaefellsnes Peninsula, the Skogafoss waterfall and mountainous Vatnajökull National Park.

For scenes so evocative of the Middle East that they seem to emit desert heat from the TV screen, this classic Oscar-winning epic about the life of World War I legend TE Lawrence stands alone. The colours captured on the Super Panavision cameras, which were cutting-edge at the time, jump from the screen. You’ll feast on the vivid ambers and violets of sunsets over the sand dunes, of the whiteness of Peter O’Toole’s traditional Arabian thawb against the jet-blue skies, the green of the palm trees in Seville, which stands in for Cairo, Jerusalem and Damascus. 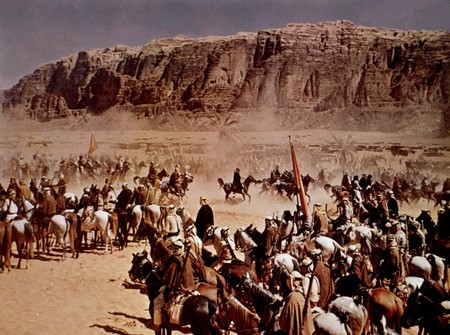 The way they shot the action sequences in this Chinese romantic martial-arts movie was breathtaking: with digitally removed wires the characters appeared to be floating. But above everything, it was the natural environments that stole the show: meadows of chest-high wildflowers, birch forests in the full blaze of autumn, misty jungles of bamboo that seem to glow luminous green. Surprisingly, only part of the filming took place in China – the majority was in Ukraine’s Hutsul Region National Park.

To film The Lord of the Rings trilogy, more than 150 different settings throughout New Zealand represented locations in JRR Tolkien’s high-fantasy novels. From the rolling green hills of “the Shire”, to the jagged mountains of Mordor, it may look like the stuff of pure CGI magic, except that all of these places are real. Which makes watching the films a bit like taking a tour of the country’s most dramatic landscapes – from the verdant dairy-farming landscape around the town of Matamata, in Waikato, North Island, to sheer-side Mount Sunday, on the South Island, where, handily enough, there’s accommodation. 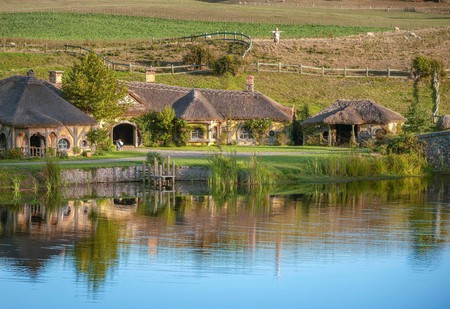 Waikato, in New Zealand, was one of the locations where ‘The Lord of the Rings’ was filmed | © imageBROKER / Alamy Stock Photo

The scenes are unforgettable: Meryl Streep and Robert Redford picnicking on a hillside overlooking the vast Kenyan savannah; a steam train trailing vapour far below on the Great Rift Valley floor. This classic cinematic retelling of Karen Blixen’s 1937 memoir, about life in what was then British East Africa, is about as accurate a representation of the actual location as was possible to film. It even features parts of her own property, and the descendants of the tribespeople she befriended. The dramatic shots of the Ngong Hills were actually of the slightly more picturesque Chyulu Hills, and shots of 1930s Nairobi had to be recreated, but the overall effect is utterly transporting.

Even though we can’t talk to the animals, this National Geographic movie is surely one of the most accurate evocations of what it’s like to be a penguin, surviving in the Antarctic, one of the harshest environments on the planet. With intoxicatingly beautiful narration by Morgan Freeman to guide us through the various events depicted, it’s a film to fill every heart with love and affection for the untamed environment – and especially for these waddling black-and-white wonders of the natural world. 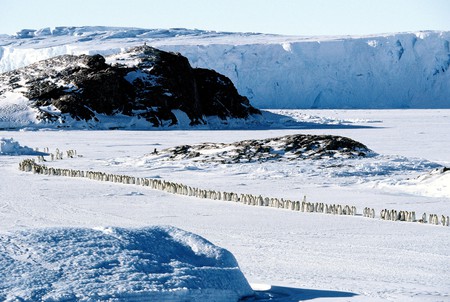 Davis Guggenheim did a fine job directed this cinematic rendering of former American vice-president Al Gore’s life and career, focusing on his passion for environmental issues and the ways in which he sought to throw light on planet earth’s predicament. Are we destroying the planet? That’s the big question at the heart of the movie, which has done more perhaps than any other to raise consciousness about the perils of global warming.

Masterfully directed by Sean Penn, this film narrates the true story of Christopher McCandless, who, having graduated from Emory University, decides not to pursue a successful and profitable career and turns down his family’s wealth. Donating everything he has to charity, he heads out, at the title says, into the wild and does his best to survive. The scenery is magnificent, even if the ending of the movie, like its message, is extremely sobering. The underlying dialectic is the struggle between society and nature and, if you’re like us, you’ll leave ready to rethink received wisdom concerning materialism. 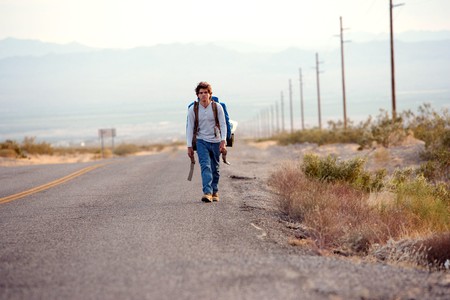 Without any narration, Koyaanisqatsi brilliantly depicts nature and civilisation alongside one another, pitting them against each other in utterly surprising, occasionally appalling ways, to the eerie music of Philip Glass. The title derives from the Hopi Indian word for “life out of balance”, suggesting that the modern world and technology have long been at war with the environment and its sublime beauty. The two realities, the film suggests, are inextricably linked, nature having been reduced to the resources on which technology feeds. Using slo-mo techniques and speedy time-lapse footage, it is a remarkable experiment, and ultimately some kind of condemnation of humanity’s potential for destructiveness.

Based on Cheryl Strayed’s memoir, Wild: From Lost to Found on the Pacific Crest Trail, this American biographical movie describes the hike of a recently divorced woman who embarks on a journey of self-discovery and healing. Reese Witherspoon takes the lead, delivering a captivating performance, and the film, with its inspiring qualities, delivers so much to think about. That’s in no small part due to its redemptive, relatable style, which evokes in us a genuine love of, and connection to, nature. 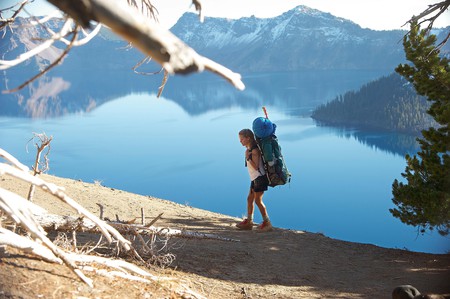 This groundbreaking documentary employs all-new technologies in aerial shooting and photography to take the viewer high above the vertiginous glaciers, ski fields and summits of the Alps. Shot using pin-sharp Cineflex, it’s best watched in high definition and delivers some superb insights into the region’s most fascinating spots.

Starring Marion Cotillard and Russell Crowe, A Good Year is a British romantic drama set in Provence, in the south of France. With the amazing views and the wonderful atmosphere of this land as a backdrop, the action unfolds, captivates and enthralls and it may just make you want to leave behind the hustle and bustle of city life for good. 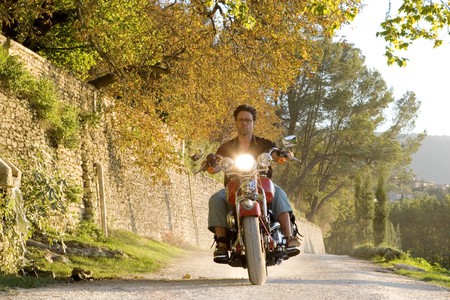 With award-winning German film-maker Werner Herzog directing, Encounters at the End of the World makes the eyes pop in amazement at the otherworldly magnificence of Antarctica. This is a brilliant (in both senses) documentary of his adventure near the McMurdo Station, lassoing in stories of the singular people he encountered at the bottom of the world. You can’t fail to be seduced by the sublime beauty of the ice-coated peaks and flanks, as well as by the eerie sense of wilderness, unconquered by humans.

Starring Leonardo DiCaprio as the tireless hedonist, The Beach is the story of an American backpacker who decides to travel to Thailand and find a mysterious island sold to him as a secluded paradise. Shot in Bangkok and on the jungle-shrouded, white-sand beaches of Ko Phi Phi Le, this is an unrivalled introduction to the whole essence of Southeast Asia – from the unbridled pleasures of the big cities to the irresistible appeal of its pure-sand beaches.

This fine documentary is an account of both the beauty of our planet and of people’s monstrosity when dealing with nature. It is the result of the efforts of photographer Sebastião Salgado, who traveled for 40 years through four continents and as he went, traced the effects of recent historical events on a succession of natural settings. Simply put: not to be missed. 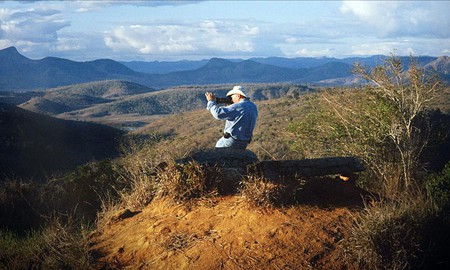