10 Cities Around The World Destroyed And Rebuilt

From Sodom and Gomorrah, consumed by fire and brimstone in the Old Testament, to Babylon and Ctesiphon, ruined and swallowed by the sands after their empires collapsed, we can safely say that the rise and fall of cities has been a constant in history. Thankfully, not all these stories were made to be discouraging: Gathered here for you are 10 cities once destroyed by the hand of man or natural disaster, which now stand rebuilt. 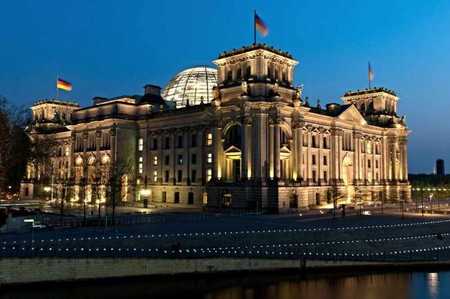 Hitler planned to turn Berlin into his ‘World-Capital’ Germania. Instead the city endured the bombing raids of the RAF and American Eighth Air Force during the war, before the Soviets closed in, shelling and bombarding the city, then fighting street-by-street for control. Famously they took the Reichstag Building and left it in ruins – one of the iconic images of the last days of the War is the Soviet flag flying from its roof. Around 80 percent of Berlin was destroyed, and many buildings that survived are still pocked by bullet holes. Rebuilding has been going on since 1946, and you’ll still find strange open spaces in central Berlin. Potsdamer Platz, once a hub of activity in the Weimar era and flattened during the war is now home to huge developments like the Sony Center and Daimler Complex, while the Reichstag now boasts a glass dome from Norman Foster. 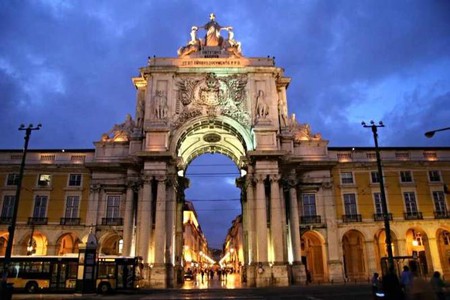 On All Saints’ Day, November 1, 1755 Lisbon was rocked by a huge earthquake followed forty minutes later by a tsunami. Fire spread across the city and burned for five days destroying palaces, libraries, royal galleries, churches and monastic buildings. 30,000 people were killed and 85 percent of the city is reckoned to have been destroyed. As it occurred on a holy day some saw the earthquake as divine judgement on the moral turpitude of the Portuguese. Certainly the earthquake impacted European philosophy, shaking the Enlightenment faith in a benevolent Creator. Under the Prime Minister the Marques do Pombal Lisbon was reborn. The Baixa Pombalina area was laid out on a grid pattern with buildings reinforced against earthquakes with lattice-cage infrastructures with classical architecture. A whole new Praça do Comércial was built with a huge Triumphal Arch to symbolize the resurgence of the city. 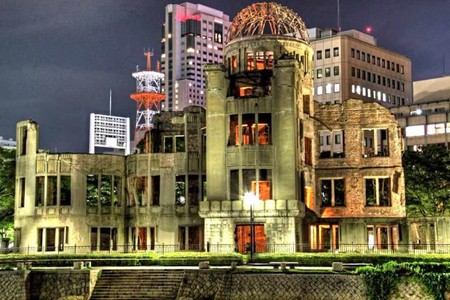 Hiroshima was a major military headquarters during the Second World War and a city dating back to the 16th century in western Honshu. On August 6, 1945 an American B-29 bomber called Enola Gay dropped the first atomic bomb on the city. 70,000 people were dead in an instant. The same amount probably died from radiation and injuries. And most of the city was gone. What was left was soon further damaged by a typhoon that hit in September. After the war the population slowly started to rise again, new buildings went up, with the 16th century Hiroshima Castle being rebuilt in the 1950s to serve as a museum documenting the history of the city. The Genbaku Dome, the closest surviving building to where the bomb, named ‘Little Boy’ by the Americans, landed is now a UNESCO World Heritage Site and peace memorial. 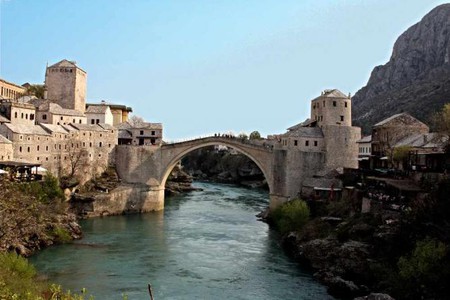 Mostar in Bosnia and Herzegovina lies on the Neretva River. For centuries Mostar was famous for its architecture, its mixture of Islamic, Serb Orthodox and Catholic cultures, and for its bridge, the Stari Most, that spanned the river. The Old Bridge was built in the 1560s by Ottoman engineers for the great Sultan Suleiman the Magnificent. Then, during the Croat-Bosniak War of 1992 to 1995, Mostar became a strategically important site, occupied at times by both sides, and bombed, shelled and left a fragment of its former self. Mosques, churches, libraries, cathedrals, and the bridge were all ruined. Since the end of the conflict international organizations like the World Bank, the European Union and the Aga Khan Trust for Culture have funded the rebuilding of the city. In 2004 a huge step forward was taken with the restoration of the Old Bridge. 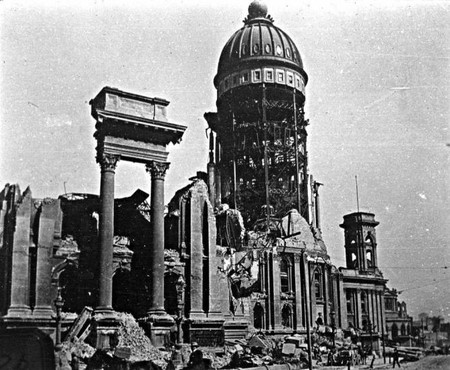 The 1906 earthquake on the San Andreas Fault and the fires that followed flattened San Francisco, then the main cultural and financial center of the western United States. After the 1900 Galveston Hurricane it remains the most deadly disaster in United States history, with around 3000 people killed. The earthquake came at five in the morning, and for days afterwards that which wasn’t razed by the earthquake was consumed by the flames. The water supply needed to control the fires was, inevitably, out of action due to the earthquake damage. And dynamite used to destroy ruined buildings to create firebreaks had the opposite effect. But by 1915 San Francisco had recovered. New, wider street-plans were instituted, and areas like Pacific Heights were developed. The World’s Fair of 1915 was able to celebrate the completion of the Panama Canal and the recovery of San Francisco. 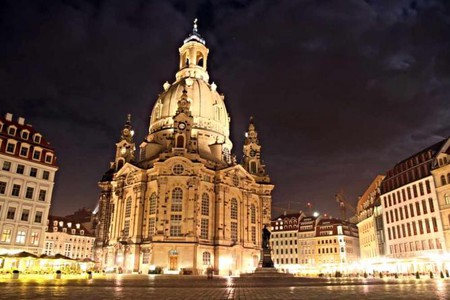 The bombing of Dresden remains one of the most controversial acts of the Second World War. Dresden had been a cultural center for centuries, the capital of the Electors of Saxony and renowned for its Baroque architecture. On the nights of February 13th to 15th the city was firebombed by the RAF and USAAF. Critics call it a case of area bombing, that is, the indiscriminate bombing of a location with no specific tactical target. Dresden’s historical center was gutted and destroyed, along with hundreds of thousands of homes in the suburbs with thousands of civilian casualties. Since 1945 the center of Dresden has been rebuilt, with the Frauenkirche, Zwingler Palace and Opera House restored as they were before 1945. Curiously this wasn’t the approach of Coventry, Dresden’s twin city, which pulled down most of its ruins and built new structures rather than recreating the old. 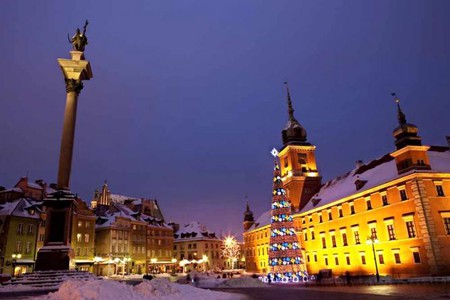 The Luftwaffe bombed Warsaw heavily during the invasion of Poland in 1939. Then in 1944 the German Army, in revenge for the Warsaw Uprising that saw the Polish Resistance hit back against their German occupiers, launched an assault aimed at leaving nothing left of the city. Warsaw was shelled and bombed before teams with flamethrowers went in to burn what remained, including the historical archives and some of the most important library collections in Europe. Churches, palaces, and libraries that dated back to the 13th century were all razed to the ground. When the war ended the Warsaw Reconstruction Office took six years planning the reconstruction of the Old Town of Warsaw using street-maps from the 18th century. The Old Market Square, Royal Castle, city walls and palaces were all rebuilt in the 1960s and the Old Town is now a UNESCO World Heritage Site. 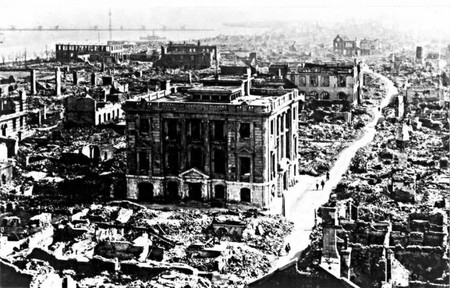 On September 1, 1923 the Great Kanto Earthquake destroyed Tokyo, Yokohama and other cities on the Kanto Plain on southern Honshu. As the earthquake struck at lunchtime the fires people were using to cook spread in the wooden buildings of Tokyo. Huge fires broke out, the tarmac of the streets melted, and 38,000 died in downtown Tokyo in one firestorm incident. Like in San Francisco the water needed to quell the blaze was inaccessible due to earthquake damage. In the end a total of 33 million square meters of the city had been left in ruins. In the wake of the destruction there were plans to create a new metropolis with more green spaces and more parks with wider avenues between buildings. Only the budget provided became smaller and smaller and the new city of Tokyo was rebuilt to more modest plans. 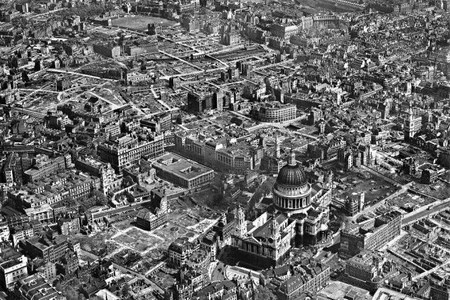 The Blitz began on September 7, 1940. The bombing of London lasted for 37 weeks, with 57 nights of consecutive bombing. In all the Luftwaffe dropped 20,000 bombs on London in 71 missions. They destroyed over a million homes and buildings. You can explore the exact location of many of the bombs here on the interactive map of the website Bomb Sight, the result of a National Archives research project. As soon as fighting ended the rebuilding began. One solution the city used was the tower block, with over half a million flats created for Londoners by the 1960s. The House of Commons had to be restored too after bomb damage, and the area of Cripplegate, which was almost completely destroyed on the night of December 29, 1940. In its place now stands the Barbican Center and Estate, a mix of houses, offices, art center and museum. 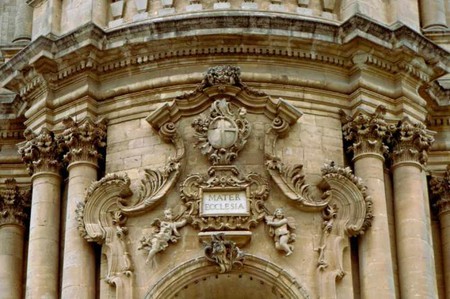 The Late Baroque Towns of the Val di Noto

Strictly speaking this is eight cities in the Val di Noto region of Sicily. But they were all rebuilt at the same time and in the same magnificent Baroque style following the destruction wrought by the huge earthquake of 1693 that struck Sicily, Calabria and Malta and killed 93,000. And together they form a UNESCO World Heritage Site noted as ‘the culmination and final flowering of Baroque art in Europe.’ The cities of the Val di Nota include Catania and Nota, which were totally destroyed and rebuilt following the earthquake, and Ragusa which moved to a separate hilltop site opposite its heavily damaged Old Town. The other Baroque cities of the Val di Noto are Scicli, Caltagirone, Militello Val di Catania, Modica, and Palazzolo. The Baroque style used for churches, palazzi, and piazzas is remarkable for its sinuous curves and sense of drama.