The return of Star Wars will soon be upon us with Episode VII — Force Awakens, and if the overwhelmed servers of Fandango and Moviefone are any indication, fans are agog with excitement. Here we acknowledge Episode VII’s important sci-fi predecessors. 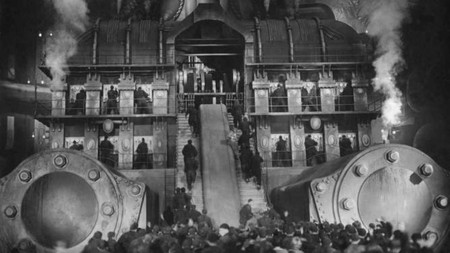 Fritz Lang’s silent masterpiece Metropolis has influenced countless films, from Blade Runner to those in the Star Wars universe — and the world of fashion, too. Set in 2026, it boasts heavy-handed Marxist overtones in its depiction of a fictional society’s vast disparities of wealth, which leads eventually to an uprising of the proletariat — though the revolutionary leader is a robot. Metropolis is essential viewing for its impact on cinema well beyond science fiction.

The world created in Planet of the Apes, much more familiar than would-be audience members might expect, presents a believable society of talking apes. The film was a pioneering step forward in the evolution of otherworldly set design and the prosthetic makeup of John Chambers (also known for Star Trek’s pointy-eared fan favorite, Spock).

Providing a glimpse into a future that humankind has feared as long as technology and computers have existed, 2001 wowed audiences initially with its computer graphics, special effects, and social commentary. The film’s message regarding our dependence on technology is as chilling now as it was in 1968. Be warned — next thing we know, Siri won’t be opening any pod bay doors for us either.

Perhaps best known for giving birth to one of cinema’s greatest monsters, Alien depicts a future in space that isn’t so far-fetched — viewers may find it mundane in the blink of an eye. Far from mundane, however, is Sigourney Weaver‘s powerhouse performance as super heroine Ripley, who leaves the damsel-in-distress archetype in the dust.

Right on the heels of his directorial success with Alien, Ripley Scott gave audiences a neo-noir look into Los Angeles, 2019. Though it was tepidly received at the box office, Blade Runner has since grown into a cult classic acknowledged for its visual effects and pioneering role in the continued development of the science-fiction genre.

An instant classic, Terminator introduced the world to infamous robot villain the T-800 Model 101 and solidified the careers of both director James Cameron and Arnold Schwarzenegger. While the timeline requires suspension of disbelief, Terminator is a glorious work of ;80’s action entertainment. Political career be damned — he’ll be back.

So, 2015 has arrived. While the hoverboards aren’t quite what were promised and current street style doesn’t quite match to the onscreen compatriots, Back to the Future remains a timeless blend of science-fiction and time-traveling hijinks, and features classic catchphrases that keeps audiences coming back for more. So make like a tree — and watch it again for old time’s sake.

The Druish King of satire, Mel Brooks gifted audiences with his enduring Star Wars parody Spaceballs. Being the mensch that he is, Brooks sought George Lucas’s blessing to make the film. Lucas agreed under the condition that no Spaceballs merchandise be sold. Hence, Yogurt’s (Yoda’s satirical counterpart) poignant words in the film: “Merchandising, merchandising — where the real money from the movie is made.”

After many a dystopian film in which man is in an ongoing fight with sentient machines, The Matrix proposed that modern society has already lost. With Y2K just around the corner from its 1999 release, anything could happen. Revolutionary fight sequences through the use of wire choreography and slow-motion bullet time sequences blew the minds of audiences.

Though drawing wide and fairly substantiated criticism regarding its plot, Avatar accrued $2.7 billion at the global box office with its cutting-edge CGI and motion capture technology. The film presents a mesmerizing 3D alien world that reset the bar for special effects.

Author’s Note: Seven out of ten of the films listed (Planet of the Apes, 2001: A Space Odyssey, Alien, Back to the Future, Blade Runner, The Terminator, and The Matrix) have made it into the National Film Registry of the Library of Congress. As soon as the 10-year waiting period passes, Avatar will likely join this league for its aesthetic significance.