10 Awe-Inspiring Places To Watch The Sunset

There’s nothing quite like watching the sun set and reveling in the warm glow while appreciating one of nature’s most stunning spectacles, and luckily we’ve lined up some of the world’s most awe-inspiring sunset spots. From seaside sunsets in Santorini to watching the sun go down at Australia’s Uluru, these ten locations are bound to take your breath away. 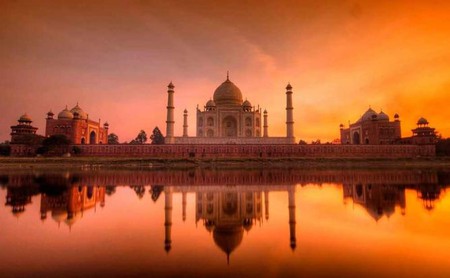 Undoubtedly one of the world’s most famous landmarks, the Taj Mahal – Agra, India’s beautiful white marble mausoleum built between 1631 and 1648 at the behest of Mughal emperor Shah Jahan in memory of his wife – is at its most spectacular at sunset. Watching the sunset from within the ground of the Taj Mahal is a delight – take sentry at the pool for stunning shots of the magnificent mausoleum reflected in its waters while the sun casts a warm glow on the Taj Mahal’s white marble – though visitors are treated to an equally beautiful sight viewing the sunset from across the Yamuna River at the Mehtab Bagh garden.

Regularly hailed as one of the best places in the world for truly scenic sunsets, the Greek island of Santorini is a gem of the Aegean Sea and home to several charming villages brimming with beautiful whitewashed architecture that has become synonymous with the Cyclades island group. Though you’re in for a spectacular sight at any of Santorini’s westward facing villages from the island capital of Fira to the clifftop commune of Imerovigli, but for a really stunning sundown head to Oia. Located on Santorni’s northwestern most tip, Oia is home to the ruins of Fort Londsa – a perfect vantage point for gorgeous Grecian sunsets.

Adventurers flock to northern Chile’s amazing Atacama Desert – the rugged 600 mile stretch of land sandwiched between the Andes and Pacific Ocean that boasts being the driest place on the planet – for its wild and remote beauty and if they time their trip correctly they’re in for one of the most awe-inspiring sunsets of their lives. Valle de la Luna, or ‘Valley of the Moon’, is home to stunning rock and sand formations sculpted over eons by wind and water that make a magnificent backdrop for sunset-watching while the breathtaking Licancabur – an active volcano stunning in its symmetry – is an equally stunning spot.

Carved over the course of history by the Colorado River, the Grand Canyon’s eroded rock forms and rich hues are a true testament to the beauty of nature and never is this more evident than at sunset. The breathtaking interplay between the setting sun and the vivid red, yellow and gold of the rock cast mesmerizing shadows over the Grand Canyon – a true sight to behold that 19th century geologist Clarence Dutton described as ‘so rich, so strong, so pure that it makes the heart ache and the throat tighten’. Hopi Point is one of the Grand Canyon’s most popular sunset-spotting locales but you can beat the crowds by heading to the less congested Yaki and Pima Points.

Created in 1961 to protect local wildlife, the Masai Mara National Reserve is one of the best-loved wildlife destinations in the world and home to herds of elephant, rhino, leopard and buffalo to name just a few of its animal residents. In addition to the bountiful fauna the Masai Mara has to offer, visitors to the reserve are also treated to quite possibly the most beautiful sunsets in the whole African continent – so stunning that photographers, such as Paul Goldstein, have spent years trying to perfectly capture the spectacle. Sunset safaris are the best opportunity for that perfect picture, and if you’re lucky you might just capture a herd of elephants silhouetted against the warm, orange glow of the African sun.

An experience on many a travelers’ bucket list, sunset at Uluru – the giant, age-old sandstone monolith in Australia’s Northern Territory also known as Ayers Rock and named a UNESCO World Heritage Site in 1987 – is a truly incredible sight. As the sun dips below the horizon Uluru puts on an awesome show changing color from brown to a blazing red to tones of blue and purple. Add to that Uluru’s ancient, cultural significance to Australia’s Aboriginal population – a sacred site, the Anangu state Uluru was created by ancestral beings during Dreamtime and has been the site of rituals and rites of passage for over 10,000 years – and you’re in for an awe-inspiring experience.

With Rio de Janeiro’s dramatic cityscape – from its sandy beaches and bustling metropolis to breathtaking mountains rolling down to the Atlantic Ocean – visitors are guaranteed an amazing sunset at any number of locales across the city. Head to the beach at Ipanema and enjoy a cocktail or two as the sun basks a warm glow over the Atlantic Ocean and Two Brothers mountains or trek up to the towering Christ the Redeemer statue atop Corcovado Mountain for amazing panoramic views as the light fades and the city lights start to twinkle. For a truly breathtaking experience, take the cable car to Sugarloaf Mountain and watch the sun set suspended 200 meters above the city.

While there’s no denying the wild beauty of watching the sun go down in some of the world’s more remote locations, the urban sunset is also a sight to behold and nowhere is this truer than Manhattan. Head to the top of the Empire State Building for stunning panoramic vistas as the setting sun casts a warm glow over the city, or visit the High Line for a sunset stroll at one of New York City’s most unique and charming green spaces. Twice a year Manhattanites, clear weather permitting, are also witness to a breathtaking phenomenon dubbed ‘Manhattanenge’ when the setting sun aligns perfectly with the city’s street grids. 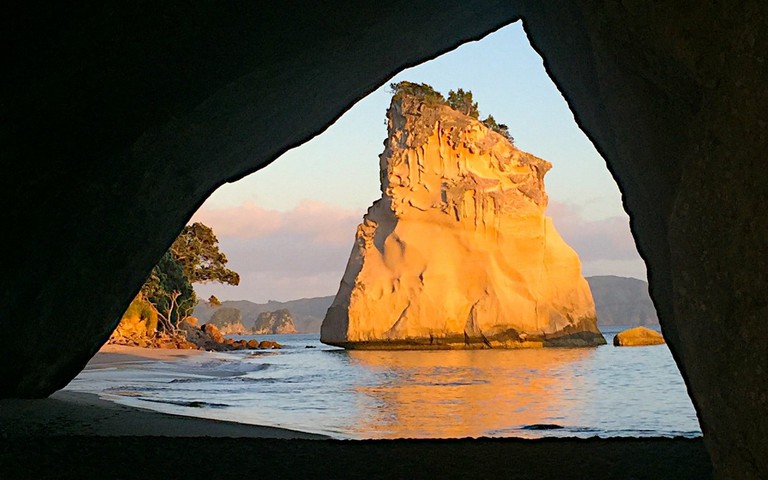 Cathedral Cove
The Coromandel Peninsula on New Zealand’s North Island is home to one of nature’s true gems – the Te Whanganui-A-Hei Marine Reserve, or Cathedral Cove as it is better known. Established in 1992 to help protect the rich marine life of the area’s coastline and surrounding islands, Cathedral Cove is home to several rock formations set against a captivating background of astonishingly clear blue water – a simply stunning locale to watch the sun go down. Take up position at Cathedral Cove’s dramatic rock arch for a perfectly framed shot of the setting sun as it casts a warm glow over the neighboring Te Hoho Rock and glistening Pacific waters.

One of Britain’s most iconic landmarks, Stonehenge’s history spans 4,500 years and is intrinsically linked to the sun. In fact, though many theories abound as to the original usage of the stone circle from a Druid temple to a coronation site for Danish kings, the most generally accepted theory is that Stonehenge is a prehistoric temple built in alignment with the sun’s movements. During the winter solstice, Stonehenge offers an awe-inspiring sight when the setting sun is perfectly aligned between the stones of its tallest trilithon and many sunset-chasers gather to see a spectacle witnessed in Britain for millennia.