10 Artworks By Whistler You Should Know 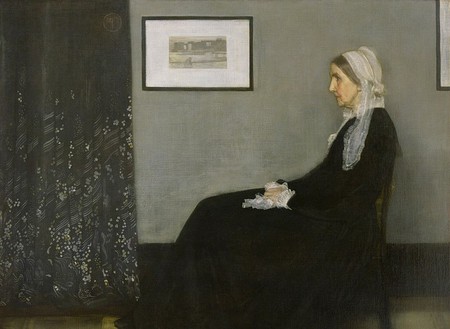 American-born painter James Abbot McNeil Whistler – celebrated for his distinctive portraiture and nocturnal scenes of London – settled in England in the late 1850s, where he became a leading figure in the late-19th Century British aesthetic movement, known for its motto “art for art’s sake.” We take a tour of Whistler’s oeuvre, from the oft parodied ‘Whistler’s Mother’ to his controversial ‘Nocturne in Black and Gold: The Falling Rocket’.

Arrangement in Grey and Black No. 1

Not only is ‘Arrangement in Grey and Black No. 1‘ (known more popularly by its moniker ‘Whistler’s Mother‘) one of the artist’s best known works, it is also one of the art world’s most iconic works. Painted in London in 1871, the work was considered radical at the time of its creation for its unsentimental portrayal of the artist’s mother, Anna McNeil Whistler. Whistler however, insisted that the identity of his sitter was secondary to the painting’s aesthetic arrangement of shape and color. An oft-parodied work, the painting has been spoofed in popular culture from The Simpsons to a 1987 Nike advertisement. 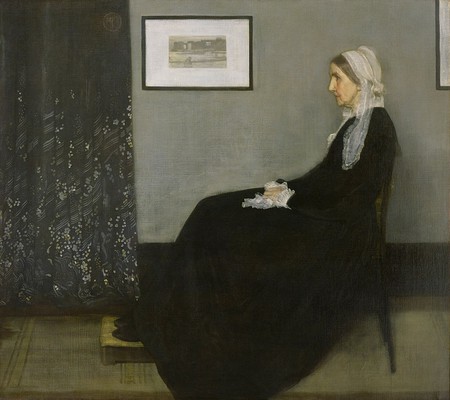 ‘Nocturne: Blue and Silver – Chelsea‘ is the very first of Whistler’s Nocturnes, a term the artist adopted to de-emphasize a painting’s narrative and give prominence to its arrangement of form, line and color. The painting is a scene of Chelsea, London from across the Thames at Battersea. Whistler’s appreciation for Japanese art is clear in the painting’s uncomplicated composition, sparing use of color, and the use of his trademark butterfly signature – a monogram the artist included as a compositional element in his paintings rather than just a hallmark and would elaborate on over the course of his career. 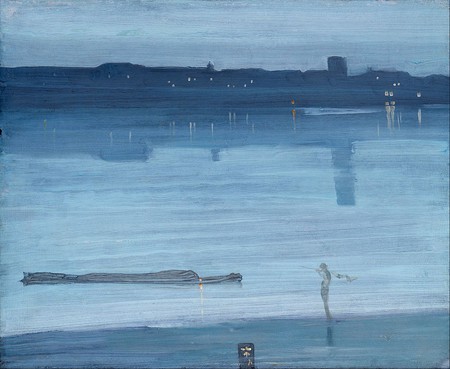 Symphony in White, No. 1: The White Girl

One of Whistler’s first major works, ‘Symphony in White, No. 1: The White Girl‘ was amongst the works famously rejected from the Paris Salon in 1863 and exhibited at the Salon des Refusés – a show which attracted considerable controversy and saw Whistler’s artwork both mocked by the public, yet admired by his French peers including artist Édouard Manet and poet Charles Baudelaire. Featuring the artist’s long-term mistress Joanna Hiffernan as model, the painting was originally titled just ‘The White Girl’, but received its current name when art critic Paul Mantz called it a ‘symphony in white’ – a musical allegory that Whistler would utilize in later ‘arrangements’, ‘nocturnes’ and ‘harmonies’.

Harmony in Blue and Silver: Trouville

Painted in 1865 while Whistler was working alongside French artist Gustave Courbet, ‘Harmony in Blue and Silver: Trouville‘ – which bears resemblance to Courbet’s 1854 painting ‘Les bords de la mer à Palavas‘ and features the figure of Courbet himself – represents a significant turning point in his oeuvre, a time during which he moved more towards his purely aesthetic works and characteristically spare use of color. The painting currently hangs in Boston’s Isabella Stewart Gardner Museum; Whistler, apparently quite attached to the painting, was reluctant to relinquish the work to Mrs. Gardner until, accompanied by a friend, the patron eventually insisted, ‘That’s my picture… you’ve said many times I could have it, Mr. Whistler, and now I’m going to take it’. 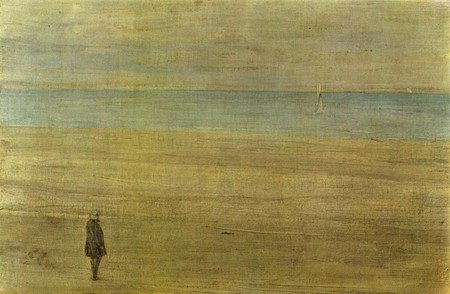 Nocturne in Black and Gold: The Falling Rocket

‘Nocturne in Black and Gold: The Falling Rocket‘ is one of several scenes Whistler painted of Cremorne Gardens, a former popular pleasure garden in Chelsea, London. Quite possibly one of Whistler’s most controversial works, English art critic John Ruskin accused the artist’s pricing of the painting as a ‘coxcomb asking two hundred guineas for flinging a pot of paint in the public’s face’, after the work was first exhibited at London’s Grosvenor Gallery in 1877. The following year, Whistler would sue the critic for libel in an infamous trial in which the artist won, but was awarded a paltry farthing in nominal damages. 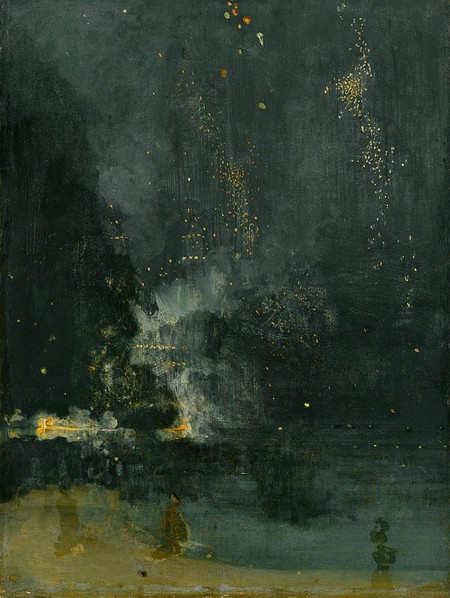 Harmony in Blue and Gold: The Peacock Room

Wealthy Liverpudlian industrialist and frequent patron of Whistler, Frederick Richards Leyland, commissioned the painter to decorate the dining room of his London home – which Leyland had originally hired British architect Thomas Jeckyll to design, in order to showcase his collection of Chinese porcelain. The resulting ‘Harmony in Blue and Gold: The Peacock Room‘ famously led to the end of Whistler and Leyland’s relationship, when Whistler apparently took his artistic license a little too far and painted over costly antique Dutch leather with his designs. Dismantled in 1904 and moved to American industrialist and art collector Charles Lang Freer’s Detroit home, Whistler’s Japanese inspired interior is today installed at the Smithsonian Institution’s Freer Gallery of Art in Washington DC. 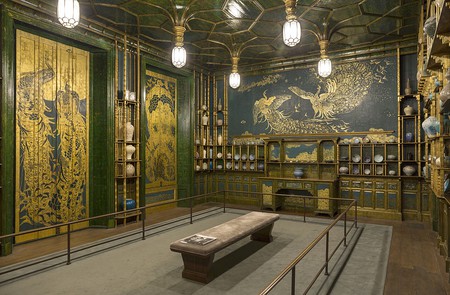 The Princess from the Land of Porcelain

Originally given pride of place above the fireplace of commissioner and British shipping magnate Frederick Richards Leyland’s Whistler-painted dining room, ‘The Princess from the Land of Porcelain‘ today hangs in a faithful reproduction of The Peacock Room in Washington DC’s Freer Gallery of Art. Featuring Christine Spartali, a noted Anglo-Greek beauty of the 1860s, the painting’s composition – a Western women fitted out in Japanese attire and surrounded by Oriental props – is testament to the influence of both Japanese art and Chinoiserie – an 18th century European interpretation of Eastern art – in Whistler’s works. 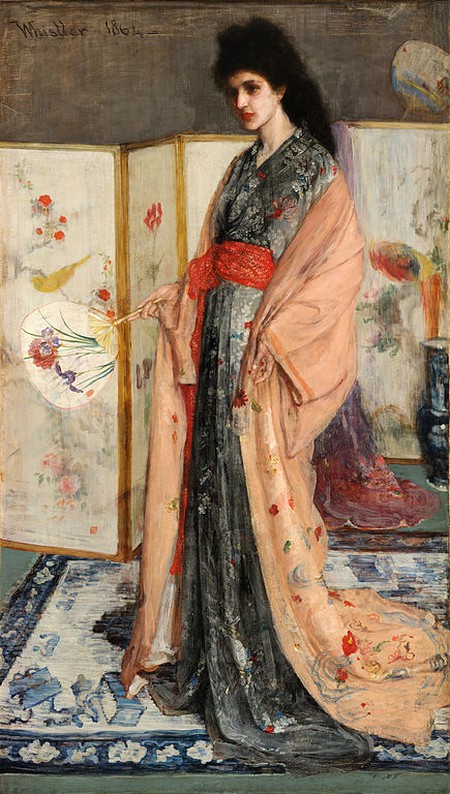 Another of Whistler’s controversial paintings, ‘Nocturne: Blue and Gold–Old Battersea Bridge‘ was – alongside ‘Nocturne in Black and Gold: The Falling Rocket’ – one of the works produced as evidence during the infamous 1878 Whistler-Ruskin libel trial. During the trial, the presiding judge, Baron Huddleston, asked of Whistler, ‘Which part of the picture is the bridge?’ much to the amusement of the court. Irish writer Oscar Wilde denounced the work during its 1877 exhibition as ‘worth looking at for about as long as one looks at a real rocket, that is, for somewhat less than a quarter of a minute’. 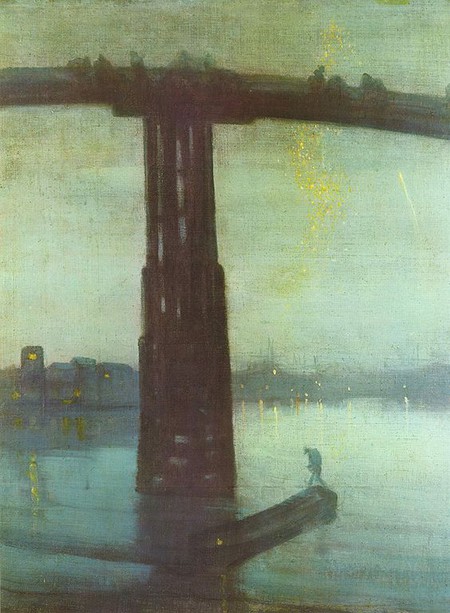 Created between 1858 and 1859, ‘At the Piano‘ was Whistler’s first major oil painting and is widely regarded as the artist’s first masterpiece. First exhibited in 1860 at the Royal Academy of Arts in London, the work features Whistler’s half-sister, Deborah Delano Haden playing piano and her daughter, Annie Harriet Haden, listening. The painting found a buyer in Scottish artist John Phillip, but today, the painting is part of the permanent collection at Cincinnati, Ohio’s Taft Museum of Arts. 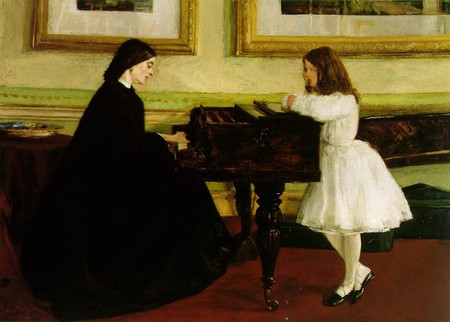 Symphony in White, No. 2: The Little White Girl

A later ‘symphony’ of Whistler’s, ‘Symphony in White, No. 2: The Little White Girl‘ was first shown at a 1865 exhibition at London’s Royal Academy of Arts, and again features the artist’s mistress Joanna Hiffernan as model. This time, Hiffernan poses in sad contemplation, leading critics to draw comparisons with Spanish painter Diego Velázquez’s mid-17th century work, ‘The Rokeby Venus‘. English poet Algernon Charles Swinburne felt compelled to pen a ballad, ‘Before the Mirror‘, after viewing the painting, while a third Whistler ‘Symphony in White‘ resides at Birmingham, England’s Barber Institute of Fine Arts. 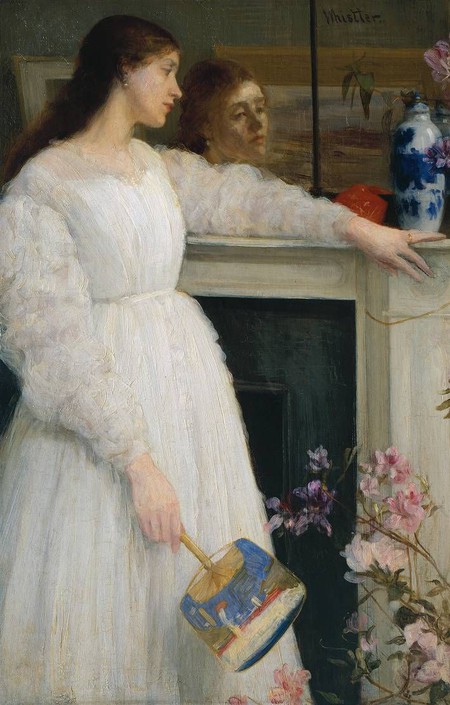