10 American Ghost Towns You Can Visit

Bodie Ghost Town Storm | © Photographersnature/WikiCommons
During the 19th century, expansion across the American West led to the development of several towns, many of which were built upon resources like silver and gold. When these resources ran out, residents fled only with what they could carry, leaving behind remnants of civilization. Although weathered by years of desolation, many of these structures remain intact; some are even considered to be haunted by the spirits that once resided in them. For a spooky detour, here are ten American ghost towns you can visit.

Bodie, a State Historic Park, was once a gold mining town founded after Waterman S. Body, who discovered gold in the hills just north of Mono Lake in 1859. Unfortunately, Body died before he was able to see the town for which he was named after. The purchase of a mine in 1877 caused people to flock to Bodie (a misspelling that stuck), and at its peak, the town had a population of nearly 10,000 people. Preserved in a state of ‘arrested decay,’ visitors can take a walk down the deserted streets and peer into the interiors of the buildings, which have remained exactly as they were left. But, be weary of taking anything with you – this ghost town is said to curse anyone who steals from its premises.

Founded in 1892, Goldfield was a booming gold town boasting several buildings, including three saloons, a general store, a brewery, a boarding house, a butcher shop, a blacksmith shop, a school, and even a post office. The discovery of high-grade ore in the hills between the Superstition and Goldfield Mountains led to an influx of new miners, and within five years, there were 1,500 people residing in the city; however, after the quality of ore plummeted, the town began to die off slowly. Many attempts to revive it were made between 1910 and 1926, but none of them were successful. Goldfield has since been reconstructed into a tourist attraction with tours, Old West reenactments, and a history museum. 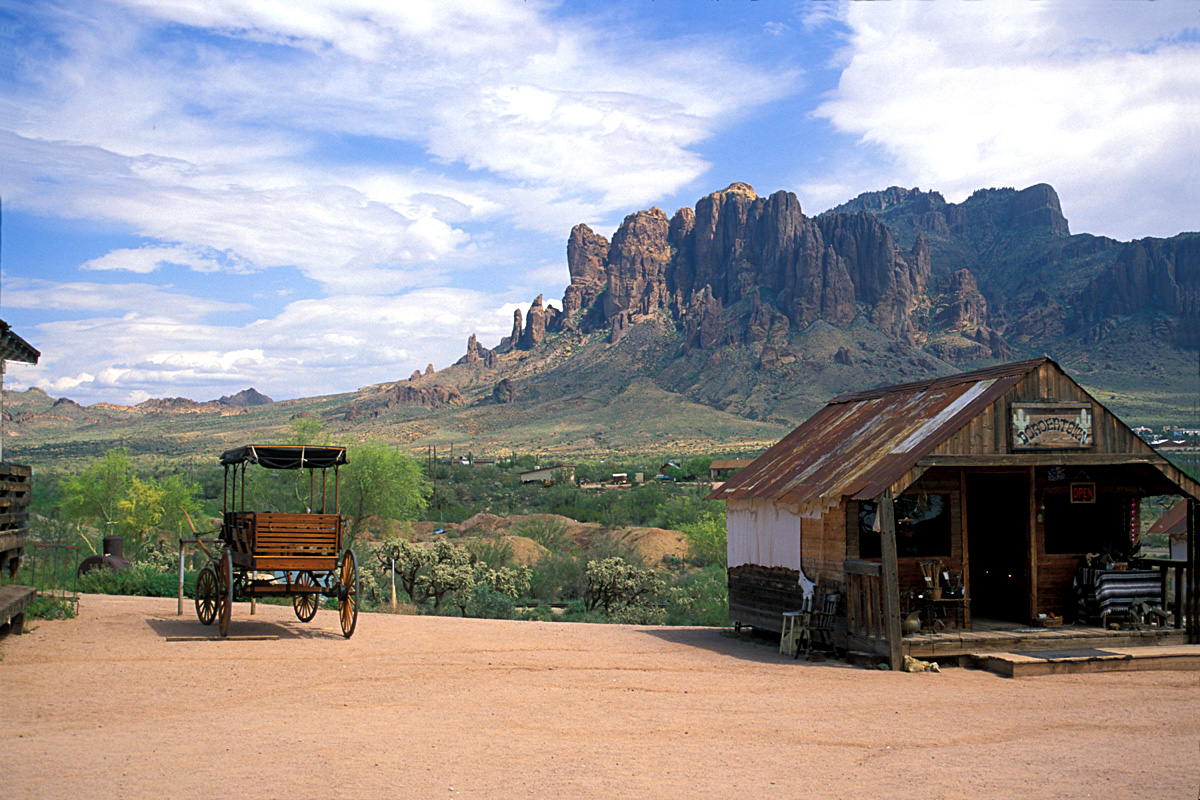 Gold and silver mining brought many folks to St. Elmo after it was established in 1880. There were over 150 mine claims in the area, and a train line was constructed to pass through the town on its way to Hancock. The town flourished in the 1870s and was filled with hotels, a school, a dance hall, and a telegraph office. Considered a ‘hub town’ for supplies arriving by train, St. Elmo was severely hurt when the railroad closed in 1922. Rumor has it that people of St. Elmo took the last train out of town, and never came back. You can still visit the town, which has a general store (open during summer) and ATV rentals; there’s even a rustic cabin should you decide to stay.

A thousand people once resided in this mining town, named for the semi-precious stone found in the nearby mountains; Garnet, however, wasn’t built to last. The town grew around a stamp mill that was erected in 1895, and after striking a vein of ore, Garnet boomed. There were stores, hotels, stables, barber shops, a school, a butcher shop, a doctor’s office, and 13 saloons. But, by 1905, gold ran out, and mines were abandoned, and a fire in 1912 leveled much of the town. Despite its short-lived revival in the 1930s, Garnet was lost by the 1940s.

After the discovery of gold on Grasshopper Creek in 1862, many people rushed to Bannack in hopes to strike it rich. Just two years later, Bannack was named the first Territorial Capital of Montana; however, gold was found near Virginia City shortly after, and many residents moved to the city along with Bannack’s recent title. Those who stayed behind continued to mine in the area, and the town survived until the 1930s; it wasn’t until the 1950s that it was completely abandoned. Montana quickly declared the town a state park, and today, it preserves over 60 structures, which visitors are welcome to explore.

An old silver mining town from the 1880s, Calico once had as many as 500 mines, producing over $20 million in silver over 12 years. As silver lost its value in the mid-1890s, Calico lost most of its residents, with many miners packing up and leaving town; it was a ghost town by the turn of the century. In the 1950s, Walter Knott of the famed Knott’s Berry Farm purchased Calico, restoring most of the buildings to their original stature. A State Historical Landmark and part of the San Bernardino County Region Parks system, Calico is proclaimed as ‘California’s Silver Rush Ghost Town,’ and visitors can delve into the town’s history amongst other attractions, including gold-panning, a train tour, a ‘mystery shack,’ and a mine tour.

Animas Forks is a trek to get to, but it’s worth the trip. Renting a four-wheeler is advised, as arriving at this former gold and silver mining town in the San Juan Mountains requires an ascent of 11,200 feet through rugged terrain. Said to have been the ‘largest city in the world’ (at this altitude), Animas Forks established roots as a mining camp by 1877. There were several stores, a hotel, offices, and shops, but with the frequent danger of avalanches, travelers stopped coming; the town didn’t survive to see the next century. Visitors can still see some of the remaining buildings, amongst beautiful mountain scenery.

This old mill town, established in 1903, was a bustling mine camp from 1911 to 1938 when it produced $200 million worth of copper ore. However, as soon as the area was mined out and railroads closed, the remote Kennecott became a ghost town. Visitors can still see the red mill building from the former Kennecott Copper Company – one of the world’s largest mineral companies – situated above the Kennicott Glacier (a clerical error a century ago that led to its current misspelling). And, if you get yourself a guide, you can actually explore within the building itself.

Named for the local pink-tinged volcanic rock, Rhyolite was established in 1904 after quartz was found in the nearby hills. Thousands headed to the region hoping to get their hands on some of the prospected gold, and buildings sprung up everywhere including hotels, shops, a school, two electric plants, and a hospital. Rhyolite even had its own stock exchange and Board of Trade alongside a well-established red light district. Although Charles Schwab purchased the Montgomery Shoshone mine in 1906, the financial panic of 1907 caused many mines to close and failed businesses; the town officially shut down in 1916. Today, you can still see walls of former buildings, along with the (recently restored) Bottle House comprised of 50,000 beer and liquor bottles.

Rhyolite Mercantile, an abandoned general store, burned to the ground in September 2014 after being hit by lightning © Pierre Camateros/Flickr

Spooky doesn’t even begin to describe the hair-standing chills this ghost town gives those who visit. The former capital of Alabama (1819-1826), Old Cahawba was once a thriving antebellum river town, later serving as a distribution point for cotton and prison for Union soldiers, but after the Civil War (and numerous floods), it didn’t survive. Although it was abandoned, Cahawba was used as a meeting place for freed slaves during the Reconstruction, but it was never fully revived. Visitors can explore many of its historic ruins today, which includes abandoned streets, cemeteries, and many other early 20th-century buildings.