The Top Things to Do and See in Quapaw Quarter, Little Rock 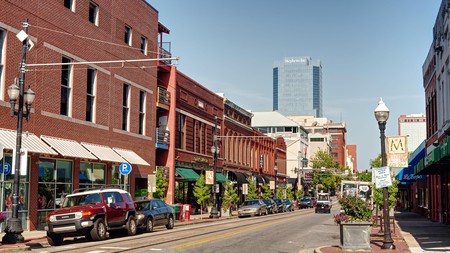 The Quapaw Quarter, in Little Rock, encompasses the entirety of downtown Little Rock. The old idea of it being only the Governor’s Mansion District is now gone, and Quapaw Quarter presents you with the best of best from this Arkansas city. Whether you’re looking for history, art, a good meal or a drink, you can find it all here.

Founded in 1976, the Arkansas Repertory Theater entertains folks from all age ranges and backgrounds with its stage productions that show life as it is. The dramatic storytelling illustrating life’s journey are played by guest artists from all over the country. It is located in one of Little Rock’s most famous historic buildings, and it fits a total of 484 people between its main and second stages. The Repertory Theater is the state’s largest non-profit theater company.

Located in the Tower Building of the Little Rock Arsenal, the MacArthur Museum of Arkansas Military History was created to proudly show the state’s military heritage from its territorial years until now. The Tower Building is the birthplace of General Douglas MacArthur and the museum exhibits artefacts, photographs, weapons, uniforms, and more.

The first Fine Arts Club of Arkansas was formed in 1914. The museum of Fine Arts was created in 1937 in Little Rock’s MacArthur Park, and the Arkansas Arts Center was founded in 1960. Although it took a few years, the Center today has a rich collection of art inspiring learning and creative expression. The collection is constantly updated and easily accessible to people from all ages and backgrounds. As you go through the Arts Center, keep in mind that Arkansans have their own sense for art and culture, and look for it.

The Bernice Garden is a true gem in downtown Little Rock. The name hides decades of history and multiple businesses beneath it, such as the Little Rock Inn during the 1940s, followed by the Captain D’s fast food restaurant, and after its burning the building served as the home of businesses on the bottom floor and renters on the top. Today the gardens beautify the Quapaw Quarter district of Little Rock and stand as a sign of community and sustainability. Watch out for the Gardens events, but mostly for the farmer’s market lasting from mid-April until mid-November and the Vintage Market held every second week between April and October.

The Governor’s Mansion is “the home of the people of Arkansas” that symbolizes the state’s rich history and the dedication of serving others. For 40+ years, the Governor’s Mansion has been used for the first family’s public events, dinners and other celebrations. The fact that 45 of Arkansas’ governors have lived in this building proves its historical importance and value to Arkansans. The interior of the mansion is closely preserved in its original architecture, and the Governor and his wife welcome anyone and everyone to swing by and experience true Southern hospitality.