16 Incredible Things You Can Only Do in Arkansas 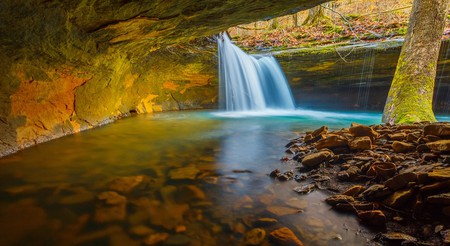 Arkansas isn’t called the ‘Natural State’ for nothing – any travel guide will tell you that the southern state is famous for its abundant wilderness, hot springs, mountains, rivers and caves. However, here are our top picks of the more unusual sites that are completely unique to Arkansas – we guarantee they will not disappoint.

One of America’s most coveted wedding locations, the Anthony Chapel is a striking, tall building nestled deep in the Garvan Woodland Gardens in Hot Springs. The chapel’s tree-like wooden beams shoot up into the forest, while the glazing between them make the space feel completely open to the surrounding woodland. Unless a wedding is taking place, which happens almost every weekend, the space is serene and incredibly zen.

Doe’s Eat Place in Little Rock will forever remain in the history books thanks to the 1992 Presidential campaign, when Bill Clinton and his team made it their hangout spot. A Rolling Stones interview with the then-candidate was even conducted there. The restaurant’s chef at the time confirmed President Clinton’s favourite dish: “The Governor always eats jalapeno cheeseburgers, lettuce, tomato, mayonnaise, pickles and onions.” Good news: you can still get the famous cheeseburger, albeit without the jalapenos, for under $10. 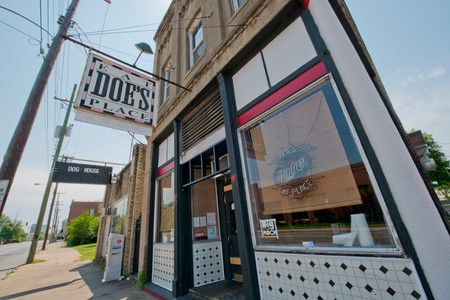 #3. Stand on the edge of the world at Hawksbill Crag

A sharp rock jutting out of the forest walls, Hawksbill Crag must be among the most scenic places in Arkansas. The state’s most popular proposal spot (probably) looks out on to Buffalo River scenery in all of its grandeur. The best time to visit is early in the morning, before the tourists and photographers descend on this hidden gem. 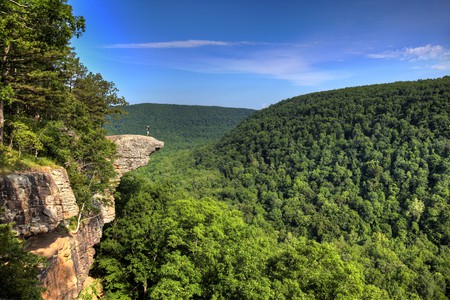 #4. Give up a fish for adoption

The Flying Fish in Little Rock is probably the world’s only restaurant where you could also give up your Billy Bass toy (one of those horrific singing wall decorations so popular in the 1990s). Rueful owners can sign some adoption papers, get their fish hung on one of the restaurant’s walls and get a free catfish basket in return. Deal done.

This guest said it all:

We probably don’t need to explain that possum pie doesn’t actually contain any possum meat. This glorious jumble of pecans, cream, chocolate custard and cream cheese may be one of the sweetest things you’ll ever eat – it’s an unmissable signature dish in the state. Almost every town has a favourite, but some of the most highly recommended possum pies can be found at Sassy’s Red House in Fayetteville, Myrtie Mae’s in Eureka Springs, or the Patti Cakes bakery in Conway. 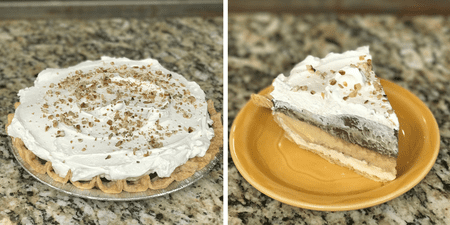 The Glory Hole waterfall in the Ozarks National Park is perhaps one of the most otherworldly things to see in the state. A creek running through the park has literally drilled a hole through the rock, forming a 30ft-high waterfall that runs from ground level into a cave underneath. It’s best to go right after heavy rainfall, when the water really gushes down, or in winter, when the waterfall is frozen into a spectacular icy column. 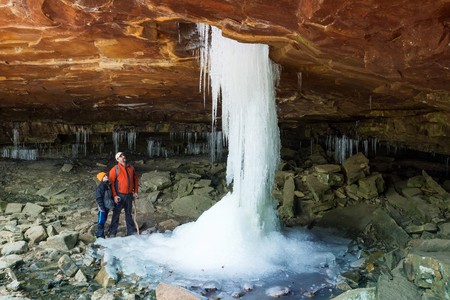 The Walmart Museum in Bentonville may not be the most obvious day out, but in Arkansas, it is prime and obligatory fun. The exhibits follow the history of the world’s largest company, which is headquartered here. Expect to learn about its founder, Sam Walton, and his family’s massive ‘American dream’. Most visitors are particularly impressed by the ice cream at The Spark Café soda fountain, located within the museum walls. Sam Walton’s favourite? The butter pecan flavor. 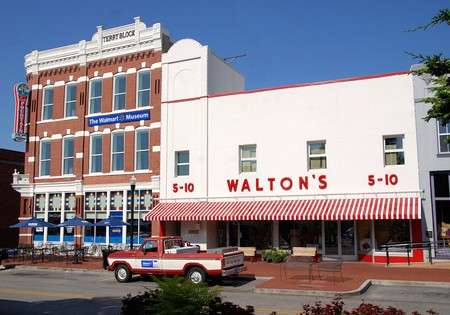 #8. Stay in America’s ‘most haunted hotel’

The 1886, Crescent Hotel & Spa in Eureka Springs is the self-proclaimed ‘most haunted hotel’ in the country. Once a cancer hospital run by a crook doctor, today the Victorian building is home to several ghosts, including medical staff from the time. If you want to find out once and for all whether ghosts exist, you can take part in a night-time tour of the property or even stay for the night. A recent guest reported being “awakened by someone pulling on the bed sheets.”

#9. …or sleep in a vintage Texaco gas station

This 1930s art deco gas station is now a quirky, well-kept secret in Eureka Springs. Despite the memorabilia hosted in the rooms, you don’t necessarily notice the gas-station heritage. Maybe for the better.

#10. …or even a magical castle treehouse

Yup, it’s a castle that is also a treehouse. Sitting 12ft in the air, the castle-cum-treehouse combines the best of forest lodging with medieval European heritage – the inspiration was borne out of the owner’s love of the Harry Potter books and her visit to Alnwick Castle (the location used for Hogwart’s Castle in the film series). Starting at $140 per night, we think it’s a pretty good deal. This Eureka Springs compound also features other quirky accommodations: standard treehouses, hobbit caves an enchanted forest caverns. 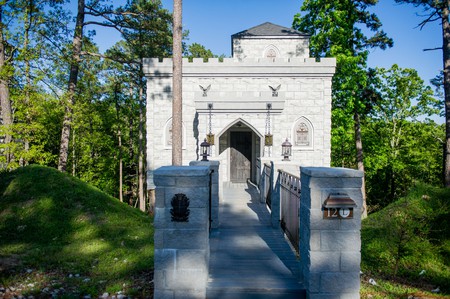 #11. Dig for your own diamonds

The Crater of Diamonds State Park offers a pretty unique adventure to any treasure hunter – diamond mining. Don’t be sceptical: every once in a while, a valuable gem does get picked up at the eighth-largest diamond mine in the world – a pretty good return on investment, as the entry ticket is under $10. As the park’s policy goes, ‘finders, keepers’!

#12. Visit another state via the USA’s longest pedestrian bridge

The Big River Crossing opened to cyclists and pedestrians in October 2016 with much cause for celebration: it is now officially the longest bridge of its kind in the country. The mile-long crossing takes you from West Memphis, AR, right into the heart of Memphis, TN, over the great Mississippi River. Excuse for a casual out-of-state lunch, anyone?

#13. Visit an exact replica of the White House’s Oval Office

Any ‘Billgrimage’ in Arkansas wouldn’t be complete without a visit to the Oval Office at the Clinton Presidential Center. While this isn’t the real deal, the exhibit show exactly how the Presidential office looked during Bill Clinton’s tenure, blue carpet and all. The biggest wow factor? You can get your picture taken behind the replica Resolute desk.

Can you tell the real from the replica? | © Adam Jones, Ph.D./WikiCommons & Executive Office of the President of the United States/WikiCommons

#14. Sip wine in one of the least-known USA wine regions

Little-known fact: Arkansas hosts three American viticultural areas, which are all part of the Ozark Mountains. The tiny town of Altus is the state’s self-pronounced wine capital, with several wineries and plenty of wine-related events happening year-round. Where to go? The Wiederkehr Wine Cellars are among the oldest in the region, with a history going back to the late 19th century, while the Chateau Aux Arc Winery boasts the largest US Chardonnay vineyard outside of California. 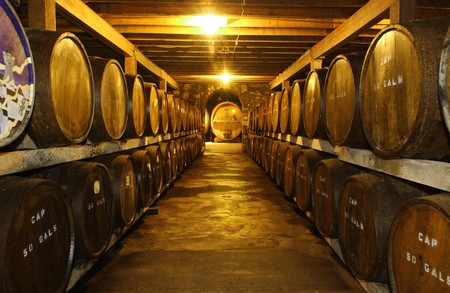 Marshes, wetlands… Both horrible words. But who cares when they look like this? 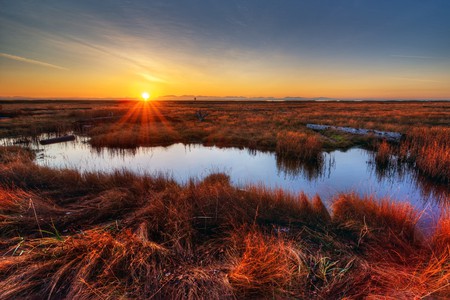 Bayou Bartholomew is more than 350 miles in length, making it the longest in the world, but also one of the most bountiful in America. Catfish and bream fishing are the activities of choice here. Inexperienced fishermen can rent a kayak and take in the diverse landscape around them during a casual river stroll. 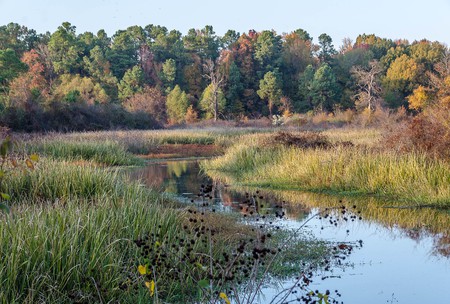