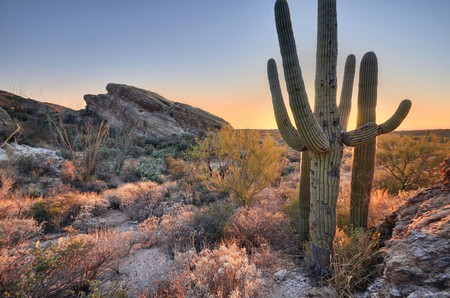 The spectacular and expansive desert scenery of Arizona can sometimes be forgotten amidst the hustle and bustle of everyday city life. When you’re looking to escape from the metropolitan monotony of a long work week in Tucson, you need’t go far to find a natural paradise. Majestic foothills, towering cacti, beautiful waterfalls and creeks, stunning floral landscapes, and amazing local wildlife are just some of the wonders you’ll see when you explore our picks for the prettiest parks in Tucson. 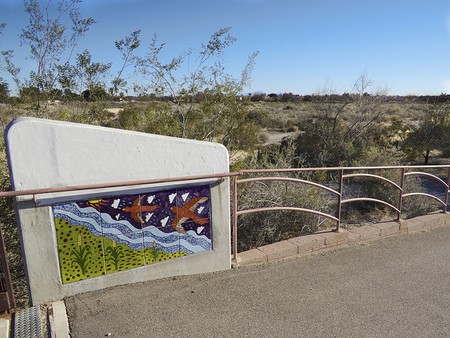 With a trail that wraps around most of the city, Rillito River Park offers miles and miles of paved path along the river, suitable for walkers, bikers, and runners alike. There are numerous entrances onto the path, as well as plenty of bathrooms and water stops, making it the ideal hike for anyone in the area. Although there’s no water in the river due to its being in the desert, the park’s visitors are treated to gorgeous views of plants and mountains visible from almost everywhere on the trail. There are bridges that cross over the river every mile or half mile, as well as clear signs marking the distance to each major street, helping runners keep track of how far they are running. Equestrians and dog walkers also love the park, thanks to the abundance of shading, playgrounds, grass, water fountains, and dirt trails. Everything is well-maintained and safe, so many locals enjoy taking leisurely strolls with their kids on weekends or going there for their early morning jogs. Rillito is the perfect place to go when you’re looking to escape the city without even having to leave it, surrounding its visitors with beautiful scenery and occasional wildlife that give it a serene meditational atmosphere.

In the eastern foothills of the Santa Catalina mountain range, Sabino Canyon is a world of natural beauty. Stunning vistas, the freshness of the morning air, the tranquility of running creek water, and the rugged backdrop of Thimble Peak make this place truly unique. Offering some of the best hiking trails in Tucson at all levels of difficulty, Sabino Canyon shows off the breathtaking beauty of Arizona’s natural desert wildlife. One of its most popular trails is the Seven Falls trail, a fairly easy ten mile hike culminating in an incredible view of the waterfalls for which the trail is named, a view that is most impressive after monsoon season. If the walk from the parking lot to the trailhead, which actually comprises most of the hike, is too much for you, there is also a tram you can take to get you closer. The tram ride is also nice for folks who want to see what the canyon offers but don’t want to or can’t hike, as it includes informative facts from the driver all the way into the canyon. Visitors also enjoy bringing a bathing suit to take a dip in the beautiful creek, and locals love taking family and out-of-town guests to the park to really show off all the beauty of Southern Arizona.

The city’s most centrally located park, the Gene C. Reid Park features a large lake and small pond and waterfall with abundant grass and trees. The pond area in Reid Park is around the waterfall, and although there is no covered structure at the lake area, guests can reserve a nearby ramada. The park is also home to the famous Reid Park Zoo, where visitors can explore naturalistic habitats housing hundreds of exotic animals from around the world. In addition, Reid Park guests are treated to a beautiful and colorful rose garden, with a large gazebo surrounded by over 100 species of roses and more than 800 individual plants. The roses and plants typically bloom in the spring and the fall with an exquisite beauty that makes the garden one of the city’s most popular wedding sites. Boasting 1,080 different color rose beds, the rose garden is the result of a partnership between The Rose Society of Tucson and the City, who for many years have developed and promoted the garden. Guests can obtain a free layout plan at the garden, which indicates the location of various rose species and lists the best rose varieties for the Arizona desert climate.

Sitting at the base of the majestic Santa Catalina Mountains, Catalina State Park is a haven for desert plants and wildlife, as well as nearly 5,000 saguaros. The 5,500 acres of foothills, canyons, and streams invite camping, picnicking, and bird watching with more than 150 species of birds that call the park home. The park provides miles of equestrian, birding, hiking, and biking trails that wind through the park and into the Coronado National Forest at elevations near 3,000 feet. Located within minutes of the Tucson metropolitan area, Catalina State Park is home to facilities that include a campground, picnic tables, grills, trails, an equestrian center, a group use area for day or overnight use, restrooms, showers, and even a gift shop, as well as a cool area where local musicians often get together and play for free. If you enjoy horseback riding but don’t have a horse of your own, you can stop by Pusch Ridge Stables, an equestrian concessionaire near the park that offers horse rides on designated trails at the north end of the park. Visitors are encouraged to bring along their curiosity and sense of adventure as they take in the beautiful mountain backdrop, desert wildflowers, cacti, and wildlife that call this area home.

Home to the nation’s largest cacti, Saguaro National Park is the place to go to see the giant saguaro, the universal symbol of the American west. These majestic plants, found only in a small portion of the United States, are protected by Saguaro National Park, to the east and west of the modern city of Tucson. There, visitors have the chance to see these enormous cacti, silhouetted by the beauty of a magnificent desert sunset. The park is composed of two distinct districts: the Rincon Mountain District and the Tucson Mountain District. The Tucson Mountain District lies on the west side of the city, while the Rincon Mountain District lies on the east. Both districts were formed to protect and exhibit forests of their namesake plant, the saguaro cactus. The Tucson Mountain District of the park ranges from an elevation of 2,180 feet to 4,687 feet and contains two biotic communities, desert scrub, and desert grassland, as well as desert wildlife including the coyote, Gambel’s quail, and desert tortoise. The Rincon Mountain District ranges in elevation from 2,670 feet to 8,666 feet and contains six biotic communities, including desert scrub, desert grassland, oak woodland, pine-oak woodland, pine forest, and mixed conifer forest. Visitors to the Rincons may also be treated to sights of animals like the black bear, Mexican spotted owl, Arizona mountain king snake, and white-tailed deer.