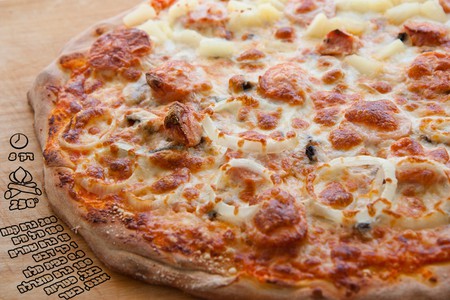 That old dad joke about frying an egg on the sidewalk? Some Phoenix journalists took it a step further yesterday.

Phoenix, AZ, has been seeing some warm weather this week, and it’s been causing some problems. It was too hot yesterday for smaller aircraft to physically get aloft, so flights were cancelled. The KFC sandwich remains earthbound. And, in yesterday’s 120-degree heat, an enterprising group of newspaper reporters (a profession known for its love of pizza) set a frozen supermarket pizza outside, in a parking lot, on a bed of aluminum foil to see whether it was hot enough for the pizza to cook in the sun to an edible state.

Reviews are in. @rachelleingang says it “tastes like gas station breadsticks.” @_KECampbell noted that “it doesn’t taste like pollution.” pic.twitter.com/TNbe6mlhc7

It took about two and a half hours for the cheese to melt and the crust to puff. “If you eat just the cheese, it’s really good,” said one intrepid and hungry newspaper employee. ”It’s not as poisonous as I expected. I’m not tasting the pollution,” commented another.

The overall verdict? Not bad, they said.

The parking lot pizza prepared by @phoenixnewtimes was still better than like half of the fully cooked frozen pizzas I’ve had in my life.

A Fresno, CA paper’s rival attempt to bake cookies on a car dashboard did not go as well, however.