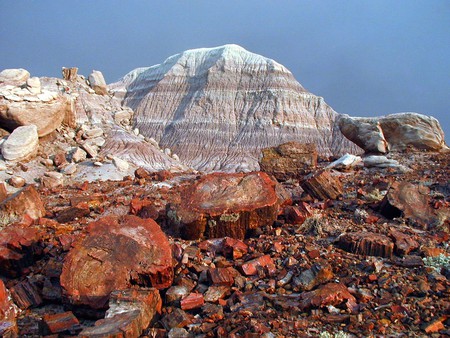 In spite of what its name suggests, this is one forest that’s anything but lush. But this wasn’t always the case.

Populated with more fossilized trees than almost anywhere else on the planet, Arizona’s Petrified Forest National Park is an other-worldly landscape where colorful badlands share turf with ancient logs dating back 200 million years. From the petroglyphs and the dinosaur fossils to the park’s namesake ‘forests,’ this unique landscape provides a glimpse into North America’s prehistoric past. 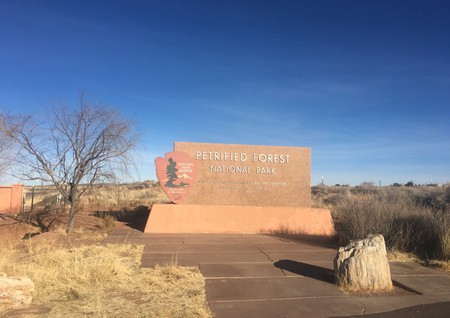 With an almost eerily quiet and vast landscape that looks more like Mars than Arizona, the Petrified Forest offers a fossilized look at a prehistoric time. Fallen logs dating back 225 million years form the ‘forest,’ illuminating the desert expanse with hues of red, purple and blue. At one time, these trees soared upwards of 200 feet (60.9 meters) over a sub-tropical wilderness. Collapsed by rising rivers, these ancient giants were buried in layers of silt and volcanic ash. Over millions of years, trees were fossilized and turned to stone, as water trickling into the silt reacted with volcanic silica to transform the wood into rock. As the eons passed, the sand washed away and the jungles shifted to desert land, the forests emerged once more.

Today, the Petrified Forest consists of several mini forests where vast collections of ancient logs lay scattered across buttes and badlands. Some areas of the park, like the Rainbow Forest and Painted Desert, exhibit a kaleidoscope of color thanks to high portions of minerals like cobalt and chromium. Altogether, the park boasts among the largest collections of petrified wood on Earth. 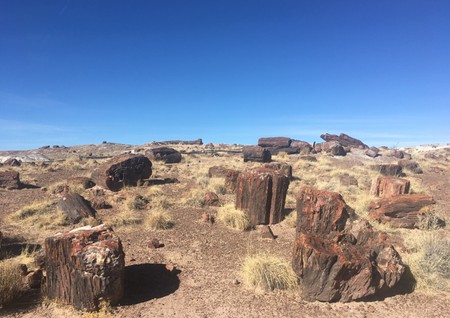 Fallen trees, some more than 200 million years old, are relics of an ancient era | © Matt Kirouac

Hundreds of millions of years ago, the forests were located near the present-day Equator, providing habitat for a thriving ecosystem. This included not only the redwood-size trees but also dinosaurs of all shapes, sizes and diets. Chief among them was the area’s leading predator, a giant crocodilian that would make today’s reptiles look like tadpoles by comparison.

Fast-forward some 200 million years, and the forest once again served as a home for new civilizations. There’s evidence of cultures living here as far back as 2,000 years, with lingering remnants left behind via petroglyphs on rocks. A visit to modern Newspaper Rock reveals a display of hundreds of petroglyphs, most of which are still a mystery.

The Puerco Pueblo Trail is an easy jaunt to an ancient village that was constructed around 1300 using mud and wood. Trail signs and displays hypothesize about what life was like during that time and what various sections of the village functioned as. The most well preserved of all the park’s villages, Puerco Pueblo features numerous doorless rooms surrounding a central plaza that served as a community gathering place. 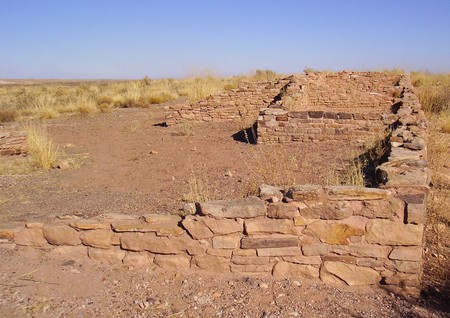 Thanks in part to the fact that iconic Route 66 cuts through the park, making it the only national park in the nation containing a section of the historic route, the Petrified Forest is one destination that’s particularly suited for road trips.

The focal point of the park is the main Park Road that winds for 28 miles (45 kilometers) from the Painted Desert Visitor Center in the north to the Rainbow Forest Museum in the south. It makes for an easy scenic detour for passers-by, especially considering its short hiking trails and photogenic pull-offs.   Visitors can start with a trip to the visitor center, where exhibits, a bookstore and an orientation film paint an overview of the park. From here, swing by the Painted Desert Inn National Historic Landmark, a former lodge-turned-museum that casts a spotlight on the area’s history as a Route 66 mainstay. 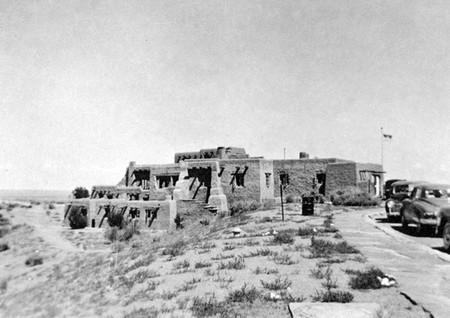 The Petrified Forest has long been a popular stopover for travelers, thanks to its proximity to Route 66 and destinations like the Painted Desert Inn | © Petrified ForestNPS / Flickr

While the park is well regarded for its scenic drives, there’s plenty more to explore on foot.

Of the park’s seven designated paths, none exceed three miles (4.8km) in length, and all are easy treks for casual strolls. These hikes get visitors up close and personal with the park’s most stunning log displays.

The Blue Mesa Trail is a must-do loop walkway that starts atop a ridge of blue-hued badlands (they earn their tint from deposits of vibrant bentonite) before descending to the desert floor. Along the way, scattered logs shimmer in the shadows, providing a striking juxtaposition of stone wood and colorful buttes.

Another popular hike is the Giant Logs Trail, which displays the largest specimens in the park. Here, mighty logs include ‘Old Faithful,’ a massive log that’s approximately the width of a bus.

For those looking to hoof it a little longer, Petrified Forest contains 50,000 acres of backcountry wilderness. Visitors are free to hike and camp as they please, but should go prepared with plenty of water, sunscreen, food, layers and a map – GPS is spotty at best. Horseback-riding is another option, but it’s BYO horse, with riders restricted to the backcountry area in the northern half of the park.

The park is also book-ended by museums, including the captivating Rainbow Forest Museum at the southern terminus. Here, visitors can learn more about the area’s subtropical past, including dinosaurs and ancient flora.

Altogether, from the lustrous trails to the fossil-filled museums, Petrified Forest is a landscape like no other, with ties to both prehistoric epochs and more modern-day Americana via Route 66. Undoubtedly, it’s a destination worth a detour. 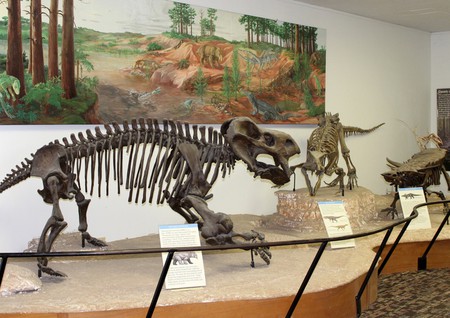