This Alaskan City is Home to the World's Largest Chocolate Waterfall 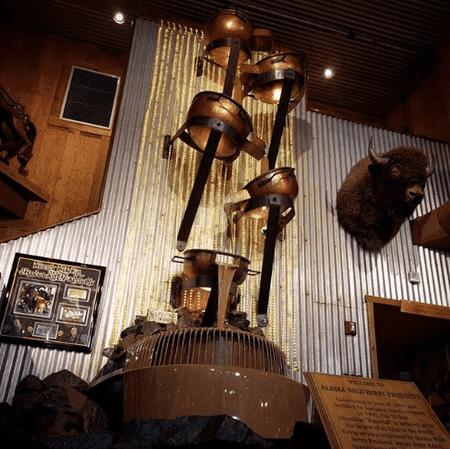 Guinness World Records has oodles of chocolate-themed titles, ranging from biggest truffle and largest chocolate bar by area to largest chocolate sculpture and fastest time to eat a Chocolate Orange. It doesn’t have a verified largest chocolate waterfall, but if it did, it would likely be the 20-foot-high, Willy Wonka-esqe wonder at Alaska Wild Berry Park Store in Anchorage, Alaska.

Worlds tallest chocolate fountain 20ft, 3,400 lbs of chocolate. Now where are the strawberries?

Incorporating over 3,400 pounds of chocolate that cascades from a fountain head, down a series of old-school copper candy kettles, before raining down into a massive pool, the waterfall has become a tourist attraction in its own right.

Large chocolate companies, including Nestle and Guittard, now donate the chocolate that is used in the fountain that was designed and built by Homer, Alaska artist Mike Sirl in the ’90s.

While the sheer size of the fall might make you want to pull an Augustus Gloop and swan dive into the swirling pool of melted chocolate, know that the cascading candy is for display only. Don’t be discouraged though – the rest of the store is chock-full of chocolate, candies, salmon, cheeses and jams for sale.