This Alaska Museum Is Dedicated to Hammers 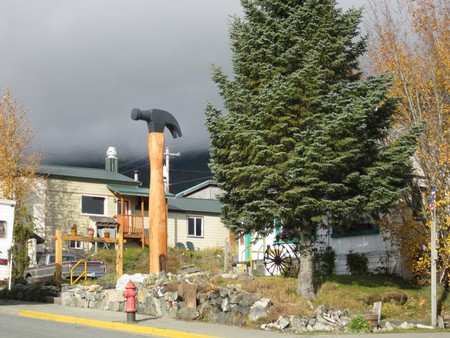 On the main street of the small island community of Haines, Alaska (population just over 1,700), there is a brewing company, a high school, and a 20-foot-tall (six meters) hammer. That hammer belongs to the Hammer Museum, the first museum dedicated to the tool.

It's a gorgeous day and the Hammer Museum is officially open for the summer season. So stop on by! #hammertime

At any given time, there are approximately 2,000 hammers on display and a whopping 7,000 items in their vast collection. This Alaska museum does rotate their pieces throughout the year to ensure that experiences vary from one visit to the next.

Everyone knows what a claw hammer is, but did you know just how many different types of claw hammers there are? This is just a small sampling of the claw hammers we have on display at the museum! #hammers #clawhammer #collection #museumcrushmonday #didyouknow #tools

Founder Dave Pahl established the Hammer Museum in 2002, though the storied history of the museum’s foundation dates back to decades prior.

According to the Hammer Museum website, Pahl had a fascination with restoring old tools (not a bad hobby when you live off-the-grid, as he and his wife, Carol, did for many years). On a trip to the Lower 48, Pahl was wandering around an antique store and came across a hammer that would be the catalyst for his gargantuan collection. He was so fascinated by the history of the hammer and had eventually collected so many that he decided to open a museum for research and preservation purposes.

So, in 2001, they bought a run-down building on Main Street and started working to make it a functional museum by digging a basement by hand and removing the dirt by wheelbarrow and sled. While doing so, the Pahls found a Tlingit warrior pick, which they took as a sign that they’d chosen the right spot to open up shop.

Between opening the following year and the present day, the Pahls visited the National Museum of American History and met the curator who donated Smithsonian mannequins from the 1970s to the museum, became a nonprofit, started an internship program, established a board of directors, and continued to grow their vast collection.

Some of the highlights of the museum are hammers dating back to the ancient Romans, hammer patents, hammers with historical significance and specific historical names, and so much more. There are also exhibits on the history of the hammer and on the occupations beyond builders, craftsman, and miners who’ve used hammers—from bankers and doctors to musicians and bookbinders and nightclub goers.

Check their website for operating hours, as they do change with the seasons. Admission is $5, and children 12 years old or younger can enter for free with a paying adult.