Best Places to See the Northern Lights in Alaska 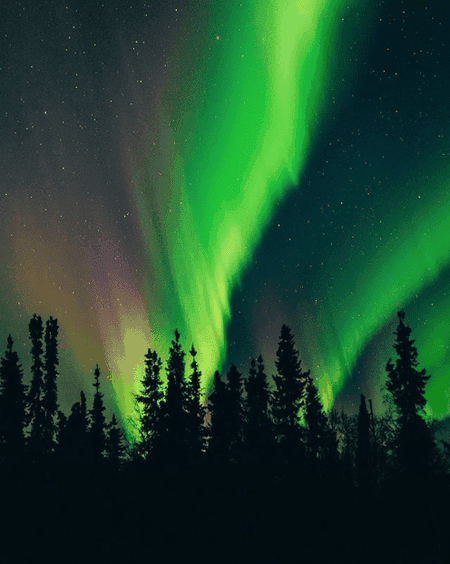 Seeing the northern lights is a bucket list item for many travelers. And rightfully so – watching the psychedelic swirls pulsating across the night sky is nothing short of stunning. It’s not every night that the lights are on display, though. Peak viewing for the Aurora is on clear nights during the coldest, darkest part of winter. But if you’re lucky (and far enough north) there’s a chance you can catch them in late summer and early spring. Here are a few cities where the odds are in your favor.

Probably the biggest city in which you can see the northern lights, Fairbanks is a primo location because of its location under the “Aurora Oval,” meaning 80% of nights in the winter (provided the skies are clear) the lights will be on display. While the best time to catch the show is between midnight and 3 a.m., most hotels will offer wake-up calls if you can’t or don’t want to wait up all night. Otherwise, you might consider joining a viewing party at Ski Land – they have a cozy lodge, hot chocolate, and northward views making for the perfect Aurora trifecta. Bonus: the University of Alaska Fairbanks Geophysical Institute maintains a website (link: http://www.gi.alaska.edu/AuroraForecast/Alaska/20180217) that predicts when the northern lights will be most active.

The towns near Denali National Park pretty much board up shop in winter months, so if you want to see the lights, you’re on your own. That being said, there’s more than six million acres, so finding a private place with little light pollution is easy and your chances of seeing them at the beginning or end of the traditional tourist season aren’t bad. Wait for a clear night and pack lots of warm clothes – the mountain makes its own weather, so conditions can change quickly.

Nome, a remote town on the western edge of the state, is known for being the finish line for the Iditarod Sled Dog Race. The race is in March, which coincidentally is also one of the best times to see the lights. Considering how isolated the village is, you’ll have no trouble finding good viewing spots and if you’re there for the Iditarod, you’ll probably still be up celebrating with the mushers as they cross through The Burled Arch.

Formerly known as Barrow, this city is the northernmost settlement in the United States. Sure, it’s cold, but even from your car the greens, reds, purples, and blues of the Aurora Borealis look stunning as they dance across the night sky. Find a spot on the beach for front row views as the solar flares float above frozen over Beaufort Sea.

With roadhouses and cozy cabins aplenty, this quirky little town is not only positioned well for optimum viewing, but also makes for a memorable locale for waiting on the elusive Aurora Borealis. While the natural wonder is free to view and the odds are good even in town, there are numerous guide operations offering tours that can strengthen your odds.

Roughly an hour and a half from Fairbanks, the Chena Hot Springs are maintained by a resort of the same name. Like Fairbanks, it’s under a band that’s most active for the Aurora, but unlike Fairbanks, there’s little ambient light to muddle the views. Plus, the resort caters to those on a mission to see the northern lights. Beyond just the standard wake-up call, Chena Hot Springs Resort operates a heated log cabin with plate-glass windows on the hillside; has a snow coach viewing tour that takes patrons to a party yurt on a ridge; and an activity center than dispenses hot beverages to keep participants perky until the show is over.

It was partly cloudy and only kp2 (low activity) on my first ever chase of the aurora borealis. This was just a test shot to confirm it was active. Looking forward to hunting clear skies for the next 2 nights. #northernlights #aurora #auroraborealis #nightphoto #nightphotography #longexpohunter #longexpoelite #longexpo #astronomy #astronomical #justgoshoot #green #igs_newtag #ig_world_colors #visitalaska #fairbanks #alaska #snowy #snowroad #arctic #subzero

Not all winter visitors to Anchorage are going to see the Aurora Borealis. It’s Alaska’s biggest city, meaning there’s lots of light pollution that hinders visibility. But on really active nights, if you drive just far enough away from the city lights, you have a chance. Try the parking lot at Flattop Mountain or cruise along the Turnagain Arm until the mountains block town. Then settle in and cross your fingers for a good show.