A Guide to Salmon Viewing in Alaska 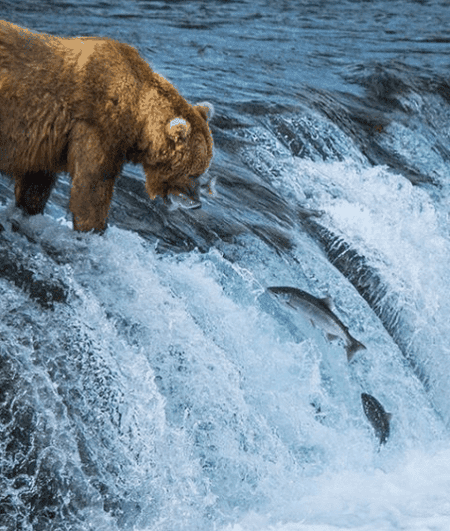 “Salmon” is the word on the lips of many Alaskans in the summer, from the first run of kings in May to the last run of silvers at the end of the season. If they’re not planning a fishing trip, they’re scheming up ways to fill their freezer. Simply put, salmon is part of the lifeblood of the 49th state. Though if you’re not interested in donning a pair of waders and XtraTuf neoprene boots to wade into Alaska’s chilly rivers and streams, here’s our list of top places to watch the salmon runs.

Running through the heart of downtown Anchorage, Ship Creek flows from the Chugach Mountains into Cook Inlet by the Port and is the world’s only king salmon fishery. During summer months, you’ll see anglers combat fishing shoulder-to-shoulder – some clearly still wearing their work attire. There are a couple bridges and viewing platforms from which you can watch the salmon battle their way upstream to spawn.

When most people think of Katmai National Park, they’re envisioning bears (there’s an estimated 2,200 brown bears within the park). But one of the best times to watch the bears is during salmon running season – they fatten up on the sockeyes that swim up Brooks River from June until September. Here you can see salmon trying to leap over small waterfalls and patient bears trying to snatch a snack.

While the mouths of these rivers are too murky and deep to see the various salmon species making their way upstream to spawn, you’ll definitely see the fish being pulled from the water by locals. The most interesting time to play spectator is when the Department of Fish and Game open the rivers up to dipnetting, a practice that allows those who have lived in Alaska for a full calendar year to stand in the water with a 5-foot wide net on a pole and scoop up the fish that swim into it. If the dipnetters hit the run on the changing of the tides they could be pulling in another fish every few minutes (though many Alaskans have their glory story of having two or more fish in their net at once).

Near milepost 52 on the Sterling Highway, the Russian River is a solid spot for salmon viewing. From the campground there are two gravel trails, one leading to a viewing platform perched above the falls and the other to a angler trail along the river. Sockeye and coho run the river between June and September.