A Guide to Alaska's Salmonfest 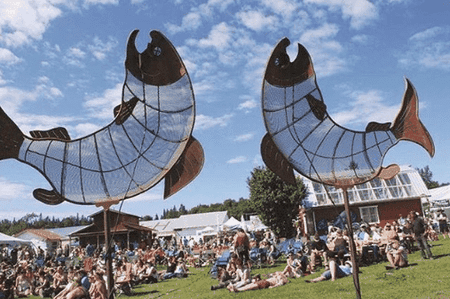 Formerly known as Salmonstock, Salmonfest is the Kenai Peninsula’s biggest summer music festival. Billed as “three days of fish, love and music,” the event swells the population of Ninilchik, Alaska from just under 900 people to nearly 9,000. But beyond what’s mentioned in the festival tagline, there’s also tasty food, local crafts and artwork, Alaska brews, and entertainment for the whole family.

Heading there for the first time? Here’s what you need to know.

Each year the festival comprises a line-up of 50-plus acts, with genres that run the gamut. There’s always a huge selection of local Alaskan favorites, such as Super Saturated Sugar Strings and Blackwater Railroad Company, as well as nationally-known talent (who are sometimes one and the same, as in 2017, when Alaska-raised Jewel performed).

An absolutely huge thank you to the many souls ~ including the Ninilchik community, musicians, vendors, volunteers, crew, and the entirety of the salmonfestfamily ~ for a terrific seventh year. Together, we created a magical, memorable, and musical adventure. We love you and hope to see you all next year! #salmonfest #salmonfestak #2017 #thankyou #festival #family #tillnextyear #loveyouall #musicfestival #salmon

Sure, you probably came for the artists, who you’ll find on the four stages positioned around the festival grounds, but there are also several beer gardens, food trucks and stands selling everything from Thai to sandwiches to barbeque to salmon. There’s also a kids’ area, and a space devoted to organizations working to protect Alaska’s wild salmon, so be sure to wander around.

These guys recently completed another successful and popular Alaska tour and have, by all accounts, become de facto Alaskans. Now part of the Salmonfest family, they'll be joining us again. For those unfamiliar with The Good Time Travelers, they are a multi-instrumental duo with a vibe so big that they have been described as a “2-piece power-trio". Pete Kartsounes and Michael Kirkpatrick have a sound that is rooted in bluegrass and folk music, but the sentiment is pure rock and roll. There are few musicians in the world that fit the description, traveling troubadour or wandering minstrel, more than Tim Easton. Tim has traveled the world playing big stages, nooks and crannies and everything in between. Perhaps Salmonfest's greatest wandering ambassador, he is one of only two or three musicians who have been with the festival 7 years running. Once again, welcome back Tim Easton! #goodtimetravelers #happiness #headliner #salmon #summer #comesooner #comingsoon #music #musicfestival #party #partyforever #love #like #rockon #salmonfestak #salmonfest2017 #Salmonfest #cool

Located on the Kenai Peninsula Fairgrounds in Ninilchik, the event is south of Kenai and north of Homer on the Sterling Highway. By road from Anchorage, follow the Seward Highway to the Sterling Highway. The fairgrounds are at Mile 136. Alternatively, flights are available from Ted Stevens International Airport on Ravn Alaska to Kenai or Homer (46 and 37 miles from Ninilchik, respectively).

Most of the revelers in attendance will be camping at the nearby fairgrounds. The most convenient is located across the street, but you need to reserve early – they sell out weeks in advance. Also, close to the festival grounds are the J&J Smart Charters/Deep Creek View Campground, Alaska Angler RV Resort, Ninilchik River Campground, Deep Creek North Scenic Overlook, Deep Creek Beach State Recreation Area, and All Seasons Campground. Each of those locations are also stops on the free shuttle to the festival.

However, if you’re not interested in roughing it, accommodation can be found in the nearby towns of Anchor Point, Homer, Kasilof and Kenai.

Wondering if you'll be able to come to the festival? While we tried to make the festival as affordable as possible, we do understand that there are times in all our lives when we can't afford certain luxuries. Consider joining the #salmonfestAK team, and become a staff member for the weekend! Still few slots open, but they're closing fast. Contact Sally@salmonfestalaska.org for more info! #fun #summer #livemusic #sun #staff

Various conservation groups teamed up in 2017 to try to establish Salmonfest as a zero-waste festival, to reduce the event’s overall impact on the grounds. Last year the festival employed a Zero Waste Crew to man waste stations to help festival-goers determine whether their garbage was compostable, recyclable, or trash.