Found in Willow, Alaska, a town better known for being the start of the official Iditarod race, this unusual building is often referred to as the “Dr. Seuss House” thanks to its whimsical architecture. However, owner and creator Phillip Weidner has said its actual name is the Goose Creek Tower.

The 185-foot-tall (56-metre-tall) structure looks like several houses stacked atop each other, which it basically is. Weidner started with the original 40-by-40-foot (12-by-12-metre) log cabin and then realised he could construct pillars that would allow him to put another house on top. And then another. And another. Each getting smaller as they ascend into the sky. 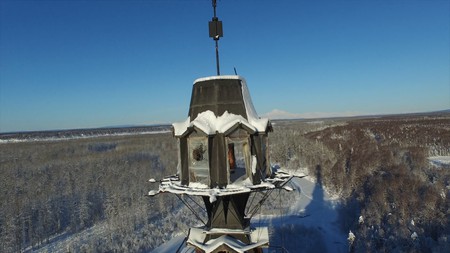 The view at the top of the building, from which you can see for over 300 miles | | © Culture Trip

Don’t expect much more height on this quirky house, though – they stopped at 185 feet, as 200 feet (61 metres) is officially federal air space, though it’s possible to see for around 300 miles (480 kilometres) from the top.

Weidner has been working on the project off and on since the late ‘90s (he’s a lawyer in Anchorage, which keeps him busy). The major building is finished, but it’ll take a while before the interior is done and the building is habitable. Weidner said he’d like to make the first few floors rooms for his family to stay in.

The building is privately owned and the owner isn’t offering tours (it’s still a construction zone, so it’s not safe to enter), but it’s possible to see the house on the train heading north. Weidner said once the building is finished, he may open up the outside for visitors to come and see.